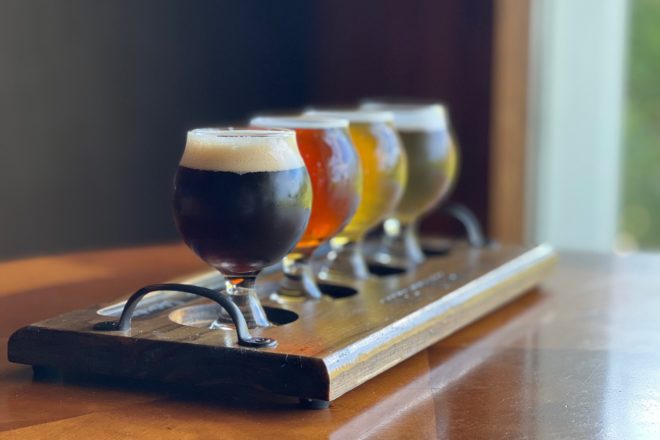 “German beer is brewed according to Reinheitsgebot, a law adopted in Bavaria in 1516 which permits only water, hops and malt as ingredients. Yeast was later added to the list.”

Who says nothing good happens after midnight?

It was well after that hour in 2018 when Kevin Lawell and David Kurth were finishing up a shift at the Mink River Basin in Ellison Bay and started kicking around ideas for a restaurant to put in the old Hillside Motel location up the hill.

“What about German food?” one of them asked the other. And as they considered the expansive wood-paneled walls, towering fireplace and vaulted ceiling, the thought of a German beer hall kind of place started to feel right. They joined up with Mink River Basin owner Linden Ray, and Hügel Haus – German for “house on the hill” – was born. There was just one rather significant problem.

“There weren’t any taplines,” Lawell said. “How do you open a German restaurant without German beer on tap?”

So they got creative, transformed a coat rack space into a tap station, and set themselves up for the area’s only German-focused beer menu. For those for whom the IPA craze has passed, it’s a welcome change of pace.

German beer is brewed according to Reinheitsgebot, a law adopted in Bavaria in 1516 which permits only water, hops, and malt as ingredients. Yeast was later added to the list. The law has been altered over time, but its basics remain in effect, giving German beer a distinctive flavor.

Wisconsin versions are sprinkled into the list, including a Hinterland kolsch and a Lawell favorite, New Glarus Staghorn.

“People like trying something different and getting introduced, or re-introduced to it,” Lawell said. And Lawell is happy to provide introductions. Hügel Haus has been around just four years, but it has gained a loyal following for Kurth’s menu, billed as “German inspired, Wisconsin influenced,” but also for a casual, welcoming bar.

On Sept. 24 that vibe spills onto the front lawn at the 4th annual Oktoberfest celebration – a not-so-serious nod to the famous German tradition with food, friends and plenty of polka.