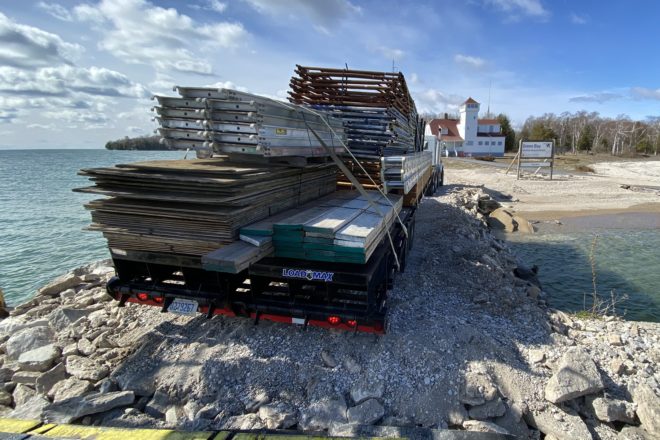 The Friends of Plum and Pilot Islands (FOPPI) recently received a $200,000 grant from the David L. and Rita E. Nelson Family Fund, a donor-advised fund within the Community Foundation for the Fox Valley Region. The front range light will receive a new coat of paint and foundation repairs, and the watch and lantern rooms of the 65-foot-tall rear range light will undergo a makeover, including new paint and tempered glass to replace the cloudy Plexiglas windows.

Company president Frank Mihm first got into the business of lighthouse restoration 17 years ago when preservation architect Ken Czapski, based in Marquette, Michigan, couldn’t find any contractors who were willing to bid on work planned for the Detour Reef Lighthouse in northern Lake Huron.

“We like to do extreme projects,” Mihm said while riding the ferry across Death’s Door. “We lost two boats while working on Detour Reef.”

That first lighthouse adventure must have whetted Mihm’s appetite because since then, Mihm Enterprises has done restoration work on 16 Michigan lighthouses, some of which are in remote and challenging locations.

The work crew plans to be on Plum Island for about six weeks. The U.S. Coast Guard (USCG) has replaced fixed red lights from the towers with temporary portable lights during the undertaking so it can still assist mariners. The USCG plans to install new red-and-white day boards that will also serve as navigational aids.

Washington Islanders Hoyt Purinton and Tom Jordan repaired Plum Island’s ferry landing earlier this spring, readying it to safely receive the trucks and mechanical lifts that would be offloaded. Robert Cornell of the Washington Island Electric Cooperative energized panels near the range lights and the life-saving station for the contractors to use.

FOPPI partners with the U.S. Fish and Wildlife Service, which manages the Green Bay National Wildlife Refuge. Plum Island is open to the public during daylight hours from Memorial Day weekend through Labor Day.

Learn more about FOPPI at plumandpilot.org, and about the islands that make up the Green Bay National Wildlife Refuge at fws.gov/refuge/green_bay.