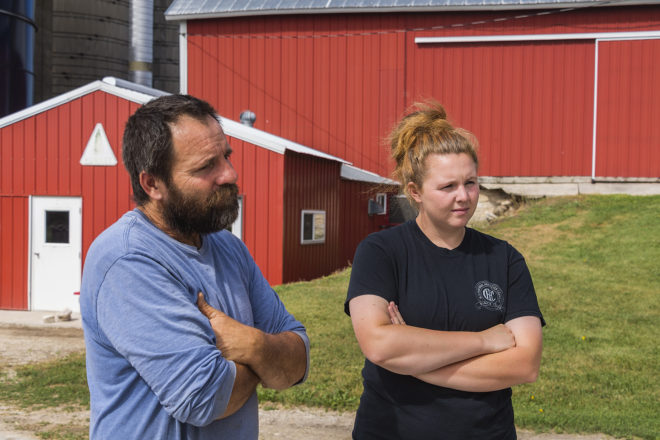 Brian LaPlant is proud that his daughter wants to take over the farm, but said he has never pressured his three daughters to stay in the family business. Photo by Len Villano.

She realized it when she was sifting through college choices as a junior at Sevastopol High School. She probably knew it in her heart even sooner.

Holly LaPlant was struggling to figure out what she wanted to do with her life when it became clear that she wasn’t going to find the answer in the stack of college applications in front of her.

Home is an increasingly rare, small family farm on County Road I, about 10 minutes north of Sturgeon Bay. There her father, Brian, and uncle Brad milk 100 cows in a stanchion stall barn and farm close to 1,700 acres. Her mother, Anne, does the books when she’s not working at Baileys Harbor Yacht Club. Life has never been easy on the LaPlant farm – the hours are long, the work tiring, the commitment total – not the usual recipe to entice a high schooler to consider a career in it. But Holly loves it, and she loves the idea of giving her father a break.

“I noticed how hard it was on my dad, how hard he was working, and I didn’t want him to be by himself anymore,” she said, choking back tears. “My dad was always working long hours, and he would try to make it to sports stuff in high school, but he couldn’t a lot of the time. We understood. It came to a point that I didn’t want him to be by himself anymore. I always loved farming and loved cows and the dairy industry, and that’s when I decided that this is what I wanted to do. I wanted to try and make it a little easier on my family.”

It’s not an uncommon story in the world of the small family dairy farm, where the clock is set by the herd. The cows need to be milked every morning and night – they don’t respect your social life or vacation calendar. It engenders a life of sacrificed moments, skipped outings, drop-in-hustle-out appearances at special events.

Still Holly, now 24, is not just embracing it – she’s buying in.

“It’s a passion,” she said. “It’s been instilled in me since I was young. I love our cows, our long hours and everything we have to do. It sucks, and it’s hard, but it’s a great place to raise a family. It’s pretty rare if you find a daughter who wants to take over the farm. It’s a pretty male-dominated workforce. To be a girl, and you go meet people in the farm community, and you introduce yourself, and everybody is like, whoa! People are extremely surprised. I guess I can be a trend-setter.”

According to the 2017 USDA agricultural census, 36 percent of farms are run by women operators or co-operators. That number has grown dramatically since 1978, though most of that growth occurred on extremely small farms with annual sales of $10,000 or less. Women running a farm such as the LaPlant operation remains a rarity: only 5 percent of women-operated farms had sales of $100,000 or more. Holly is an outlier in age as well: The average age of a farmer has risen to more than 59 years old.

Holly’s father never pressured her or her two sisters into this life – to be the ones to keep the family farm alive. He asks Holly often whether she’s sure this is what she wants to do: to commit to a life shackled to the price of milk and commodities. He and Anne encouraged their kids to play sports, to make their own choices and follow their own path. But those kids also saw a father who loves what he does, who relishes the independence of being his own boss, who loves his connection to his animals, even to a fault.

Robotic milkers would make life easier, as they have for other farmers in the area, and the LaPlants may take that plunge someday if the money is available, but Brian is hesitant.

“For me, not touching that cow every day would be very difficult for me to change,” he said. “It would be like selling them. Some people just have to be around their animals. They’re your extended family. You might think that sounds weird, but it’s true.”

He concedes that he hasn’t met many farmers who are unhappy that they made the switch. That’s a decision for the future. Now Brian is focused on preparing his daughter for the hundreds of other smaller decisions each day brings.

“I’m extremely proud,” he said. “Succession like this, it doesn’t happen very often in this line of work anymore. It’s long hours and very little or no pay. But it’s a good way of life. These kids have been in it for a long time. They’ve seen it all. They know everything when it comes to this.”

They’re still figuring out that succession plan because it’s not easy to transfer a farm from one generation to the next. It’s no longer a few animals and a tractor, but a big business. Holly will buy in over time. After high school, she went to UW-Madison to complete the Farm and Industry Short Course before returning to the farm. Now she’s learning the lessons you can get only through experience.

“We’ll do everything we can to see if we can make her be successful. She’s got what they can teach in the classroom,” Brian said. “The rest of it – the life part – I guess that’s our job basically to help her navigate through the tough times.”

This year has brought some tough times. An extremely wet spring has set planting of their hundreds of acres of cropland back several weeks. In a great year, Brian would have it all planted by May, but usually no later than mid-May. This year they finished June 9.

“And nothing’s growing because it has been so cool,” Holly said. “It’s been tough.”

Each day she goes to work with a mentor who has seen it all in his life on the farm, and still loves the work.

“I honestly don’t see my dad ever retiring,” Holly said.

Not that she wants him to. Dad has a lot of teaching yet to do.