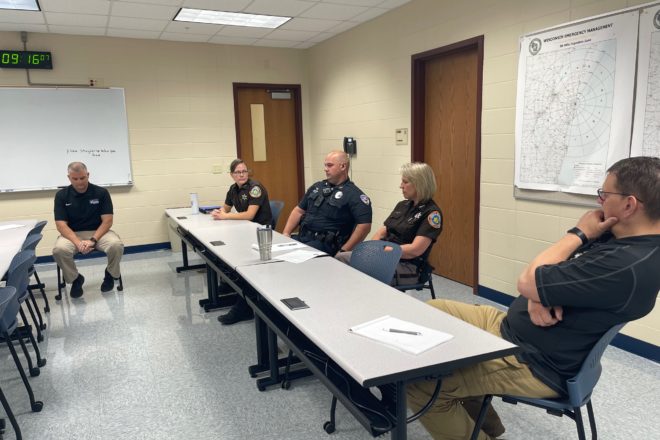 When a school shooting occurs anywhere in the country, its impact extends far beyond the boundaries of its school district, sparking conversations elsewhere about how to keep students safe.

Southern Door school resource officer (SRO) Blake Luebker said he has experienced this increased awareness firsthand, fields questions and has many conversations about safety following an incident elsewhere in the country. While students come to him with questions about why such acts of violence occur, teachers consider which additional security measures, such as building renovations or improved mental-health resources, might be implemented.

Luebker’s position is itself a security measure, according to Chief Deputy Pat McCarty of the Door County Sheriff’s Office. The main goal of the SRO program, “in the world we’re living in today, is to provide a safe school environment,” McCarty said.

Prior to the SRO program, schools had to rely on patrol officers to respond to threats on school grounds. Now, if a threat were to occur, the SRO is the school’s first line of defense until backup arrives. In the case of a school shooting, an SRO’s role would be the same as that of any other police officer: to “identify the threat and eliminate it,” McCarty said.

About 91% of SROs are armed for that reason, according to federal data reported by Education Week. That includes every SRO in Door County.

SROs don’t have control over the latter two recommendations, but they do take care of the first three by making daily rounds at the school, checking doors and ensuring that students are accounted for. At Southern Door and Sevastopol, SROs use the Raptor system to scan visitor IDs.

All of these measures are fairly new for Door County schools. McCarty said the peninsula was “behind the national curve” when it implemented its SRO program only three years ago. Before that, a retired officer worked at Sevastopol and Southern Door schools for four to eight hours a week.

When Tammy Sternard was elected sheriff in 2018, she wanted to incorporate SROs into local schools more formally, so the sheriff’s office planned to launch a pilot program. Then when every local school wanted to be the pilot, Sternard went outside the normal budgetary process for county board approval, allowing the program to start during the 2019-20 school year.

A rigorous hiring process that involves a series of interviews, a written essay and a presentation to school administrators resulted in an SRO for all of Door County’s five school districts – including Washington Island, where one of the two deputies works part time as an SRO and part time as a patrol deputy.

Cyberbullying Is the Most Difficult Challenge

Although school shootings get more media attention than many other school security concerns, addressing other problems such as bullying is a major part of an SRO’s job. And according to Sturgeon Bay SRO Derek Jennerjohn, the face of bullying has changed during recent years because of the rise of the internet and social media.

“It’s not just kids going up to kids on the playground and being bullies,” Jennerjohn said.

Instead, many bullying instances now show up online as cyberbullying, allowing harassment to slip under SROs’ radars and making it more difficult for them to identify the perpetrators.

To curb this problem, SROs teach classes about internet safety and the consequences of bullying, but, Luebker said, bullying remains the most difficult challenge that SROs deal with.

The SRO program’s goal is to ensure the security of a school, and building rapport with students is how SROs achieve that goal.

As she prepares for her first school year as an SRO at Sevastopol, Ashley DePas is looking forward to building relationships with students. That’s what she watched her predecessor, Mark Hilsabeck, do while she was training for the position.

“Kids were crying when he left,” DePas said. “He really had a deep impact on a lot of kids.”

According to McCarty, one way to make an impact is by being present. To this end, Gibraltar SRO Heather Bemmann integrates herself into students’ day-to-day school lives, playing volleyball with them in the gym or dropping into classrooms to read to them.

SROs’ presence extends past the school day, too. Luebker goes to one after-school event a week, collaborating with school administrators to decide which concerts, dances or sporting events he should attend.

With only five vacation days per school year, SROs are a constant presence in the school. It’s through this presence that they gain the trust of the students they serve, often in visible ways, Jennerjohn said. He recalled students who refused to acknowledge him at the beginning of the school year, for example, who later came up to him for high-fives or fist bumps. Jennerjohn referred to these interactions as the most satisfying part of the job.

“We want parents to know we’re here for your kids,” Bemmann said.