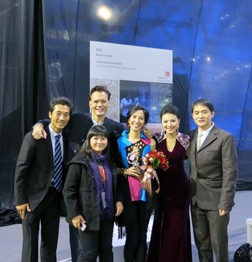 The Linden Centre, developed by Linden Gallery owners Brian and Jeanee Linden, has again received international recognition as being one of the top travel destinations in China. The Centre was chosen by Tripadvisor.com as one of 2014’s Top Three Small Hotels and Top 15 Service Hotels in China.

This past offseason, the Lindens were recipients of a special award given by the United Nations Development Program, the Administration of Foreign Expert Affairs, and Chinese Television. The award, titled, “You Bring Charm to China,” is given every other year to 10 foreigners who have made a significant contribution to the country. The award ceremony, which was held at the Olympic Water Cube in Beijing, included extensive footage on the Lindens’ Door County life.

As part of this recognition, two separate documentaries about the Lindens’ life, and their process of creating the Linden Centre, were featured on the television show, China Right Here.

The Lindens started the Linden Gallery in Ellison Bay in 1996 and have operated the Linden Centre in China since 2008. This winter, the Lindens will lead two tours to their Centre, a Photography Tour with Vision Quest Workshops/Doug Beasley, and their annual Culinary Adventure with the Savory Spoon Cooking School from Ellison Bay. For more information visit linden-centre.com.