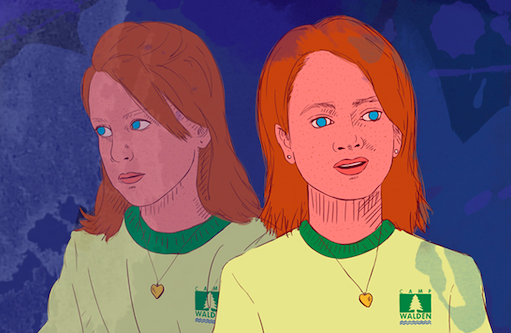 Classic film noir and modern-day audio podcasts don’t sound like a likely combination, but to Alex Genty-Waksberg, it was a natural path to explore, and one that began to take its own shape throughout the process.

This project is called Lindsay: A Radio Play, heavily inspired by 1998’s The Parent Trap with Lindsay Lohan. The movie is about two twin girls whose parents had divorced and each taken a child – so the girls grew up with very different lives on different sides of the world.

The girls meet by chance at a summer camp and decide to switch places upon returning home to experience life with the other parent. Perhaps they’d even be able to reunite the family.

The storyline is interesting enough, but there’s one detail that has fooled many: Lohan plays both roles.

Genty-Waksberg was enthralled with the concept, and the idea for an audio noir took off.

The play continues the misconception: it follows Lindsay on the set of the movie with her fictional twin sister, Sydney. An extra security guard, Marzipan (voiced by lead Annie Fox), is hired fresh out of college when the girls start receiving threatening messages. Though Marzipan was expecting to coast through the job, she ends up becoming obsessed with the case.

Genty-Waksberg began writing the story solo but enlisted the help of college friends Hana Wuerker and Isabelle Platt to help him finish the last few episodes. Then they cast the play, recorded it in December 2016 and brought in Rachel Aronoff to produce it.

Much of the work was done in Door County. Genty-Waksberg was working at Third Avenue Playhouse (TAP) as a production manager and also taught a film noir class.

Most of the play was recorded in New York, but parts were recorded in Marcus Trana’s Sturgeon Bay studio, Painted Recordings. Robert Boles of TAP voiced the series’ narrator, along with TAP voices Bill Theisen and Jennifer Harlee Mitchell.

So why audio noir? Film noir was a classic Hollywood crime-drama style popular in the 1950s. The films were shot in black and white and were often dark and played with shadows.

Wuerker recalled the first email exchange, in which Genty-Waksberg was “conflating the haziness of noir with the hazy feeling of post-grad life.” You’re looking for a place to belong when you graduate, and that feeling is reflected in Marzipan’s character, Wuerker said.

A lot of noir that came out in the ’50s was about men who had come back from the war and had to reintegrate into society. Though he wouldn’t compare the two, Genty-Waksberg said graduating is an intense experience that doesn’t dictate the rest of your life the way you think it will, which led him to combine those ideas.

This sense of feeling lost and looking to belong is also something that many millenials feel as a generation – a twist on classic noir that the team wanted to capture. Plus, The Parent Trap and Lohan’s story are pop-culture icons for millenials.

“All millennials grew up watching Lindsay Lohan movies,” Platt said. “I think it shapes a lot of our generation.”

The culture around child stars is also a theme explored in the play. Lohan is an example of someone whose time under the intoxicating lens of the camera and society contributed to her downfall, seen through the characters constantly wrestling with their own identities, Wuerker said.

They explored “the way that people are attracted to young people and sexualize them and are disappointed when they actually do grow into full-fledged humans,” Genty-Waksberg said. “There’s this back-and-forth where we want them to stay young forever, but we also do make them into these sexual beings,” Genty-Waksberg said.

Lohan is an iconic representation of this pattern that couldn’t be ignored.

“With the world as trashy as it is now and kind of feeling depressing, looking at Lindsay Lohan’s arc and seeing the way we kind of all ruined her and her experience – she’s a reflection of a lot of things gone wrong,” Genty-Waksberg said.

Though they’re working with heavy themes, the team has aimed to create a balance of seriousness and comedy, Wuerker said. The music, by composer Tree Palmedo, plays heavily into the noir style: suspenseful and dark in tone. Marzipan’s voice also has a darker tone, but it’s balanced out by snarky, fast dialogue and the fact that she’s usually smoking marijuana.

“Usually in noirs they’re chain-smoking cigarettes, but she’s chain-smoking weed,” Wuerker said. “It was always playing with these details.”

“It’s the biggest thing we’ve all done together,” Wuerker said. “We’re super, super proud of this and couldn’t be more excited.”