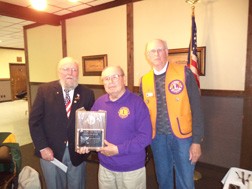 Lion Pflieger is in her second term as president for the club. She was number one assistant to her husband Pat when he was District Governor of 27 B-2. She has been most active in the Door County Lions Vision Screening program providing eye examinations for children in the county schools.

Lion Phillips has been an active member of the local club, working on many of its projects and serving on the board of directors. He has been involved in the many building projects for Habitat for Humanity.

Lion Radosevich has been chairman of the Annual White Cane Day for many years which has raised funds for the many sight programs that the Lions provide. He has also been involved in the transportation of donated eyes to be used in transplant.