There’s a common spring flower of the Door Peninsula that nearly everyone can identify. And that’s saying something, considering the average American recognizes thousands of logos for commercial products, yet can properly identify fewer than five plants that grow in her/his area.

Not only is this plant a great vegetable, it’s also medicinal. It was brought to America centuries ago for this very reason. And yet, a lot of people only want to kill it, usually with toxic chemicals. It’s been called a lot of things: Priest’s Crown, Irish Daisy, Swine’s Snout, Milk Witch and Peasant’s Cloak, to name a few. But regardless of its name, the dandelion is a very familiar plant. Its current name comes from French “dent de lion,” or tooth of the lion. 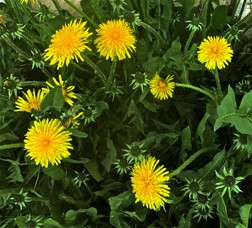 Of course, being known doesn’t mean you are popular. Lawn care companies go to great lengths to convince potential customers to buy their products to kill broad-leaf plants, and create a smooth barren grass monoculture, which is supposed to be desirable. Of course they don’t mention the collateral damage. The Agent Orange component (2-4-D) is often part of the mix (known as “weed and feed”). A quick Google search of 2-4-D hazards is very telling. It’s considered an endocrine disruptor, is carcinogenic, will make lawn toxic, particularly to children, pets, and wildlife, will travel indoors on shoes and sully carpeting, and it lasts indefinitely. The Natural Resources Defense Council (NRDC) has a lot to say about toxic chemicals that should be better regulated. Just Google 2-4-D hazard, the NRDC website should come up.

Dandelions, because they are broad-leaf plants, can serve as a great barometer. When our son and daughter were young, we often took them to parks, zoos, botanical gardens and nature centers. If we didn’t see dandelions (or clover) in the lawn, there was a very good likelihood the broad leaf herbicide 2-4-D was being applied to promote a grass monoculture. We would simply get back into the car and go elsewhere rather than subject our kids to the unnecessary risk of exposure.

Dandelions very likely were brought to America on the Mayflower, not hidden in livestock feed, but rather as medicinal and garden plants. They have been used for both food and medicine for thousands of years. Up until the 1800s people would pull grass out of their lawns to make room for dandelions and other useful plants. In many places, dandelion leaves are a preferred salad green, and are more nutritious than most of the vegetables in your garden. They aid in digestion and promote health. The younger leaves are preferred.

These little flowers are actually good for your lawn. They loosen dense soils and cycle nutrients to the surface with their deep roots, fertilizing the lawn (for free).

Dandelions are very hardy pioneering plants that can survive in harsh conditions of disturbance. By their very presence, they reduce severity and help other plants to succeed.

I received a promotional mailing from a chemical applicator with one of those nice sounding names, implying green, lush, healthy, take a walk with no shoes on, verdant lawn. Using their self-addressed stamped envelope, I sent back a note letting them know they were trying to convince me to subject my yard, children, pets and wildlife to a major ingredient in “agent orange,” known as 2, 4-D. Toxins applied to kill one thing, often don’t know when to quit, and will spread out and keep killing. I recommended some websites for information regarding this poison.

Perhaps dandelions are disliked because they represent both the “wild,” and the “tame,” in a literal sense. Even though they have long been propagated in gardens, they also thrive in the wild. “Wild” comes from “willed,” implying that it doesn’t readily submit to man’s will. It pretty much grows wherever there is space available. Generally this implies disturbed areas, or places where they may not be welcome. They are very good at growing in sparse conditions. Dandelions have one of the longest flowering seasons of any plant. Seeds are often carried as many as five miles from their origin! This familiar garden plant is now found around the entire globe.

Dandelions could be blamed for polluting more waters than just about any other plant. This is because every year Americans spend millions on lawn pesticides to have uniform lawns of non-native grasses. More than 46 million pounds of 2-4-D is applied annually in the U.S., with a little more than half in agriculture. We use 30 percent of the country’s water supply to keep lawns green. As Pogo said, “we have met the enemy and he is us.”

We are clever enough to invent poisons that will kill broad-leaf plants but not wise enough to know that unnecessary use of toxins will cause extensive and unpredictable collateral damage downstream. As Henry David Thoreau said: “What are we to think of the doctor whose cures are worse than the ills he treats?”