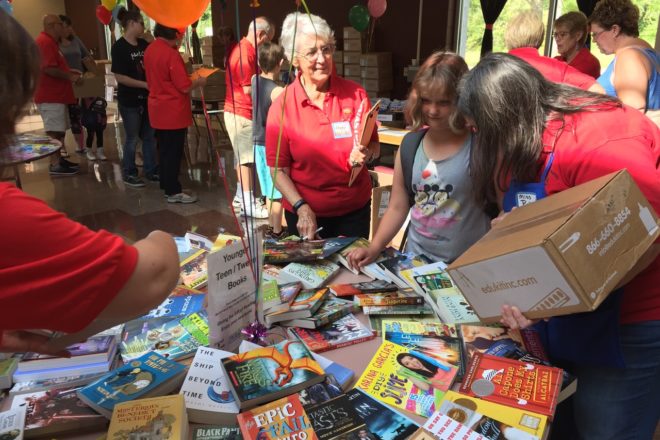 In all the hubbub of activity at the Dec. 21, 2018, dedication of the 41st Door County Habitat for Humanity home — with new homeowners Jacob and Amanda Purdy throwing open the doors of the new home to the media and the public — the five Purdy children seemed to shut out all the activity surrounding them as they began examining new books in a bookcase donated by Altrusa of Door County.

“Now they have a start on their own library,” said Altrusa member Nancy Kexel-Calabresa. “That focus on books is important. If they are young, they will continue to receive books from Altrusa, and we encourage people at home to read to them.”

Literacy has always been a focus of the organization, which celebrated its centennial in 2017.

Known today as Altrusa International, the organization began in Nashville, Tennessee, as the Altrusa Institute. Founded by Alfred Durham, who belonged to the Kiwanis, the idea was to create a service organization for women during World War I when their role in society was expanding beyond that of traditional homemakers.

It became Altrusa International in 1935 when the first club in Mexico was formed, and it now has clubs around the globe.

“Our club was founded in 1988,” Kexel-Calabresa said of Door County’s branch. “We’ve had five programs in place for a long time, so we’ve gotten pretty good at each one.”

The largest of the five Door County Altrusa programs is the annual Back-to-School Fair, which Kexel-Calabresa spearheads.

Last year’s event — the 21st for the club — was held at Sturgeon Bay High School on Aug. 4 and served a record 619 children by providing them with backpacks, age-appropriate school supplies, books, water bottles, personal-hygiene items, spirit shirts for whichever school they attend and a voucher for gym shoes.

“We get a lot of really positive feedback from the schools, and they are very happy to partner with us the ways they can,” Kexel-Calabresa said.

While the schools may be happy with the program, the real measure of success for the Altrusans and other volunteers who help with the program has to be the big smiles on the children’s faces as they make the rounds to pick out a new backpack, books and the other items.

“The children arrive at school with new things and grade-specific school supplies, and they don’t have self-esteem issues when they go to school,” Kexel-Calabresa said.

“Five times a year, Altrusans will go into all the schools in Door County and read a certain age-appropriate book. They will read that book to 4K and 5K children,” Kexel-Calabresa said.

In addition, every child in the class gets a copy of the book, and the classroom gets one as well.

“They get a total of five books from Altrusa in a year and are encouraged to have someone at home read to them. Last year we distributed 350 books,” Kexel-Calabresa said.

The Altrusans also operate the Born to Read program.

“Each time there’s a birth at Door County Medical Center, we give two board books to the new mom, and mothers are encouraged to read to the babies right away, which we hope fosters a love of books and language,” Kexel-Calabresa said.

The club also has a scholarship program: Twice a year it provides $750 scholarships for up to five qualified female applicants.

“These are women who are returning to school after they have been out for a while, to better their job prospects. They’re going back to school to get a degree to improve their lives,” Kexel-Calabresa said.

She described the club’s final project as “small but a very exciting and well-appreciated one. We have a member that translates children’s books into Braille. She does it with a machine that makes imprints that can be applied over the regular texted word. When a sighted reader reads the text, the child can touch the Braille bumps that are pasted into the book and read along.”

Those are supplied to the Wisconsin Center for the Blind and Visually Impaired in Janesville.

Of course, it takes a caring community to support all these efforts. Altrusa raises funds through several programs, including a Holiday Extravaganza that draws 300 women each year. Marine Travelift puts on a golf outing in which all funds go to support the Back-to-School Fair.

Kexel-Calabresa and her husband moved to Door County in 1988 — the same year the organization was formed here — but it took a few years before she joined the club.

“My husband saw a picture of an Altrusan involved in some project, probably in 1991,” she said. “I wasn’t very well connected to the community at all, having moved here from Milwaukee. I looked into Altrusa and joined in January 1992. It was just a good fit for me to connect with other women and become involved in the community. Now I’m very involved in Altrusa, and my husband sometimes feels a little neglected. It really is a great mission, and it’s a great way for someone new to the community to make a very worthwhile connection.”