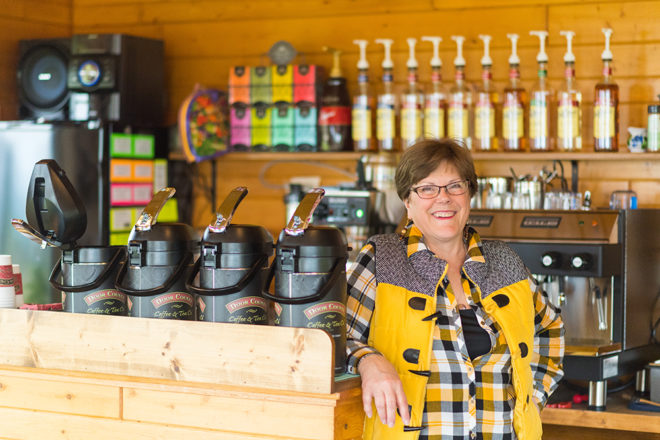 Little Bit LeClair in her newest business venture, A Little Bit of Coffee, in Jacksonport. Photo by Len Villano.

If you ask a group of old-timers in the county who Elizabeth LeClair is, chances are you’ll get a puzzled look from several of them. But change the first name to Little Bit, and faces will light up in recognition. It’s understandable. The name Elizabeth lasted only a day or so.

“The day my parents brought me home from the hospital,” Little Bit said, “the youngest of my five older siblings asked what my name was. My mother said, ‘Elizabeth Ann,’ and three-year-old Michael said, ‘Little Bit Ann?’”

The Ann was soon dropped, but Little Bit stuck, and she has done more than a little bit to enhance the place where she’s spent most of her life. She grew up in a 1912 farmhouse on Cherry Road, where her family, the Overbecks, had a dairy and later Bonnie View Orchards.

“I was a horrible cherry picker,” she said. “As a child, I spent my time riding horses, climbing trees and daydreaming.”

The community service for which Little Bit is so well known grew out of a tragic event when she was 16.

“For four or five years,” she said, “I’d been baking brownies and cookies to send to my three brothers who were serving in the military in Vietnam. Philip, who was 21, was due to be discharged soon, and he wrote and asked me to have his dress uniform cleaned and sent to him, so he could wear it home. I mailed it on a Friday, and on Saturday morning we were notified that he’d been killed.

“It was a life-changing thing for me,” she added. “I thought of all Philip would have accomplished if he’d lived, and decided that for the rest of my life, if anyone asked me to do something, if it was possible, I’d always say yes.”

She’s said yes many, many times.

While her children Aaron, Nathan and Courtney were growing up, she spent nine years as a leader for four different Scout troops. Nineteen years ago, she joined the Harborettes Club of Egg Harbor and Fish Creek, part of the Wisconsin Association for Home and Community Education (HCE), and has been a board member for 18 of those years.

“We’re a bunch of do-gooders,” Little Bit said. “We recently had a mending day at the Jacksonport Town Hall, where we repaired rips, sewed on patches and replaced buttons free of charge. The bake sale that day helped to support other club activities. The brat fries we hold several times a year at Welsing’s Foodland and BP Station in Valmy are also fundraisers for club projects. We partner with Wisconsin Public Television in Wisconsin Bookworms, a huge statewide program that provides each student in grades K – 4 with a set of books each year they can take home to keep. Each set costs $25 and our club helps to pay for them, as well as making a book bag for each child. Along with other HCE clubs in Door County, they also read to children in preschools once a month.”

Little Bit is also proud of two other programs the club supports through fundraising activities:  the Wisconsin/Nicaragua Partners of the Americas, which gathers old sewing machines, fabric, buttons, scissors and other supplies to send to Nicaragua; and Pennies for Friendship Filters, providing safe water for households in Africa.

Since 2008, Little Bit has served as Jacksonport’s representative on the Door County Tourism Zone Commission, established by county municipalities to collect a 5.5 percent tax on room rentals. The money is used, in partnership with the Door County Visitor Bureau, to encourage tourism.

Those activities could easily fill the days of most people, but they hardly make a dent in Little Bit’s calendar. In 1984, when she had a five-year-old, a toddler and was seven months pregnant with their third child, Little Bit and her then-husband, Joe LeClair, built the 17-room Square Rigger Lodge on Highway 57 in Jacksonport. In 1986, they bought the five cottages that had been a part of Scott’s Lake Breeze Motel and Cottages next door, and in 1987 they built the Galley Restaurant, continuing the nautical theme. Their popular fish boils began that fall and continued until 2012, when the Galley closed.

This summer the former restaurant has reopened as A Little Bit of Coffee — no full meals, no fish boils, but a cozy space seating 35 for conversation, coffee, cappuccino, espresso, hot chocolate, smoothies, tea and Little Bit’s homemade pastries. (No charge for the great view of the water.)

She’s excited about the new venture, although it requires getting up at 5:00 am seven days a week, year round. Hours are 6:30 am to 2:30 pm. The motel, five cottages and two housekeeping units are open May 1 to October 31. Little Bit has managed the entire operation on her own since she and Joe divorced in 2001, but she emphasizes that the business was Joe’s dream and it took a lot of teamwork to make it a success.

Little Bit has a bachelor’s degree in home economics, with an emphasis in fashion merchandising. Somewhere through the years she found time to serve as a volunteer driver for the Red Cross and as an assistant to the elderly or disabled for Home Instead. She spent two-and-a-half years as a seamstress in Beth Peterson’s high fashion shop. And she’s created wedding gowns — 15 of them, all hand-sewn, beaded and embroidered. The one she made for her daughter has 30,000 individually sewn beads.

The little girl who was a daydreamer grew up to be a lady who gets things done.