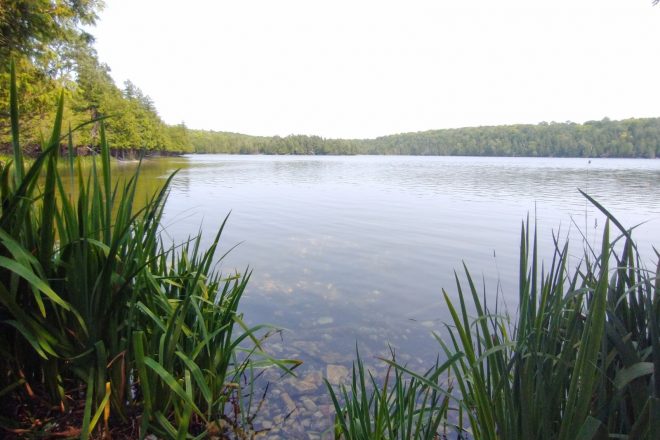 The restoration of Sturgeon Bay’s Bradley Lake – the body of water at Sunset Park commonly known as Little Lake – is being put off until next year for further review and additional funding.

Rather than do a scaled-down project this year with a budget of $400,000, the Sturgeon Bay Common Council approved three motions June 21 to:

• Reject all bids and cancel the project as proposed for this year;

• Direct Finance Director/City Treasurer Val Clarizio to set aside the amount budgeted this year for the project for possible application next year; and

• Direct City Administrator Josh VanLieshout to organize a study group to formulate the next steps for the lake’s restoration.

Two weeks earlier, the council delayed a vote on the project after the two bids the city received were hundreds of thousands of dollars over budget. The city had hoped to negotiate a reduced scope of work with the low bidder, Michels Construction of Brownsville.

VanLieshout said the company agreed to do a stabilization project for $350,000 with about 400 feet of shoreline, compared to the original project, which called for more than 1,200 feet of work.

“The work that would be done would not be visible to the [residents in the area] – basically underwater work and some vegetative plantings,” he said.

Had the project proceeded, VanLieshout said the aesthetic improvements to the lake would likely have been minimal, with some trees lost during the construction process.

“This could be money you’re not going to see the material benefit from,” he said.

Mike Barker, municipal services director, said the shoreline stabilization work “would be more typical to be seen along a riverbank or a creek bank, or an area that has a lot of wave action. In this case, it’s kind of probably not 100% needed,” he said.

Barker said he questioned whether “the juice is worth the squeeze on this one.”

City Engineer Chad Shefchik said the city has “paid a lot of money to consultants and staff time pursuing grants that aren’t really there because the lake isn’t contaminated. That’s one of our uphill battles. We’re looking at more of an aesthetic project than a cleanup project. I think we’ve been misled by our consultant.”

Shefchik said the biggest issue people have about Little Lake is that the water gets murky in mid- to late summer, and the city would be better off with a consultant who deals with retention ponds.

Mayor David Ward said the city does not currently have $1 million or more available to rehabilitate the lake the way it should be done. Instead, Ward said the city should “squirrel away the $350,000 or $400,000, and next year do a project that’s big enough to really do the job.”

Ward said the purpose of the rehabilitation is to “get rid of the scum on the lake, for lack of a better term.”

District 5 Alder Gary Nault, who is involved with the annual Kids Fishing Day at Little Lake on Father’s Day, said the lake has “a lot of debris. There’s a lot of tree branches in the lake. There’s a lot of floating wood. It’s probably the worst it’s ever looked.”

He said the city should be “done with studies” and have its own staff look at rehabilitating the lake.

“I think with all the studies we’ve had, we really should put them all on the table somewhere and circle all the ones we think are a great idea and some that are a good idea and some we can’t afford to do,” Nault said. “Take up all of them, since we have invested in those, and maybe the fishing piers or the kayak launch is something we want to do. Circle what we think is good. Be our own contractor, and then work from there.”

Nault also suggested having a water-aeration system for the lake.

“If you oxygenate water, it doesn’t get green and slimy,” he said.

Nault said the council should see what it can afford to do for the lake when it puts together next year’s budget this fall.

District 1 Alder Helen Bacon said she wants to do something, which could include dredging, to rehabilitate the lake.

“We need to have some discussions going forward and make some decisions in that way, but I think everybody needs to remember we reinforced our shorelines with money that was designated for the lake,” she said.

Bacon said that money was redirected when the city dealt with a high water level on the bay.

District 2 Alder Dennis Statz said the city needs to reassess what to do about the lake before moving forward.

“Hopefully staff will be able to come up with something, too, that will make some sense,” he said. “Perhaps the dredging part, as Helen is saying, too, is really what we need there.”