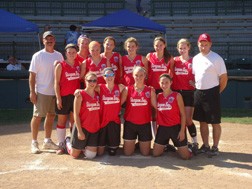 Sturgeon Bay lost its opening game to Columbia, Mo., 12-11. They scored eight runs in the top of the first inning, but Columbia battled back and won in the bottom of the 7th inning. Demi Ploor was three-for-three for Sturgeon Bay in the game, and Lauren Kita, Rachel Miller and Hannah Abrahamson all had two hits. Kita also had three RBIs.

In its second game, Sturgeon Bay got just two hits and lost, 11-0, to Poland, Ohio, which was rated as one of the top 20 teams in the country and would eventually lose to a team from Escanaba, Mich., in the regional championship game.

Sturgeon Bay lost their third game against South Bend, Ind., 4-1 as they recorded 6 hits for the game.