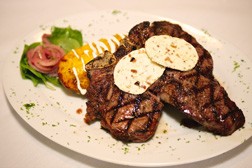 “We raise our own beef cattle and know beef. The steak at CHOP was one of the best we have ever had.”

“CHOP never disappoints. Staff is always accommodating and consistently meets our dining needs. A MUST stop for us!”

“Small restaurant with everything under control.”

Those are just a few of the five-star reviews CHOP in Sister Bay has received from diners who use the online service OpenTable to find restaurants, make reservations and then write about the experience.

It was those kind of responses from diners that earned CHOP a spot in OpenTable’s 2014 Diners’ Choice Award for the Top 100 Steakhouses in America. The list spans 32 states and includes just three Wisconsin steakhouses.

“There are two Milwaukee restaurants on there and little old CHOP,” said Jody Wuollett, who with his wife Patsy owns CHOP and the Baileys Harbor restaurant Pasta Vino.

“It really is an honor,” Wuollett said. “There is an awful lot of competition out there for that segment, believe me. It’s one segment of the business that will never die, steak and seafood. The list is a great cross-section of a lot of great restaurants. Some I’ve been to, but many I haven’t. To be included in that group is pretty amazing. The statistics are phenomenal – five million reviews, almost 20,000 restaurants. They segmented it first by restaurants and then by steakhouse. To be a favorite among those reviews, it says a lot.”

Asked what he thinks diners are responding to at CHOP, Wuollett said, “I think they find CHOP to be somehow delightfully different, compared to the Del Frisco’s and the other steakhouses I’ve been to. It’s not an elaborate set-up. A lot of them don’t have display kitchens, and we do.

“I think for most people, it transcended the food. It’s about the food, for sure, but it’s also about creating an experience that people not only want to have again, but they want to tell other people about it. We’re just different enough, I guess, there’s enough there for people to grasp onto that is different, unique. We cut all our steaks to order. We don’t hide them under a bunch of heavy sauces, and we definitely know how to cook steak, and we buy great steak to start with. 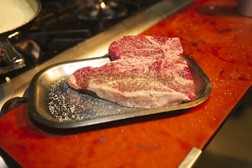 20 oz. porterhouse steak ready for the grill at CHOP restaurant in Sister Bay.

“We’re pretty committed to putting out a great product at a great price,” Wuollett continued. “I went through the list and I’ve been to a handful of them, and one of the big differences, we still feel it’s absolutely critical to provide a full meal with a first course of soup or salad. Almost every other steakhouse on that list is an a la carte situation where for $45, here’s your steak. Oh, you wanted a baked potato. That’s $10. Oh, you wanted a vegetable. That’s $12. We still believe in a complete meal package. Our whole philosophy at either restaurant is great food, great service, a fun, lively atmosphere and value, always those four things have to be in place to make any restaurant truly successful. We offer a totally different environment from the rest of those guys.”

So, what does making the list mean for CHOP?

“In the short run, it’s really just something we can hang our hats on and say, that’s a lot of competition that we’re rising above,” Wuollett said. “In the long run, I think it benefits us because I think people who use OpenTable are going to be looking for the top of the top.”

The two Milwaukee steakhouses that made the list are The Capital Grille (a chain that earned a total of eight spots in the Top 100 list) and the Five O’Clock Steakhouse.