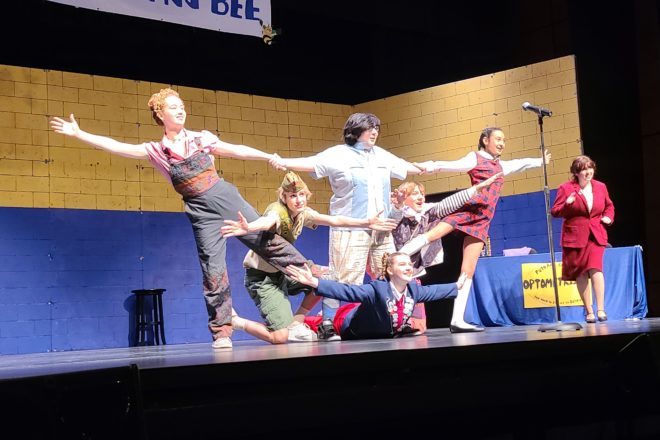 After two years without a live performance because of COVID-19, The 25th Annual Putnam County Spelling Bee will be on stage “live and in person” at Door Community Auditorium on Friday and Saturday, April 29 and 30, at 7 pm; and Sunday, May 1, at 2 pm.

The Tony Award–winning show premiered on Broadway on April 15, 2005, and closed on Jan. 20, 2008, after 1,136 performances. It chronicles the experiences of six adolescent overachievers vying for the spelling championship of a lifetime at Putnam Valley Middle School in Putnam County, New York. The spelling bee is the one place where these quirky, but charming “outsiders” can both stand out and – maybe, for once – fit in. Flashbacks and insight reveal personal details about each of the spellers, exploring the idea that winning isn’t everything.

This musical is unusual in several ways. It treats audience members as if they were the audience for the fictitious spelling bee and singles out audience members as “family.” For example, an age-appropriate woman seated near the stage will be addressed as “Mom” by one of the spellers. After a misspelled word when he was distracted by an attractive female audience member, another speller is the first contestant eliminated and is forced to sell snacks in the audience like a hawker at a sports event.

About 30 minutes before the show begins, audience members can sign up in the lobby to participate in the show as “spellers.” They will be taken backstage prior to the show, shown where to stand when called from the audience, and instructed what to do when it’s their turn to spell (such as requesting a definition of each word and its usage in a sentence, and always attempting to spell each word). During the performance, the actors sitting next to the audience participants will whisper hints about when to stand, sit, move in “slow motion,” “freeze” or “hang on” because the seating-platform unit is about to spin.

Lizbeth Thomas, who is directing her 36th Gibraltar musical, said, “We are overjoyed to bring this delightful show to the Door Community Auditorium. In this building year for our theater program, we are discovering some exciting, new talents and celebrating the participants who have been in our program for many years. The ensemble works so beautifully together, supporting each other both onstage and off. Together they have created a very entertaining show!”

Tickets are available at the Door Community Auditorium box office at 3926 Hwy 42 in Fish Creek, or by calling 920.868.2728. Prices are $10 for adults and $5 for seniors and students. Because of mature content, the production is rated PG-13.