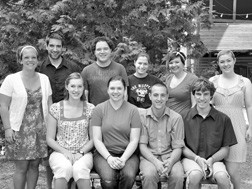 Tucked between lush woods and the vibrant bay, surrounded by blossoming gardens and friendly faces, resides Peninsula Players Theatre, America’s oldest professional resident summer theatre. Each spring the theater awakens when members of the Peninsula Players family welcome 10 interns looking forward to the opportunity to live, play and work side by side with professionals in the industry.

They gather from all over the Midwest, including Wisconsin, Minnesota and Illinois, looking to enhance their knowledge and experience in their designated fields. Eight production interns rotate duties every three weeks between the scene shop, costumes, properties and backstage running crew duties such as lighting and sound.

Two serve as administrative interns, assisting in the box office, managing the canteen and serving as audience liaisons as house managers. All together, these interns rolled up their sleeves and took on the Peninsula Players 76th season.

Peninsula Players patrons may meet the interns over the course of the season as they also usher, park cars and sell tickets in the box office. They are recent college graduates or will soon leave Peninsula Players to return to their academic program, having spent their summer immersed in the craft of theater.

Peninsula Players introduces the 2011 interns, without whose hard work, commitment and dedication the 76th season would not be possible:

• Carole Alt of Saukville, Wis., earned a BFA from UW – Whitewater in theater performance. As an actor, Alt enjoyed her time on stage with the actors during The Importance of Being Earnest, studying their techniques and styles, and taking notes for her own career. “The actors’ characters come to life, and to be a part of that feels so great,” Alt said.

• Nicholas Osenberg of Anoka, Minn., attends Ripon College, pursuing degrees in theater, classical studies, educational studies and history. He has learned how to create sound cues in an industry-standard cueing program and has learned where his true passion lies. “I’ve enjoyed working with professional sound designer Cecil Averett during Making God Laugh, learning from him and building my professional network,” Osenberg said. 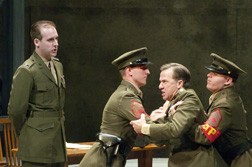 • Rebecca Beaudoin of Wauwatosa, Wis., is a graduate of Columbia College, Chicago and holds a degree in scenic design. “One of my favorite opportunities has been the chance to paint with scenic painter Brigitte Lehmkuhl on the set of The Importance of Being Earnest,” Beaudoin said. “It was fascinating watching her work and learning from her.”

• Michael Trudeau of West Bend, Wis., earned a BFA in Design Technology from UW – Stevens Point. He hopes to continue developing his skills as a master electrician and carpenter. “I really enjoy working in the scene shop,” he said. “It’s satisfying knowing when a set goes up that I have contributed and helped build that set.” He also enjoys the atmosphere at Peninsula Players immensely and loves working in a professional theater environment.

• Sarah Larson of Milwaukee, Wis., is an administrative intern this summer and a senior at Viterbo University in La Crosse, Wis., pursuing a double major in Music Theatre Performance and Arts Administration. “I’ve had a blast house managing and getting to know the ushers I work with,” Larson said. “I have fallen in love with the Door County community.”

• Katherine Clanton is a recent graduate of UM – Twin Cities with a BA in Theatre Arts and a minor in Psychology who wants to pursue stage management and properties design. “I’ve thoroughly enjoyed working on props, especially having the opportunity to work with two different properties designers,” Clanton said. “I am most looking forward to assistant stage managing God of Carnage with Alden Vasquez, who has been a professional stage manager on Broadway and elsewhere. It’ll be nice having a bigger involvement in the rehearsal process.”

• Mitch Weindorf of Campbellsport, Wis., attends Carthage College in Kenosha, Wis. Weindorf will be a junior in the fall working towards a BA in theatre performance. “It’s been great acting in A Few Good Men as an MP and having the opportunity to hold Lee E. Ernst back when his character, Jessep, explodes in court,” Weindorf said. “I’ll get to bring this experience back with me to school and share what I’ve learned.”

• Kelly Pursley of Shoreview, Minn., attends UW – Milwaukee where she is pursing a BFA in Technical Production. “Being a part of the run crew for Making God Laugh was fun, but I love working in the scene shop,” Pursley said. “I get the chance to build [things] one wouldn’t necessary get to build in ‘the real world.’” 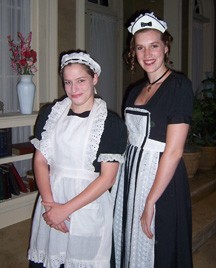 Interns Carole Alt and Katherine Clanton hang out backstage during the run of The “Importance of Being Earnest.” Photo by Audra Baakari Boyle.

• Jason Szmanda of East Troy, Wis., graduated from UW – Green Bay in 2010 with majors in theatre, psychology and human development. “Assistant stage managing and acting in A Few Good Men has given me the opportunity to be immersed in the process and to watch it grow and develop from start to finish,” Szmanda said.

• Danielle Kapolnek, of Park Ridge, Ill., is an administrative intern who recently graduated from St. Norbert College with a BA in theatre and business administration. “It’s amazing to be a part of a company in which all members live, eat, play, and work together,” Kapolnek said. “I also get the best of both worlds operating and managing the canteen, exercising my business half, and assisting in strike and changeover, getting my hands dirty and knowing I helped with something bigger than myself.”

The Players interns of 2011 have christened themselves “Boathouse Productions” in the confidence that, if they so pleased, they could establish, run, and produce theatrical productions of their own using the talents and skills of each individual. These interns experienced a summer they will never forget, learning valuable skills they will take forth when the final curtain closes on the Players season mid-October.

For information about the Peninsula Players internship program contact Audra Baakari Boyle or visit http://www.peninsulaplayers.com for a description or application.