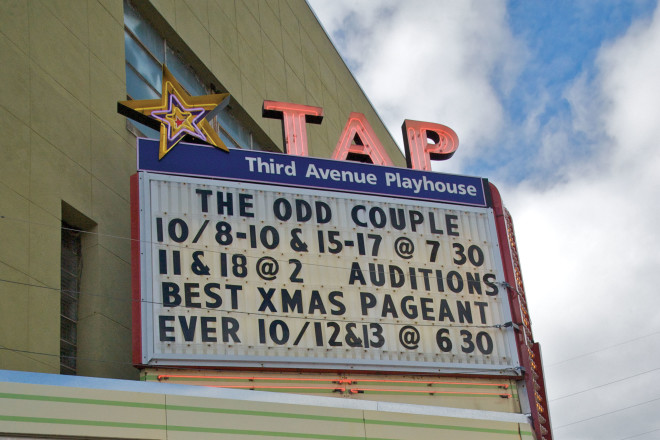 For those who may not know her, Judy Drew is the Executive Director of the Third Avenue Playhouse (TAP) in Sturgeon Bay. She came to the position in August of 2004 after working many years dealing with insurance and financial services. On the surface, it was quite a shift. Here’s how she describes it.

“When I accepted the position at TAP, my private sector friends warned me constantly about the nature of non-profits – that there are never enough resources, that they consume people. Those are both true statements, but I discovered early on that people who work for non-profits believe in them – passionately. And out of that belief is born a whole culture of giving. And that culture invests everything we do with a sense of purpose and possibility.”

I should be clear from the outset that I do not approach Judy Drew from the standpoint of a journalist reporting on a subject. As a member of the Board of Directors of the Third Avenue Playhouse and as one of the stage directors who regularly mounts production for TAPWorks, the TAP in-house community theater project, I have worked with Judy for a number of years now. Such being the case, it is clear to me that those last three words of hers – “purpose and possibility” – are absolutely key to any description of her character.

Judy and her husband Doug came to the county to live in Sturgeon Bay in 2002. Like so many Chicagoans, they came as semi-retirees fleeing from the urban crush and chaos in search of the calming qualities of the Door County countryside. And, to a degree, they found just that…until Judy became involved with that little theater on Third Avenue called The Playhouse.

Her friends were right about non-profits; they are always in semi-desperate straits. But Judy was serving on the Board of Directors at a time when TAP seemed to have lost its original direction and purpose and possibilities were in short supply. As the board recognized her business acumen, she soon appeared as the logical person to step into the position of executive director. In doing so, she quickly changed the course of the situation by centering the theater’s operation on the original mission as set forth by its founders. That mission, in part, was to provide “a year round community arts center that is a permanent home for educational and community theater [that would] inspire…cultural awareness through workshops, classes, and performance opportunities…” Since then, Third Avenue Playhouse has experienced a slow but steady growth toward a more purposeful and promising future.

The qualities necessary to fulfill a life vision of purpose and possibilities are developed from early childhood and from what Judy tells of her parents and upbringing, this was so with her. But a quick overview of her résumé leaves no doubt about how her “first” career developed these qualities further. That résumé reveals a steady progression from office manager to assistant vice president to senior vice president from 1975 to 1998. During all this time she honed skills in analysis, marketing, and business planning, all of which would flower and bear fruit once she stepped into the directorship of the playhouse.

Of that new beginning she says, “TAP was my first position with a non-profit organization and it was – to say the least – enlightening. Small staff, smaller budget, big mission. Little theater, I thought. Big heart.”

Like all good students, she goes on to pay homage to her mentor. “During my first career, I worked with a gentleman named Walter Kirson who was the chief financial officer of my company. He was a very bright, very wise, very decent man who believed that any job worth doing was worth doing well and with integrity. I carry his lessons with me to this day.”

All enterprises demand cooperation, but non-profit enterprises often demand even deeper commitments in the form of actual collaborations. Theater is, in and of itself, a collaborative art form where purpose and possibilities conjoin to create moving drama and rollicking comedy. While at TAP, Judy has extended that process into the community.

“My responsibilities at Third Avenue Playhouse often leave little time for pursuing other interests,” she says, “but I’ve been fortunate to be able to connect with many other community organizations through the theater. Over the years, we’ve hosted events for the Boys and Girls Club, the Family Centers of Door County, the Door County YMCA, the Wellness Center, the Door County Maritime Museum, as well as area schools. One of our most successful collaborations has been with Sunshine House. In 2008, TAP received the Employer of the Year award from Sunshine House in recognition of the work opportunities we provide to their clients. Those work opportunities include weekly cleaning of the theater and the mail preparation of our newsletter and other mass mailings throughout the year.”

Judy continues by saying, “Certainly one of the most gratifying and enjoyable collaborations has been hosting the Sunshine House Players every year for the past three years. I worked with Bill and Renee Bauernfeind (who volunteer both at TAP and at Sunshine House) and with former Development Director Nancy Vaughn to present their first play. The production has become an annual event.

Lest one begin to think of Judy Drew as all work and little play, I need only add one or two more details. Above and beyond the duties of her position at Third Avenue Playhouse, she is an avid theater goer. Her eye for good performers had made TAP a destination for people looking for first-rate local and regional musical and theatrical performances. On a more personal level, as an undergraduate English major, she has taken advantage of the ongoing writer’s workshops at TAP where she continues her interest in writing both fiction and poetry. It is rumored that she is an accomplished pianist as well, but this talent is shared only with her husband and their dog, Will. That being the case, we’ll let Judy the poetess share a more personal take on living a life of “purpose and possibilities.” 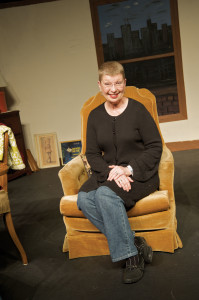 And fill once barren rooms with fragrance sweet

As Winter comes and sparrows take their flight,

My spirits lift and soar; my heart’s replete.

A pleasure now I take in simple things

From which all outward beauty long has fled.

My eyes see Life anew; my thoughts have wings!

Why do I feel such Joy in Sorrow’s stead?

Because of you I feel this wondrous way.

Your Love has opened once locked doors to me,

And lends bright Hope and Promise to each day.

I shall possess my Spring eternally;

For Love, my love, reveals a truer guise

Unveiling that oft’ hidden from our eyes.