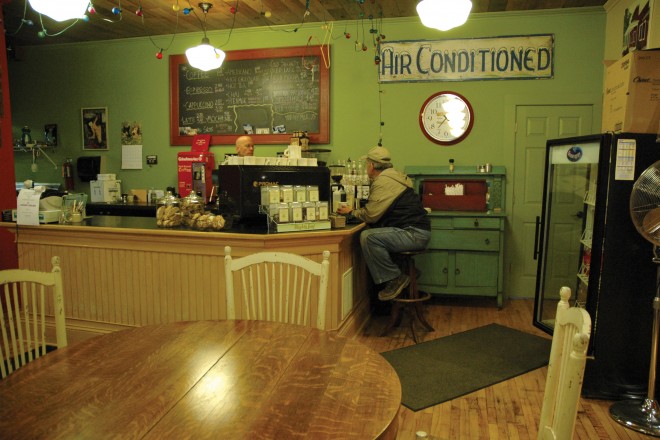 From an outsider’s perspective, living on Washington Island is a difficult thing to fully appreciate – especially if you’re one of those city-born people, accustomed to all the luxuries of an urban setting, who thinks that to move there would constitute drastic, even crazy, behavior. I traveled there this past February, however, to meet with Red Cup coffee shop owners Mike and Ann Remke and learned a quick lesson:  that the Remkes, a couple who uprooted their family from Chicago ten years ago to try their hand at island life, are not crazy or drastic in the slightest.

True, the island is quite literally in the middle of nowhere. True also, the island can scarcely be thought of as a place to make a quick buck. It not only deprives its citizens of many material conveniences, but it also requires the kind of devotion that would challenge even the most hardened of rural dwellers. My visit put to rest, however, the judgmental suspicion I held. In the Remkes’ case, the opposite claim appears to be true:  this couple has their priorities straight.

For context, Washington Island is a 22-square mile landmass of 650 or so fulltime residents. It’s located about six miles across the Death’s Door channel, so-named for the treacherousness of its waters, northeast of Gills Rock. It’s reachable only by plane or boat, and for most is accessed via the Washington Island Ferry Line, a fleet of six engine-roaring, ice-wind-and-wave-breaking vessels that, in all my years and dozen or more voyages, has never given me what I’d call a “smooth ride.” Getting to and from the island is typically a daylong venture (although the ride itself is only 30 minutes long) and, for folks like the Remkes, I would imagine that those six miles across the channel and to the rest of civilization beyond must sometimes feel like an awfully long way away.

So what possessed this ordinary couple from the ‘burbs to drop city life altogether and relocate to such an unlikely spot? Short answer: a better life. There’s an aura on the island that faintly resembles a Norman Rockwell painting unfrozen in time. It’s the kind of place where Americana lives, unspoiled by the breakneck speeds of the 21st Century, where baseball, ice cream and apple pie reign supreme. Most things, from the handful of shops and taverns down to the half-mended fences along the road, look weathered by time and perhaps a little dusty, though not unloved.

Against such a backdrop, the Remkes decision to put their Illinois home on the market makes sense. Mike and Ann used to drive 70 miles one way to work each day, a fact which stresses the contrast between the old life and the new in Ann’s mind. “It’s five miles to get home from the shop,” she says, “and if I forget something I’ll catch myself thinking ‘I have to go all the way back!’” A similar sentiment applies to Mike and Ann’s thoughts on raising two daughters, ages 13 and 16, on the island. “I was a paranoid parent before moving here,” says Ann referring to their previous lives in Hebron. “Once we did, that all went away.”

Opening the Red Cup, subtitled “Killer Coffee,” came as an afterthought for the Remkes, having had no background in the specialty coffee business. Eight years ago, they bought a building on the corner of Detroit Harbor Road and Main Road, a couple of miles away from the ferry dock and just a short bike ride from “downtown” Washington Island. The Remkes set to work on an extensive renovation of what had once been the Clover Farms Grocery Store, creating the retro-chic, yet unpretentious, meeting place that now attracts a cross-section of the island’s residents and tourists.

On a normal day, Mike arrives around 6:30 to open the shop and tend counter for an hour or two before heading off to his regular job painting houses. What should be a lonely, desolate time of day, however, is not so. In fact, as Mike says, “Two customers have a front door key, and if I’m not here right on time, one of them will probably have opened up the shop.” One day this past winter, he says, “By the time I arrived John had shoveled the snow out front, turned the heat and lights on, and made a fire” – an anecdote that bespeaks a level of neighborliness not commonly found on the mainland. Ann, meanwhile, arrives at the shop around 8:00 to settle in for the rest of the day, and I don’t get the impression the daily shuffle of customer-friends is any more anonymous than the early morning regulars. Says Ann, “This seems to be a place where people like to hang out and have meetings; it’s nice to have this atmosphere for them.”

The experience of being at the Red Cup, too, could be the envy of any suburbanite accustomed to the turn-and-burn chain coffee shops of the city. Of course the Red Cup has all the usual stuff of an inviting, well-run coffee house – a large fireplace, comfortable couches, a cozy side-room, organic and fair trade coffee, things to eat, lively décor of red, mustard yellow and parakeet green, and an atmosphere made for reading the Saturday paper – but there’s something about the shop that conveys a deeper than usual connection with its surroundings. It’s not a lone entity with nameless strangers passing through and leaving behind only the evidence of consumption, but rather the Red Cup is part of the island’s living organism of small-town informality.

Sensing this, I ask Mike and Ann about the ubiquitous “wave” on the island. I recalled from one of my earlier visits that the driver of a passing car had waved at me, and thinking “Do I know that guy?” When the second car passed and the driver also waved, I wondered more incredulously, “Do I know that guy, too?!” It doesn’t take long to realize that everyone waves, simply because it’s a nice thing to do – it’s a social moray unique to a place like Washington Island, where a deeper trust is extended to even strangers.

My inquiry drew a light chuckle from Mike. “Not everyone gets along on the island,” he said, “but they always wave. I’ve been trying to figure out the rule, though. If I see someone by the gas station and wave, should I also wave if I pass them by the grocery store a few minutes later?” The debate on the statute of limitations for the “wave” is one that may not be resolved any time soon, but the point remains that Washington Island is a very friendly place.

Mike adds, “If you call the wrong number it can take you 20 minutes to get off the phone because chances are you know the person. Even stopping for a quick item at the grocery store can take 20 minutes for the same reason.” In the same vein, Ann comments, “One story goes that 20 years ago only one person voted Democrat in an election and everyone on the island knew who the person was! That’s changed now, of course.”

Such anecdotes, along with Mike and Ann’s relaxed demeanors, paint a fuller picture of “the better life” one gains by moving away from the hustle of the city, and from the expressways and malls that come with it. Hard work and comparative isolation, to be sure, are attached to that better life; it’s just that the trade-offs are better. For the Remkes, the atmosphere of trust and familiarity on the island carries across the threshold of the Red Cup’s front door – we mainlanders may only catch a glimpse, but after a necessary moment of pause, it’s clear the extra effort is more than justified.