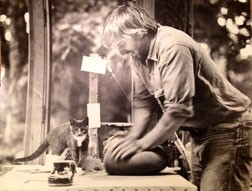 Time has a way of shaping a person, much like clay in a potter’s hands. And as trends change, often the potter and his work will change. So it goes with potter John Dietrich, owner of Ellison Bay Pottery, who has been working with clay, glazes and paints for close to a half a century.

His parents, Tom and Margaret Dietrich, were painters and his father used to teach at The Clearing during summers allowing young John to spend memorable weeks in the open spaces of Ellison Bay picking cherries and playing with Lee Telfer. He smiles as he tells me that 10 days before graduating from Lawrence University back in the 1960s he finally took a pottery class “mostly for an easy credit,” but, he adds, “I fell in love with throwing – the process of throwing.”

Unannounced in 1968 he contacted Abe Cohn at the Potters Wheel about being his assistant.

“Six years later, in the summer of 1974,” Dietrich continues with a reflective gaze, “during the last year of my apprenticeship with Abe, he tells me, it’s about time, meaning – time to get my own studio.”

Determined to follow his mentor’s advice he went to get a plat book at the bank in Sister Bay where he struck up a conversation with teller Ruth Telfer about her grandfather’s barn and 10 acres of property on Garrett Bay Road, a place that conjured up fond memories of his childhood.

“Finding out the barn and property was available for sale I did what any rational person would do – I went to Wilson’s for a cherry Coke,” Dietrich recalls with a smile. Thus began Dietrich’s pottery career in Ellison Bay.

“Unbeknownst to me I was much like a painter, applying colors while the pot is still wet showing emotion and life. I layer color and texture. I wanted to express confidence, wanted to reflect shapes – in human and animals – the energy that naturally exists.” 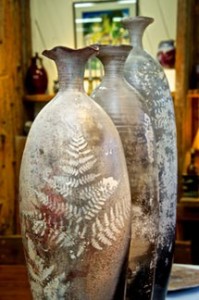 After 20 years of focused pottery work he met his wife, Diane McNeil in 1994, while singing with the Peninsula Chamber Singers; he was a tenor and McNeil an alto. McNeil was a dairy farmer in Baileys Harbor, divorced with four children. Dietrich had never been married.

“Those were challenging days,” McNeil recalls. “It was a difficult adjustment for the children.” Yet, clearly, their art has been a bond. McNeil previously was a bead artist and writer, now she is a clay artist in her own right. Together they work not only on creating but educating customers.

“In today’s generation,” McNeil interjects, “there’s less emphasis on working with one’s hands. More often than not people do not understand the process of art, the amount of steps and work that goes into each one-of-a-kind piece. They think if they buy six mugs they can bargain – there’s no understanding that the same amount of time goes into making each mug.”

The heyday of artists in Door County goes back to the 1980s – and today’s customers tend to purchase smaller pieces such as bowls, cups, mugs, vases and candleholders. 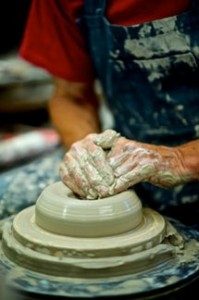 Most interesting is the thought that Dietrich and McNeil put into their creations. Take for example, the mug. Dietrich tells me customers want a mug with a handle that feels good – that is ergonomically correct. “Look at the shape of your thumb – the design element of it – the handle of a mug should mimic this design.” He holds up his thumb showing off its shapes and tells me that he is always thinking thoughts – exploring new shapes and ideas. “We want our work to function.”

Diane McNeil’s pottery pieces are a result of hand-building rather than throwing, and they have a whimsical quality to them – like the curved birdhouse infused with movement.

Together they continue to build upon the legacy Dietrich began 40 years ago when he began giving back to the community. Dietrich, while a member of the Men’s Club in Ellison Bay helped raise money to build the gazebo, the ballpark and the skating rink. He was director and exhibitor for Olde Ellison Bay Days Art Fair from 1980 to 1995.

To celebrate Dietrich’s ongoing legacy in Ellison Bay, McNeil is planning a 40th celebration of his clay art and business on Aug. 24. There will be coffee and Oo LaLa’s (lingonberries, dark chocolate, brie and cream cheese in puff pastry) from Brew Coffeehouse, cider from Island Orchard Cider, music from Nick Hoover and Jess Holland from 4 – 7 pm, and a photo booth for people to take selfies while holding pieces of pottery. 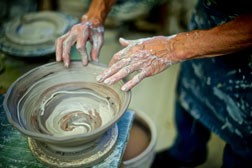 McNeil also asks that long-time customers send photos of their John Dietrich collection to [email protected] so those can be shared at the celebration.

As a final note McNeil says, “Everyone and their mother is invited, even if it’s only to listen to Nick and Jess!”