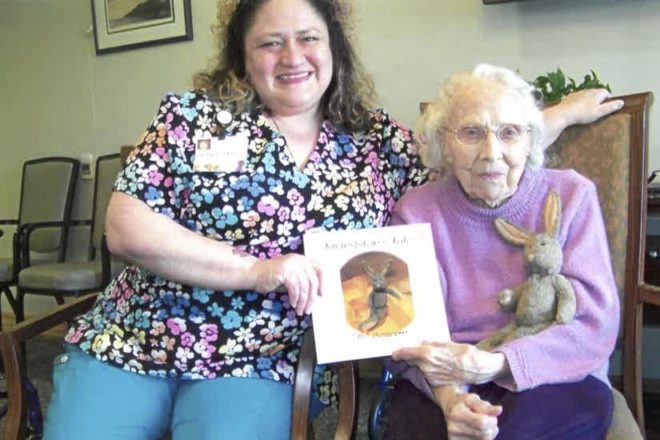 About a quarter-century ago, Carollyn Lopez’s grandmother, Lois Hastings; and her mother, Margaret Culberson, were in a gift shop where Margaret saw a stuffed brown bunny that she liked, and Lois bought it for her. They couldn’t have imagined the life that bunny would have.

Fast forward a few years, when the bunny – by then named Livingston – was the favorite plaything of Carollyn’s young son, Kel Kelley, when he visited Grandma Culberson’s house, and she eventually gave it to him.  “Kel had a crazy imagination,” Carollyn said. “He and Livingston had all kinds of adventures. For a while, they were pirates on the high seas. Then Kel turned an empty refrigerator box into a spaceship, and he and Livingston traveled to the moon with sandwiches for their lunch. He even made a spacesuit for the bunny.”

Kel made up vivid, detailed stories about all their adventures and told them over and over to his mom and younger brother, Keenan, who joined in the hijinks when he was a little older. Carollyn always created stories to tell her sons at bedtime, and 20 years ago, when she was on bed rest before the birth of her daughter, Markie, her stories kept the little boys occupied for most of the day.

For years, Carollyn’s children have encouraged her to turn all those long-ago stories into a book, and in February she published Livingston’s Tales: The Beginning – the first of what will become a series. The second book, Bunny on the Moon, is already under way, and Bunny at Sea will follow. But first, the author wanted to introduce young readers to Livingston, Kel and Keenan.

The story is set in the house where Carollyn and her brother, Tony, grew up in Oakwood Hills, Illinois, a village in McHenry County. “It was a wonderful time to be a child,” Carollyn recalled. “We’d finish our chores as fast as we could every morning in the summer, jump on our bikes and be gone with our friends until the streetlights came on. If we got hungry, we’d decide whose fridge to raid.

“The adventures Livingston and the two little boys have in the book are real – they’re things my brother and I experienced. For example, we had a special place to play that we called Stone City – an abandoned farm where only the basement of the old farmhouse, a chicken coop and a silo had survived a fire.”

Although she’s been a lifelong writer, Carollyn has had many other careers: as a waiter and restaurant manager, appliance salesperson, department head and human-resources manager for Sears, tour agency staffer and teacher. She taught 4K in Florida and kindergarten at SS Peter and Paul in Sevastopol.

Now she’s a med tech at Scandia Village, and that’s where she found the illustrator for Livingston’s Tales.

Florence Thoms, age 102, is a talented watercolorist who, like Grandma Moses, didn’t start painting until later in life. Thoms took up a brush when she moved to Scand more than 20 years ago. When Carollyn asked whether she’d be interested in illustrating the book, Florence demurred, saying that wasn’t the kind of art she did. She wanted to read the manuscript, though, and when she returned it a few days later, it was accompanied by two completed drawings.

Florence is very excited to see the project completed. The idea for Bunny at Sea, the third book, came from a painting she did of a little boy and his bunny sitting on the beach.

Carollyn is excited for the first royalty check to arrive so she can frame it. Her sons are excited, too. Kel, now 30, recently returned Livingston – “now that he’s famous!” – to his mom for safe keeping. Daughter Markie isn’t a character in this book because she wasn’t born at the time when it’s set. “In a future book, Momma may have a baby girl,” Carollyn said with a chuckle.

The limited first edition sold out, but it’s available from the publisher and from authorhouse.com, amazon.com and barnesandnoble.com, and Lopez hopes to place it in local shops.