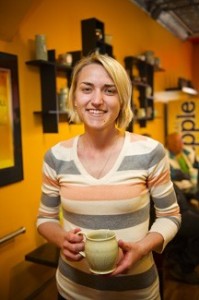 “I just really love ceramics,” smiles 24-year-old barista, track coach, and potter Liz Butler sitting against a yellow wall, beneath a shelf of her mugs, candleholders, and vases at Kick Coffee in Sturgeon Bay.

A graduate of Southern Door High School, Butler double-majored in history and anthropology at Loyola University in Chicago, where she “fell in to ceramics,” explains Butler, who was recruited by the university to play track. “In high school I used to want to be a professional athlete one day, crazy dreams,” says Butler, who took a ceramics class late in her sophomore year. “I was always interested in ceramics, so I took a hand-building class there and was like, ‘Wow, I really like this!’” She then decided to minor in ceramics. “I just fell in love with it,” she says again. “I had some really good professors who pushed me to pursue it.”

As part of her history and anthropology major, Butler partook in an archaeological dig in Portugal. “It just happened to be in the ‘pottery town’ of Portugal. I met a really amazing potter there and did some work with him,” recalls Butler, adding, “It all fits together. That’s what I love about ceramics – I love the history, I love the cultural aspects of it. I might not be a historian, but I still kind of apply it to my ceramics. I really appreciate that [pottery] is something that lasts and the idea of making something that can go on.”

When Butler returned to Door County after graduating from Loyola University, she didn’t have a place to work on her ceramics. So she gave Chad Luberger of Plum Bottom Pottery a call. 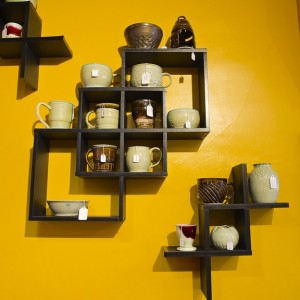 “I really appreciate that [pottery] is something that lasts,” says Liz Butler. Photo by Len Villano.

“Do you need any help? I’m really willing to just learn and help,” Butler asked Chad, who took her on as an apprentice, which turned into a paid position. “I definitely learned a lot from Chad,” says Butler. “I mix all my glazes, which is a science, it’s like chemistry, and Chad totally helped me. He taught me what’s food-safe, what is not food-safe. A mug has to feel good; Chad taught me that. The lip – it has to feel good when someone brings it to their mouth. He taught me to think more about what I’m making. My forms have to be right for what their function is.”

Butler also developed her own style while working at Plum Bottom Pottery – playing with various textures, which grace much of her work. “I have little tools,” she smiles, “whatever I find or think has a good texture.” She applies various glaze colors as well, primarily greens and blues. “They are very calming colors,” she says. “I’m just attracted to a lot of greens and blues.”

But she continues to experiment and try new techniques. “Pottery is a continuous thing. You master how to do certain things, but you’re always experimenting – I feel you should be when you’re an artist. You can’t stick with the same thing forever. You’re always creating new things. You get an idea and you go for it.”

After months of driving to and from Plum Bottom Pottery to work on her pottery, Butler decided to buy her own wheel and kiln. “I just took that leap,” she says. “When I got my own stuff set up I was like, ‘Whoo!’” 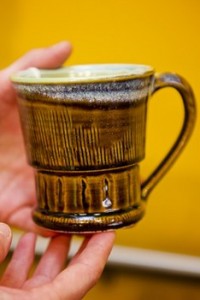 Mugs are one of Liz Butler’s favorite pieces to create. Photo by Len Villano.

She pulled her work from Plum Bottom Pottery and began working in her own studio, though she still calls on Luberger for help from time to time.

“I had a disaster happen with my kiln. Some of my glazes ran off and ruined a lot of my shelves,” explains Butler. “I called Chad and was like, ‘What do I do?’ And he was like, ‘Liz, you’re okay. This stuff happens. It will happen again, believe me.’”

The permanent display of her work now featured at Kick Coffee came about when the owner, Al Duessler, offered Butler a job as a barista and one day asked her, ‘Why don’t you show your work here?’

“And I was like, ‘Really? You’d let me do that?’” recalls Butler. “He put up the shelves, painted the walls. He set it up nice for me. It’s a super good opportunity.”