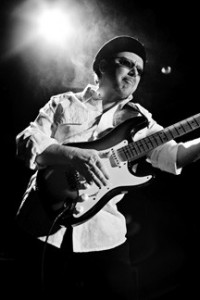 Lloyd Jones and his band will take the stage at the Peg Egan Performing Art Center’s Sunset Concert Series August 18 at 7 pm.

Jones is a master of the soulful understatement, the raw growl, and the groove. From his roots in muddy Oregon soil, he’s forged a 30-plus-year career as an impassioned singer and fierce guitar slinger, a clever and soulful songwriter, a bandleader, record producer, and an almost strident torchbearer for all that’s true and good about America’s music. Jones is his own true artist who works diligently at pushing American roots music forward.

What he does, he says, is “combine New Orleans rhythms, the simplicity of Memphis music, and the rawness of the blues, all for the 21st century. This music is not about louder and faster. It’s about time, meter, groove. I thought Muddy and Walter and those guys were pushing the envelope in their era. They were using effects, they were inventing their own sound. They were modern. I want to look at it in a contemporary way.”

Jones is a gifted singer, songwriter, American storyteller and energetic showman. He writes timeless music, steeped in a rich musical history that he’s learned, lived and loved over the years. “This is not a work of science,” he says. “It’s about attitude and joy that applies to all age groups. I’m addicted to this music.”

The Peg Egan Center is an outdoor amphitheater located on Church Street in Egg Harbor. All concerts are free and open to the public. In case of rain, concerts are held at the Calvary Methodist Church, located at 4650 County Rd E in Egg Harbor. For more information call 920.493.5979.