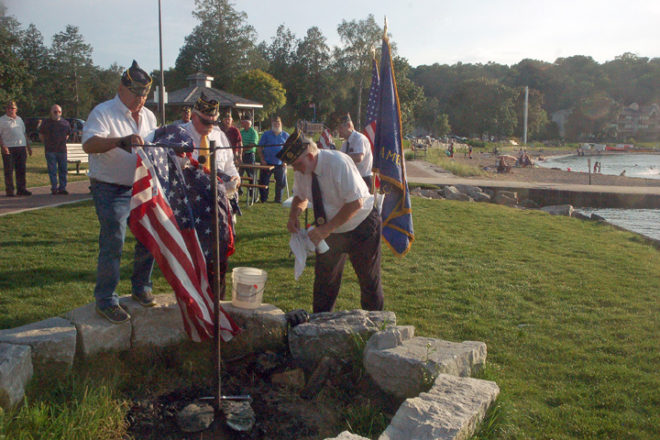 At its Aug. 1 meeting in Sister Bay, members of the Billy Weiss American Legion Post 527 held a flag disposal ceremony on the Sister Bay waterfront, while passers-by stopped to watch the ceremonial burning of American flags.

The flags are collected by members from three collection sites – former U.S. Postal Service boxes at the library in Baileys Harbor, at the Sister Bay Fire Station and Nicolet Bank in Ellison Bay.

“It’s amazing how many flags we collect,” said Tom Kowalski, who serves as the post’s Sergeant-at-Arms.

The post collects enough flags to hold two disposal ceremonies a year, one in the summer and one in winter.

The ceremony involved a call and response between Kowalski and Commander Bill Becker.

Kowalski was asked if the present condition of the flags is the result of usual service as the emblem of our country, to which Kowalski replied, “These flags have become faded and worn over graves of our departed comrades and the soldier, Marine, sailor and airman dead of all our nation’s wars.”

Then he was asked if the flags have served any other purpose, to which he replied, “Some of these flags have been displayed in various public places.”

Later in the ceremony, the commander delivers a soliloquy: “A Flag may be a flimsy bit of printed gauze, or a beautiful banner of finest silk. Its intrinsic value may be trifling or great; but its real value is beyond price, for it is a precious symbol of all that we and our comrades have worked for and lived for, and died for a free Nation of free men, true to the faith of the past, devoted to the ideals and practice of Justice, Freedom and Democracy.

“Let these faded Flags of our Country be retired and destroyed with respectful and honorable rites and their places be taken by bright new Flags of the same size and kind, and let no grave of our soldier or sailor dead be unhonored and unmarked. Sergeant-at-Arms, assemble the Color Guard, escort the detail bearing the Flags and destroy these Flags by burning. The members shall stand at attention.”