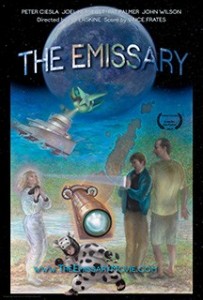 “The imagery in my design gives the observer an invitation to find out about the story. I had time to develop idea sketches during the movie production, and moving along with the project itself gave me great inspiration for something completely new and different,” Rojas said. “I also did some studying on movie posters. What makes a good one, and famously bad ones, too.”

Rojas points out the inspiration the film offered to his poster creation: history, romance, humor, science fiction plus scientific and educational trivia.

“That’s what probably inspired my first vision of a graduated, otherworldly color scheme — beginning at the bottom, changing from light to dark. Observe how the foreground where the three characters stand has self-luminosity, indicating supernatural influences in an otherwise normal Midwestern lake community,” Rojas said. “I am a Sci-fi fan, so the originality of intertwining elements of our known reality here with aliens and the phenomenal energy generator struck me as brilliant and hilarious. And speaking of hilarious, the cowman in my composition added the perfect out-of-the-picture element, jumping out of the poster. Needless to say, during the creation I had one of the best times. And my students also got to see the progress during classes as I used the poster’s rendition to point aspects of composition, color theory and the psychology behind art that tells a story.”