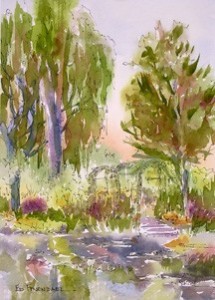 “Afternoon in the Gardens” by Ed Fenendael.

It was a thrill for Ed Fenendael, a well-known Door County watercolorist, to arrive in Giverny, France, the home of Claude Monet, and be greeted by locals as he walked the village streets. “Everyone is so welcoming to visiting artists, and that’s part of what makes the place so special,” Fenendael says.

Over several years, he’s become close friends with a number of Giverny residents, including Christian Avril, an artist who paints every day on Rue Claude Monet; his wife, Fanfan; Michel Mallay, a retired general from the French Army; and his wife, Luce, also a painter. He looks forward to special time with them on each return trip.

Fenendael’s most recent visit – his seventh to Giverny – was the result of an invitation to be a guest artist with a group of eight other people from three countries, who painted for a week in mid-September in Monet’s garden and nearby sites familiar to the founder of French Impressionism.

The trip was arranged by Caroline Nuckolls from Georgia. Like Fenendael, she has a long association with Giverny, dating back nearly twenty years to ArtStudy Giverny, a school for artists and photographers founded by Gale Bennett, a native of Florida. Since his death in 2008, Nuckolls has kept Bennett’s spirit alive through a new organization, Art Colony Giverny. Participants in Bennett’s sessions stayed in an old lodge. Today, they make themselves at home in an old mill, Moulin des Chennevieres, located within walking distance of everything in Monet’s little village on the River Seine, about an hour northwest of Paris. 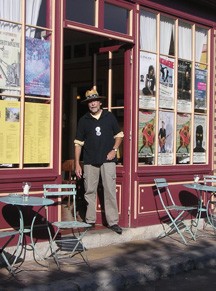 Fenendael visits the Hotel Baudy on Rue Claude Monet in Giverny, where Monet took many meals.

From 7:30 to 9 am each weekday morning and from 5:30 to 8 pm in the evening, Fenendael and others in the group painted in Monet’s famous garden. “We were alone at those times,” he says, “and the light was wonderful.” Paintings he worked on there feature the water lilies for which Monet is so well known, the flower-covered arch over the walkway to his home, the pink house itself, masses of flowers throughout the garden and scenes along the nearby Seine. “It was such a wonderful experience,” Fenendael says, “to be an American, invited to Giverny. It was such an inspirational time, almost like a dream.”

When not painting in the garden, Fenendael was free to wander, alone or with others, in Giverny or nearby villages. “Another very special place,” he says, “is the Hotel Baudy on Rue Claude Monet in Giverny, where Monet took many meals. In the back of the hotel, preserved as a memorial, is a studio used by Monet, Renoir, the American artist Mary Cassatt and other Impressionists. “Words can’t express how I felt standing there in awe, imagining what had been accomplished in that little room.”

Fenendael spent a day in Les Andelys, a village along the Seine, noted for its chalk cliffs and the ruins of Chateau Gaillard, the castle completed for Richard the Lionheart in 1198. Monet often painted there, as well as in Vétheuil, where he lived before moving to Giverny. From Lavacourt, on the opposite side of the Seine, Fenendael painted the Church of Vétheuil, made famous by the dozens of renditions by Monet from the same vantage point.

Fenendael also spent a Saturday at the wonderful market in the small city of Vernon that sells everything from household goods to produce, fish and meat. “It was a delight to spend several hours there,” he says, “just sitting, having coffee, journaling and watching the world go by.” 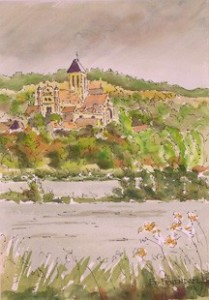 “The Church of Vetheuil” by Ed Fenendael.

A unique experience for Fenendael was the afternoon-long lesson he provided for John Pollock from Indiana, an amateur painter currently working for the U.S. State Department in a small village in Afghanistan. The lesson was arranged as a surprise for Pollock by his friend, Dr. Christine Bishop, a medical epidemiologist from Australia, “planted” in Kabul, Afghanistan, by Management Sciences for Health (MSH). The two joined Fenendael’s list of special friends, and shared his group’s traditional “last night” champagne dinner. He has been invited to visit them on a painting expedition to Afghanistan.

Another highlight of the week was the renewal of Fenendael’s contract to exhibit his paintings for sale in the Atelier Galerie Letoliacha in Giverny, a high honor for an American.

In October, Fenendael will take a group of his watercolor students to paint in Tuscany and Umbria, Italy. He’s been there often before, and Italy is special to him, but his heart is in Giverny. “My gratitude to the local people for the acceptance and friendship I’ve experienced in that part of the world is beyond words,” he says. “I hope to return soon and often.”

Fenendael’s work can be seen at his Morning Mist Studio at Windmill Farm, 1 mile west of County A at 3829 Fairview Road near Baileys Harbor. The gallery is open Friday, Saturday and Sunday, 10 am – 5 pm through Oct. 20 or by appointment. For more information call 920.868.9282.