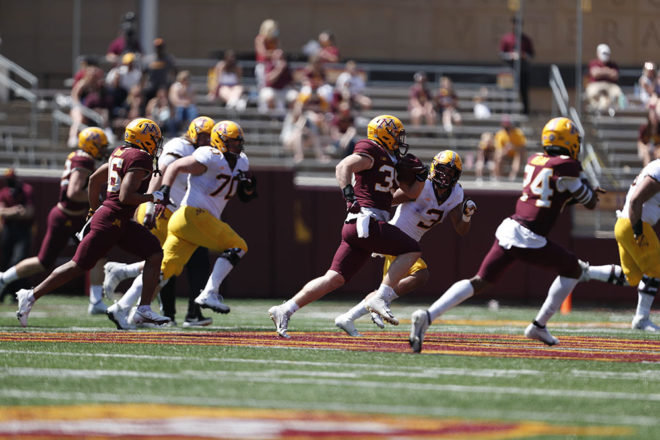 Southern Door alumnus Derik LeCaptain finished his spring football camp at the University of Minnesota in Minneapolis with a strong performance in the Maroon/Gold game May 1.

LeCaptain, a redshirt sophomore linebacker, recorded an interception for Maroon that won the game 24-17, and he was named Side Hartman Spring Game MVP along with teammates Jah Joyner, Terell Smith and Chris Autman-Bell.

“It definitely gives me a lot of confidence [heading into the fall],” LeCaptain said.

In 2020, he saw most of his playing time on special teams and recorded a tackle against Purdue. LeCaptain was named Special Teams Scout Player of the Year during his redshirt season in 2019 and was named to the Big Ten All-Academic Team in 2020.

LeCaptain isn’t certain where he sits on the linebacker depth chart, but he said he’s improving by working with a great group of fellow linebackers.

“We are all just working right now to be the best linebacker unit that we can be,” LeCaptain said.

“I knew that everyone at that level was going to be just as good, if not better than me,” Claflin said. “[I also knew] that there was going to be a drastic difference in the speed and strength of the game.”

Claflin averaged 2.4 points and 1.7 rebounds for the 8-17 Phoenix. The 6-foot-6 forward appeared in 22 games, started in 11 and had a season-high 10 points against Eastern Illinois University.

“My goal moving forward into the off-season is to become more consistent,” said Claflin, who is a finance major. “Everyone at the college level is good, but the players and teams that succeed are the ones that are consistent.”

“I was drawn to UW-L by the great location and nature surrounding the campus, as well as the wrestling program,” Englebert said. “Academically, I really liked the variety of majors and areas of study offered by UW-L, especially because I’m not sure what I would like to major in.”

Shimon will participate in the shot put, discus and hammer throw for the Tommies, who will be in the initial year of a transition to Division I athletics.

Sturgeon Bay’s Jack Schmelzer will continue his football career as a wide receiver at the University of Wisconsin-Stout.

UW-Stout’s 2020 season was canceled due the pandemic, but it finished 4-6 in the 2019 season. Southern Door alumnus Clayt Birmingham coaches the Blue Devils.

“The coaching staff was really down to earth, and we got along well,” said Schmelzer, who will major in real estate property management.