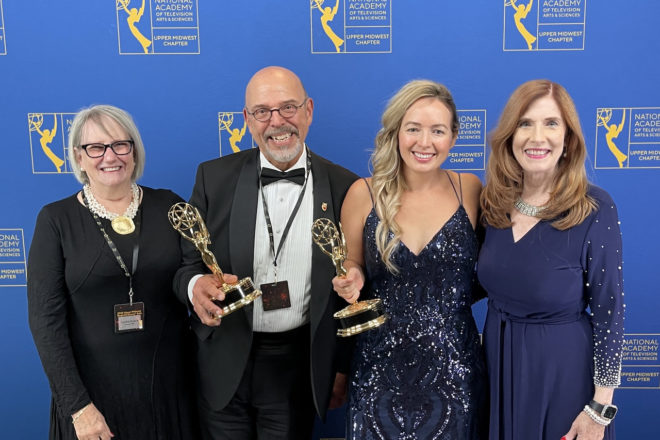 As of Oct. 25, local author Joseph Tachovsky was on a road trip to visit the graves of some of the men with whom his father, Frank Tachovsky, served with during WWII – a platoon known as the 40 Thieves.

But just a few weeks prior, Tachovsky was in Minnesota accepting a 2022 Upper Midwest Emmy for a video special based on his research-turned-book, 40 Thieves on Saipan: The Elite Marine Scout-Snipers in One of World War II’s Bloodiest Battles.

Pioneer PBS Postcards executive producer Dana Conroy and her team created the video special, titled Elite Marine Scout-Snipers of WWII: 40 Thieves on Saipan. The nearly 20-minute video includes interviews with Tachovsky and his book co-author, Cynthia Kraack, as well as graphics and animations to discuss the Battle of Saipan, which has been referred to as “Pacific D-Day.” It earned the Emmy in the Historical/Cultural/Nostalgic–Long Form Content category.

“It was a two-year process from the initial contact with Pioneer PBS to the awards ceremony,” Tachovsky said, referring to Goody PR Founder Liz H. Kelly’s first connection with Pioneer PBS in December 2020. He and Kraack then participated in interviews in 2021, and the episode aired in April 2022.

“​​Joe and I never expected the Regional Emmy recognition for Pioneer PBS’s segment on 40 Thieves,” Kraack said. “My prior fiction books won writing awards, but watching our book become something else in the hands of the Pioneer PBS team was a wonderful experience.”

The book, released in 2020, came about following Tachovsky’s father’s funeral, when Tachovsky found out about some of his father’s exploits during WWII – of particular note, his father taking a tank with a bazooka out of commission while his platoon was pinned down during battle, thereby saving the lives of his entire platoon.

Tachovsky’s research started there and began to grow as he discovered more and interviewed members of the platoon who were still alive.

After years of research, the first version of the book was presented as transcripts of the interviews he had conducted, but feedback from publishers sent him back to the worktable, which is where Kraack came in. The two worked together to create a narrative for the information while presenting it with accuracy and historical authenticity.

“I am continually contacted by people who see their father’s name on the cover of the book and had no idea of their service besides having been in WWII,” Tachovsky said. “Cynthia and I feel very fortunate to have been the conduit for telling the amazing stories of these noble men and grateful to Pioneer PBS for paying such a wonderful tribute to our 40.”

The video special is available for viewing on the Postcards Pioneer PBS YouTube channel.