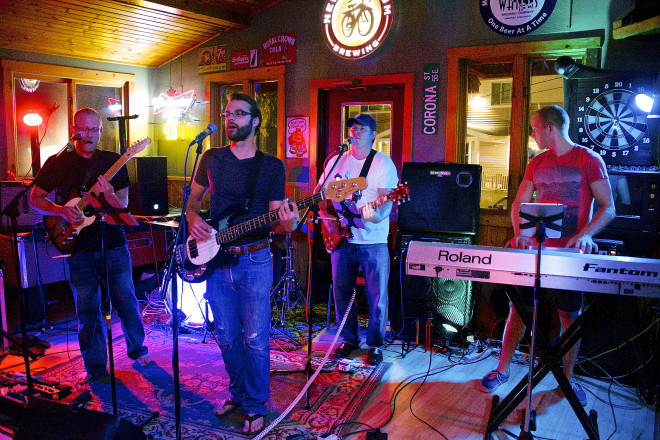 Nearly every day during the past few months, bartenders at the Bayside Tavern in Fish Creek have been picking up the phone to calls from Nashville.

“This is the pre-legal department at Broadcast Music, Inc. and it’s urgent that you contact us immediately.”

Bobby MacDonald replies, “OK, thank you,” and hangs up. MacDonald is the manager at Bayside and son of owners Elaine and “Smilin’” Bob MacDonald. He said these calls are nothing new but they have changed the way Bayside looks at live music.

Broadcast Music, Inc. (BMI) is one of three major performing rights organizations (PROs) and they provide the license to restaurants, bars, music venues and any other public space to allow for the performance of copyrighted songs. Artists and recording companies register their music with a PRO and receive a royalty check in return. The company offers a blanket license so that venues or musicians would not have to pursue the copyright to every cover song they want to play. But this license isn’t cheap, especially for a small bar that doesn’t make any money on the entertainment to begin with.

“From a business standpoint, if you calculate the fees, plus the cost of entertainment, and then the loss of revenue when they take tables for dining, that’s when it really becomes a cost issue,” said MacDonald.

In addition to the calls, letters have been coming in to the Bayside asking for compliance. Included in the letter is a calculation sheet so the bar can determine just how much a license would cost.

In the back booth at the Bayside, MacDonald raises the lights and looks over the fee calculator.

“Depending on how many nights a week you have, it goes up. It’s based on occupancy so everything becomes exponential. If people dance then you charge more for that.”

In the end, the fee would likely come to a couple thousand dollars annually, a large sum for a bar that has live music only a few times per year. This fee applies only to BMI, leaving the other two PRO companies, The American Society of Composers, Authors and Publishers (ASCAP) and the Society of European Stage Authors and Composers (SESAC), seeking their cut as well.

Each of the three PROs has a catalog of songs in their register. Unless a venue is playing only songs from one PRO catalog, they must license with all three. To make matters muddier, although a single song is not registered with two different PROs, the composer of the song may be from BMI and the publisher may be ASCAP while the performer is aligned with SESAC. You would need a license from all three PROs to play that song. “Someone Like You” by Adele and almost every song by Maroon 5 require multiple licenses. This is especially prevalent in the most commercially popular music – some of the most likely music to be covered.

A big part of the PROs business is licensing live music venues so that artists and publishers of music get paid when their work is performed. But the payment is not direct, as royalty payments are determined by commercial airplay, meaning the most commercially successful artists are the ones getting the big checks.

MacDonald’s brother, Grammy-nominated pat mAcdonald, is registered with BMI and Bobby said the royalty payments he receives are “pennies.” Under copyright law, Bobby could not bring his brother into the family owned Bayside to play songs that pat mAcdonald wrote himself without a license from BMI.

“They’re within their rights to charge us,” MacDonald admits, but he said the calls are bordering harassment. After receiving a cease and desist letter from BMI the day before Big Mouth was scheduled to play last July, Bayside canceled on the band and haven’t looked into live music since.

James Larsen, manager of Husby’s Food and Spirits in Sister Bay, tells the pre-legal department on the other end of the phone line that it is harassment, warning that he is recording the calls and telling the company to not call again.

“The scary part is that if you have an advertisement, they kind of come after you and say the band plays cover music,” said Larsen.

MacDonald said that his mother, Elaine, doesn’t want to enter into a 27-page contract and operate under fear of breaching the contract. When the companies first started calling, she even agreed to write them a check without signing the contract.

“She sent the check to them and they returned the check because without the signed contract they wouldn’t accept the payment,” said Bobby. “It’s easier for her to just not have to deal with it and say we’re not going to have bands. She doesn’t feel like the artists are really seeing the true benefit.”

Bayside and Husby’s already pay a licensing fee to the Jukebox Licensing Organization (JLO) for the use of a jukebox in the bar. The JLO is an umbrella group made up of the three PROs and they all receive a cut of the licensing fee. The additional license for live performance would just be an extension of that license based on the way in which the music was heard.

Between Monday nights with Big Mouth and a weekly open mic, Bayside has historically been a place for live music in Door County.

“The last thing I would want is for Bayside to be viewed as anti-live music because we were really viewed as strong supporters over the years and I would like to be that today,” said MacDonald. “I want to fully understand BMI and ASCAP and what the real costs are to the business and see if it’s really worth it. But looking at this, to pay over [an estimated] $3,000 a year to have bands on three or four occasions, that’s just not prudent.”