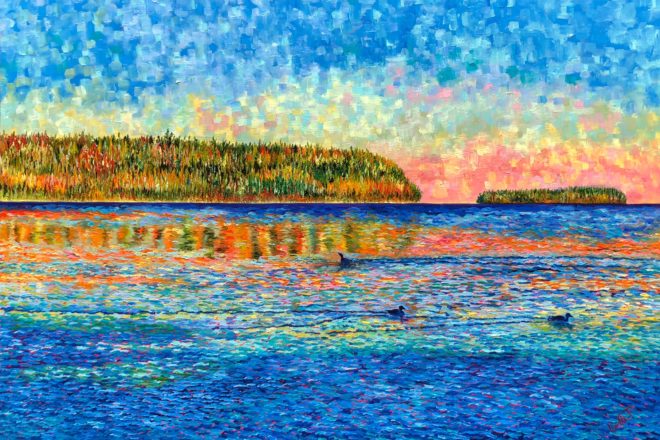 Gail Gilson Pierce still remembers an art project she made for her parents in second grade, when her teacher taught the class to finger weave, and each student could choose two colors of yarn for their project.

“The teacher was like, ‘Gail, why don’t you put some white in there to tone it down?’” Pierce said with a laugh.

She declined. She’s always been a fan of vibrant colors, and that shows decades later in her paintings. They burst with sky blues, sunshine yellows and candy pinks – and hints of those long-lived fuchsias and oranges.

At first glance, her paintings look far too bright to be representing anything from the real world. But on closer inspection, it’s clear that they’re scenes from around Door County, such as Cave Point, Whitefish Dunes and Newport State Park.

Pierce grew up in Greenleaf, a small town near Green Bay, and she now resides in Eagle River. As a kid, she and her siblings played along the Niagara Escarpment, so when her older sister, Joyce Plansky, first took her to Peninsula State Park – most of which is made up of that same escarpment – Pierce felt an immediate connection to the area.

There’s a 15-year age gap between Pierce and Plansky, so by the time Plansky was married and coming up to Door County to camp with her husband, Pierce was still a child.

“She would come up and stay with me, and then we would go out and hike and bike,” said Plansky, who now lives in Ephraim.

When they weren’t spending time outside, the sisters were visiting the many art establishments of Door County, from Fish Creek’s Interfibers Studio Gallery to Anderson House Workbench in Ephraim to Sievers School of Fiber Arts on Washington Island.

Door County’s nature and galleries both deepened Pierce’s interest in art. She started with fiber as a high schooler, long before she started painting, and she exhibited her work at Ephraim’s Fine Line Designs Gallery during the early 2000s. After years of practice, creating art quilts came so naturally to her that she stopped making them, wanting to experience a challenge again.

The challenge she chose was painting. Pierce started at age 57 by taking a watercolor class at Peninsula School of Art. Surrounded by other beginners, the atmosphere was “pretty stress free,” she said, but the higher-level classes she took at Björklunden felt a bit more nerve-racking.

Some of those nerves come back whenever she looks at a blank canvas with a paintbrush in her hand.

“Every time I start a painting, I’m scared to death,” Pierce said. “I have something in my head, and I think, ‘Am I going to be able to execute this?’”

She’s OK with that feeling, though.

“I like to be off balance a little bit,” she said.

During one of her visits to Door County as she was learning to paint, Pierce visited Plum Bottom Gallery for the first time. Loving the feel of the gallery, she told herself that she’d keep working and apply when she got better.

She submitted her first paintings to Plum Bottom in 2018, but not because she felt ready.

Where it went was the wall of Plum Bottom. The sight was as exciting for Plansky as it was for Pierce.

“She worked so hard at it, and she was so inspired,” Plansky said. “It was fun for me to see that I had some impact on her feelings for Door County and introduced her to it. I was proud of her.”

Decades after her first visits, Pierce is still drawn back to the peninsula. It has what she calls a “strong sense of place.”

“You somehow feel that you belong there – the scenery, the feel of the air, the way the light is,” she said. “You put your feet down, and you feel rooted.”