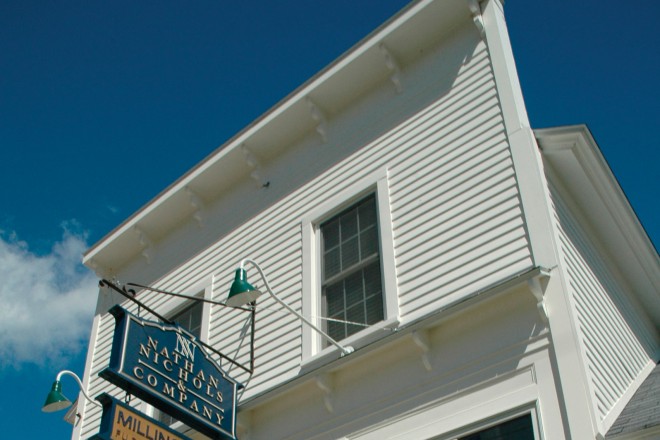 My regular daily “commute” rarely takes me to Baileys Harbor, so I drove slowly through the village, taking in the stores and restaurants, some new to me and some that have been there for as long as I can remember. As I came upon Nathan Nichols & Company’s renovated storefront, I had the feelings simultaneously of stepping back in time while discovering a brand new building. I think sometimes we forget that historic buildings were once shiny and new.

Nathan Nichols & Company, a well-known Door County furniture and accessories dealer, expanded its showroom earlier this year and, in doing so, contributed to the historic revival that appears to be happening all along main street Baileys Harbor. Owner Nathan Nichols, originally from New Hampshire, opened his Door County business in 2001 as the only exclusive, free-standing Milling Road furniture retail store in the U.S. Since the first season, word of his unique inventory and design talents has spread throughout the county and beyond. Nichols’ retail lines expanded proportionately with his volume of business and the owner/designer soon found that he had run out of space for all the furniture and accessories that he wanted to showcase.

As Nichols’ business and client-base grew, colleagues and friends urged him to move his business to a new location on the heavier-traveled bayside of the peninsula. But Nichols resisted saying he enjoys living and working on the “quiet side” and wants to attract more business to Baileys Harbor. It’s a paradox, though, Nichols feels. While he relishes the quaintness and peace of the lakeside, the nature of his business requires him to bring retail traffic into his quiet community. “Both sides of the street are lined with cars on most Saturdays,” Nichols reports, “and this is good for all the [Baileys Harbor] businesses.”

As Nichols conceptualized his expansion project, the integrity of “Main Street” Baileys Harbor was a major factor. He appreciates the history of his original building and those surrounding his store. As he walks me through the original showroom he points out details of the 19th century structure – the original wood floors and the front stoop, which previously had been obscured by a bay window built over it. This building, constructed in 1879 by Roger Eatough, had served the Baileys Harbor community as a drug store, veterinary office, bakery and barbershop. Nathan points to a faint ring on the wood floor where a barber chair once perched.

In order to actualize his expansion project, Nichols purchased the building next door to the south, which houses Mary Ann Johnson’s retail store of 36 years, Hjertehjem. This building, also constructed by Eatough in 1885, shares a similar history having served as a drug store, furniture store, mortuary and post office among other things. An addition was built on the north side of the Hjertehjem building in the 1970s, ostensibly connecting that structure to the Nathan Nichols building. The first step in the construction process was razing the 1970s addition and constructing a unifying addition between the two 19th century storefronts, restoring the original architectural style with an ?Old Towne? façade spanning the now-joined buildings.

Nathan explains that he first discovered the design for the architecture in a restaurant in Manitowoc. A picture of an old building hanging on the wall was just the style he was looking for. Fortunately, the same building was also pictured on the restaurant’s menus and the owner graciously allowed Nichols to take one home.

“Finding an architect to work on an old building was a challenge,” Nathan explains, describing the next step in the process. But he eventually found an architect from Milwaukee who was up to the task and the construction project was soon underway. As a recent home renovator myself, my eyes jumped out of my head when Nichols revealed the project’s timeline – construction began in March and the showroom was back open for business in early May. The secret was Nichols’ contractor, Rick Jacobs, who just happens to be the husband of Nichols’ design partner Jodi Jacobs. “She didn’t let him stop,” Nichols explains half-jokingly, but he is also quick to point out the fine quality and traditional building methods of his super-contractor.

The result is a bright and airy showroom, with traditional cottage flair and ample space for Nichols’ three separate furniture lines: Milling Road, Baker and Martha Stewart. The renovation also provided an office and storeroom, which the original retail space lacked, as well as parking along the south side and in the rear of the building. As a Heritage Member of the National Historic Trust Preservation, Nichols succeeded in shining up an old penny and reviving the history of his little slice of a village on the quiet side.