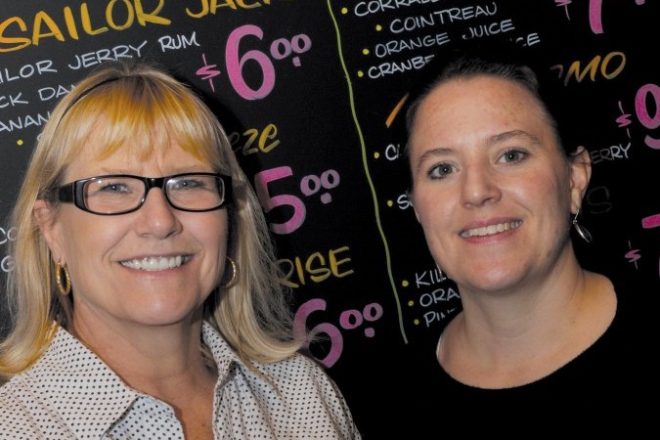 For most restaurateurs, operating one restaurant successfully proves challenging to  even the most driven and talented of owners. For Kim Jensen, running three restaurants, a bakery and a catering business seems to be the most logical thing in the world. She is genuinely puzzled when people inevitably question:  “What possesses you to do this?”

Perhaps the answer can be found in the fact that Kim has been working in restaurants since she was a high school student in Green Bay, beginning work at age 15 at Happy Joe’s pizza. It was there that Kim began to understand the business end of running a restaurant. Since Happy Joe’s is a corporately run chain, they have their food and labor costs down to a science. Kim was paying attention to that disciplined approach to running a restaurant even though she had no idea how much it would factor into her future career. When she was contemplating colleges, she selected the University of Utah so she could pursue her love of dancing and singing. “I thought I would be on Broadway singing my lungs out, not owning three restaurants. But I see that this life that I have now has always been in my blood,” she says.

When her parents, Denny and Mary Jo Delorit, moved the family to Sioux City, Iowa and bought a Dairy Queen, Kim was right there with her signature enthusiasm. She got her degree from the University of Dairy Queen and, at the time, held the highest grade to date. (Unfortunately, her record has since been broken.) She learned how to make a perfect cone as well as some additional fundamentals of running a restaurant. It was there that she met her husband, Todd, who had the reputation of being a frequent and somewhat difficult customer. He had definite ideas of how large the cones should be which conflicted with the official DQ standard. Kim was usually the one who ended up waiting on him. It turned out that it was more than the cones that kept Todd coming back. After about nine months, Kim finally agreed to go out with him and the rest is history. Within a few years, she was contacted, due to her reputation, by a franchiser who owned numerous DQ stores to run the first million-dollar store in Apple Valley, Minnesota.

After spending two years at the Apple Valley DQ, Kim was recruited by Papa John’s. It was another critical step in her learning. “I was on the team that opened new restaurants. It’s where I got a tough skin and also where I learned about the importance of looking at the numbers.” Obviously, reviewing the numbers is critical to any business; however, Kim felt that in the corporate restaurant environment, there was a little too much emphasis on the numbers. “It was always about the bottom line and not enough about the work,” she says.

It was around this time that she began to wonder how she would run her own restaurant if she had the chance. In the meantime, she began consulting for independent restaurants  that were failing. Her first challenge was turning around a struggling Italian restaurant. Kim recalls, “That’s where I learned to cook Italian food. They had great recipes but they weren’t focusing on what they should have been. I terminated employees who didn’t want to meet our standards, then retrained those who did.” Being a turnaround expert really appealed to Kim who has admitted to becoming bored easily. She is always looking for something new to inspire her.

Kim’s Door County career began in 2000 when she and her mother, Mary Jo, who also had significant restaurant experience, purchased local favorite, the Village Café. Very few changes were made to the menu, but she did change the artwork decorating the walls. The Village Café had always been known for their great food and contemporary art offerings. Kim and Mary Jo put their own personality into the choices they made, thus maintaining the spirit of the restaurant. “Village Café hits your senses,” Kim explains. “Customers’ eyes light up when they come through the door. They are surprised by all the artwork on the walls. We always say that if you can’t wake up by coming in for breakfast at Village Café, there is nothing that’s gonna wake you up.” Whether it’s the artwork, the food, or the reassurance of breakfast being served all day, Kim and Mary Jo have made sure that the Village Café is a mandatory stop along the way through Egg Harbor.

Adding to the  list  of businesses, in 2002 Kim and Mary Jo started Villaggios in Juddville, which was the Italian-themed restaurant that Kim had imagined years before. Their loyal patrons followed them there, as did their staff. Splitting their time between two restaurants, they really had to rely on their employees to know what to do when they literally couldn’t be in two places at once. Mary Jo applauds her daughter’s ability to train their team. “She knows how to equip them with the ability to make decisions and run things whether we are there or not,” she says. Their philosophy has always been to give employees a complete picture of the restaurants’ financial goals. Kim elaborates, “I believe that knowledge is power. If our staff knows what we are working towards, they are more invested in the outcome.” The staff also appreciates the fact that they have year-round employment with compensation that is considered higher than average. This could explain their low employee turnover rate.

Local resident Sarah Doneff Nelson worked for Kim and Mary Jo from 2003 through 2005 waiting tables in both restaurants. “They are very appreciative of their staff, sincere in their praise, and they know how to create a fun atmosphere that appeals both to the people who work for them and the people who frequent their restaurants,” she attests.

Mojo Rosa’s Cantina is Kim and Mary Jo’s latest venture. They purchased the Olde Stage Station in Egg Harbor mid-season 2007 and changed the menu to authentic Mexican. Apart from the décor, one of the biggest changes was making the restaurant and the adjoining bar smoke free, just like their other locations. Along with Olde Stage, they also bought the Dough Exchange next door, which they renamed the Pink Bakery. Changes there include a move toward heartier artisan breads and an expansion of their wedding cake trade. It is a natural extension of their catering business, which has become a substantial part of MoJo Enterprises. Devotees have the choice of having meals catered in the restaurants or at their own locations with a large variety of menu selections.

“I know sometimes people question how much we have taken on,” Kim confesses, “but we love what we do. We work hard and we don’t have an excessive lifestyle. Our payout will come 20 years from now after we pass the torch on to somebody else. We have a 15 year-old employee who introduces himself as the future owner of the Village Café,” she quips. All questions aside, there is no doubt that the women of MoJo Enterprises have a strong desire to impact their community, and it looks like they will be around to do so for some time to come.