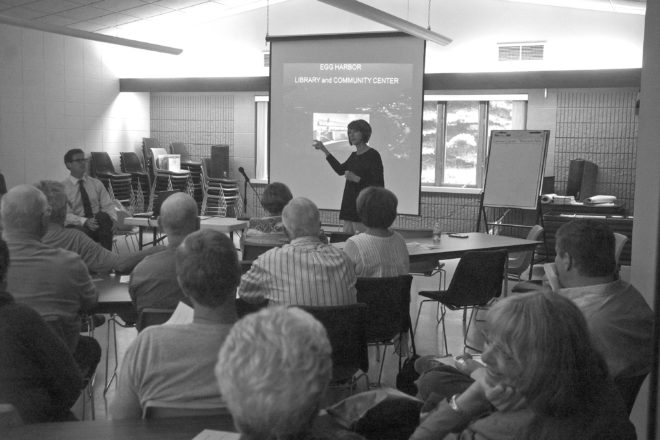 At a recent municipal meeting on the “quiet side” of the peninsula, a town board was considering buying a “strategic” piece of property for its future when a resident suggested by even considering the property purchase, the town board was becoming as spendthrift as the Village of Egg Harbor.

Of course that resident was referring to the $6 million library and community center that is being built in Egg Harbor this summer with a combination of public ($1.5 million) and private dollars.

But if the meeting held June 20 is any indication, the new library and community center – to be known as the Donald and Carol Kress Pavilion in honor of the major donors – will be the envy of every municipality on the peninsula and beyond.

Kaaren Northrop, a member of the ad hoc library committee, presented a brief background of how the library/community center came to be situated where it is and some of the plans for the building and its “fantastic potential for rental.”

That is no pipe dream from supporters of the project. Groups are already lining up to use the pavilion and promising to bring people with spending power to stay in the village.

For example, Tom Young, bridge player and owner of the Gibraltar Grill in Fish Creek, attended the meeting to hear more about the new community center and the potential to bring his bridge invitational to the new building.

Young said he holds the invitational twice a year and is currently renting the Gibraltar Fire Department building for the event, where he has to limit the number of players to 80 people.

“Hopefully with this new space, we won’t have to have a limit on the number of people that can participate,” he said, adding that it should mean a significant economic impact for the village with 100 people arriving just for this event.

“They’re older. I literally am the youngest person in the group, 65,” Young told the Pulse. “They are not bashful about spending money. They shop. They eat. We generally try to do these mid-week so the people come up early or stay after it’s over for another weekend. The other thing that is very attractive about Door County, a lot of these people have spouses or partners who don’t play bridge. This is one of the few venues their spouses can come and there’s plenty for them to do.”

He said both organizations will be able to hold programs in the upstairs hall using the state-of-the-art audio-visual equipment being installed, which includes nine 55” TVs in a video wall that are blended together to appear as one projection TV.

Herbst also suggested the potential for doing historic tours of the village from the second floor wraparound deck of the community center.

Tina Kakuske, director of the Door County Library System, explained the dramatic change libraries have undergone just in her 24-year library career, and how the new Egg Harbor Library will fit into that model with “a true 21st century vision” as library and community gathering place with “a happy buzz.”

There were a number of technical questions from the audience, such as what will rental pricing be for the hall and will residents get a break on pricing? There were also several questions about who is going to manage the building and bookings for the hall. All those details are still being worked out, and the village board is considering management options for the building, which is expected to open with the new year.