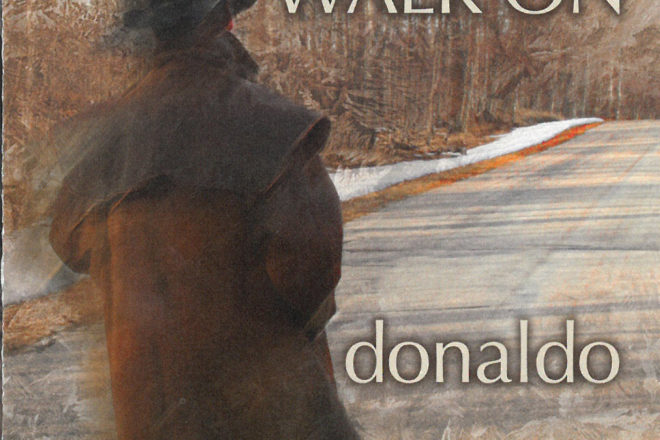 A friend turned me on to a 1975 recording called Jupiter. Upon first hearing, I thought the artist – with a Robert Plant-ish lilt to his voice and a powerful 12-string that sounded like Jimmy Page’s – was an admirer of the quieter side of Led Zeppelin.

After repeated listenings, I will stick by that initial assessment. Someone else once wrote that the singer sounded like a cross between Donovan and Gary Wright (of Spooky Tooth and later “Dream Weaver” fame). But I think you get the idea of where the record was coming from in those descriptions.

The album comes with a three-page story inside, “The Myth of Jupiter,” as well as an illustrated lyric sheet that opens like saloon doors, the backside of which depicts the thin, bearded artist dressed in a puffy pirate shirt and the mandatory patched flare trousers of the time, and holding his 12-string.

The musician is Don Thompson, who today owns Door County Bakery on Highway 57 in Sister Bay.

Flash forward four decades – or 41 years to be exact – when Thompson releases a new recording under the name Donaldo. 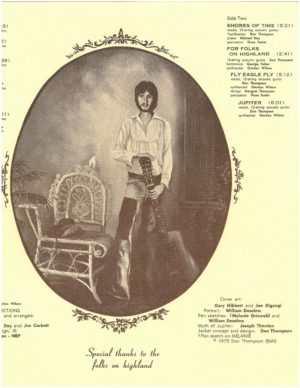 Walk On is the name of his latest record, and walk on Thompson has since Jupiter. The sensitive hippy has come out of those decades tough as leather and sounding more like a gruff country outlaw than a hippy survivor.

Donaldo dedicates the record to his father, Bob Thompson, “thespian extraordinaire” who “inspired all who were fortunate to work with him.”

He writes, “I wrote the song ‘Walk On’ the night he died.”

Rather than mournful, it’s an incredibly upbeat tune, with the message “you best walk on…to the next stage.”

Thompson wrote all nine songs and recorded them at Hans Christian’s studio, Studio 330, in Sturgeon Bay. As well as Christian on cello, fretless bass and lap steel, the rest of the Walk On band are members of Big Mouth – Jay Whitney on electric and slide guitar, Paul Sowinski on bass and Pat Judy on drums. All but Christian and Sowinski add vocals as well.

They are joined on vocals by Christine Mild, a Chicago singer who among her many credits is known for Always…Patsy Cline. The way her voice meshes with Thompson’s on the third track “Old Shoes” is truly amazing.

Great band. Jay Whitney always plays great guitar, but he sounds exceptional here, particularly on several exciting stinging slide guitar segments and the David Gilmour-ish opening to track 4, “Poet’s Game” (which is probably the closest track to what Thompson did on Jupiter).

The record is co-produced with Thompson by Pete Thelen, who also co-wrote my favorite song on the record, “All Hat,” which, in a perfect world would become the theme song for former Milwaukee County Sheriff David Clarke.

Mild takes the lead on “All Hat” and owns it. You believe this really is a lesson she learned from her mama. “Do not dance with a man who’s all hat and no cattle.”

Thompson and band rock and swing these songs. I’m just sorry it took an entire year to write about this CD.

You can order a copy of the CD or download it at cdbaby.com, or you can pick one up at Door County Bakery.