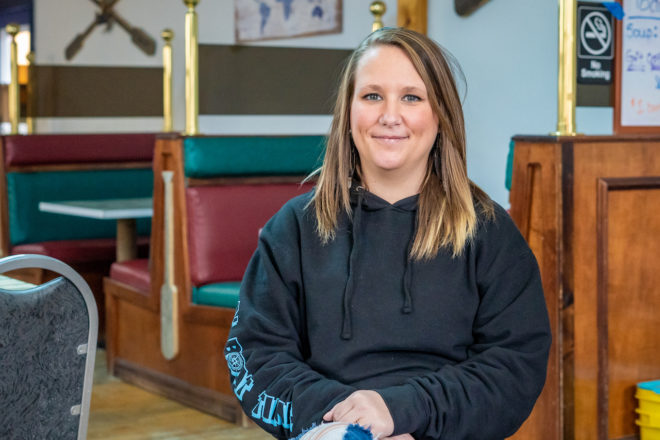 If you stop for a meal at A’Boat Time, a new family-run restaurant in Sturgeon Bay, you might see other diners brushing up on their sign language.

That’s because one of the servers, Brook Black, was born deaf. Instead of taking orders verbally, she hands customers a laminated menu with dry-erase markers so they can circle their orders. If she or the customers have questions, they write them down.

Most customers communicate with a mixture of writing, pointing and talking because Black can read lips. Some even go the extra mile by learning how to sign their order, according to restaurant co-owner Stephen Homan.

“It’s always nice when people do that,” said Black, signing, with her daughter – high school sophomore Kiara Boll – translating for her.

Black was 34 when she first heard her daughter’s voice with the help of a cochlear implant: an electronic device that allows some deaf people to hear. Noises sound muffled to her through the device, and sometimes it’s difficult to tell where they’re coming from and what voices are saying. But it’s getting easier, and Homan and co-owner Danielle Hall have both noticed that Black’s voice is becoming clearer.

Homan, Hall and Black were family friends long before Black started working at A’Boat Time. When Homan and Hall opened the restaurant in November 2022, Black asked whether she could work there.

Saying yes was a no-brainer for Hall.

Hall said Black was nervous about being a server at first, worried that customers would grow impatient because she couldn’t communicate with them in the way other servers would, but she has been pleasantly surprised by how welcoming people have been to her.

“Everyone has been really nice,” Black said.

Though she’s never had any problem customers, she knows Hall and Homan would have her back if she did.

“If people have an issue [with her], they can leave,” Hall said.

Black moved to Door County in 2019, when her husband, who is in the Coast Guard, was stationed there. She lived in Sacramento, California, before that, working as a deaf interpreter for an area school district. After she moved to Sturgeon Bay, she worked at a few local restaurants – Kitty O’Reilly’s Irish Pub, Casey’s BBQ and the Door County Fire Company – in the back of the house or as a host.

Having spent years in Sacramento, Black was apprehensive at first about moving to a smaller area because she knew there would be fewer resources for deaf people and a much smaller deaf community. She said she knew only two other deaf Door County locals.

However, she found that living in a small area as a deaf person was actually easier than living in a big city. She finds in Sturgeon Bay that people are more patient and more willing to take the time to communicate with her.

Often, people want to ask questions about Black’s experiences as a deaf person, and her daughter fields a lot of questions about her mom from her high school peers: Can your mom drive? (Yes, she’s deaf, not blind.) What if she gets pulled over? (Police cars have flashing lights.) What language does she think in? (The same one that she reads and writes in: English.) Does she understand Spanish sign language? (No, each language has a different sign language.) When she’s dreaming, do people talk to her or sign to her? (Some of both.)

Another common thing that hearing people do – and that Black finds strange – is to call her “inspiring.”

“I wasn’t expecting to be inspiring to other people,” she said. “I’m just going on with my life and doing what I have to do to live with my family.”

As a business owner, Homan hopes that Black’s visible position at A’Boat Time will encourage other employers to hire people with disabilities.

“The fact that so many people are shocked that she is a server shows how much the general population doubts the abilities of [deaf people],” Homan said in an email. “I hope this story inspires more employers to be more willing to hire someone who is a bit different.”