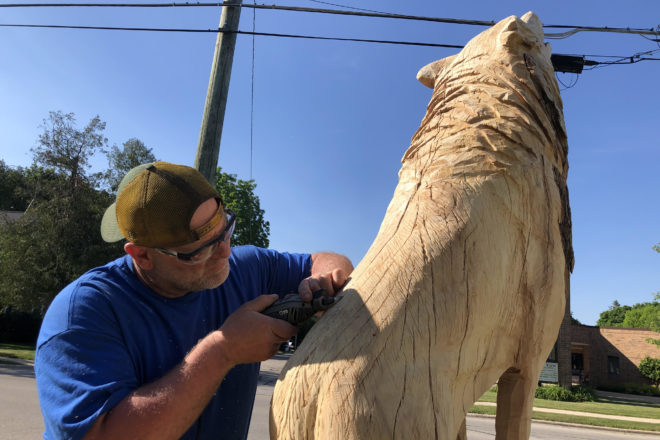 Aaron Delorit uses a grinder to texture fur on a wolf carving in front of his Sturgeon Bay home in the 300 block of West Maple Street. Photo by Craig Sterrett.

Shipyard employees sometimes have more talents than they can show in the workplace, but steel fitter Aaron Delorit made a big reveal of his artistic abilities this spring and summer.

It began on a day off from helping to build ships such as the M/V Mark S. Barker, when he had watched a prolific local chainsaw artist working at the county fair. He thought for a while and told his wife, Lori, “I can do that.”

After a large, dead ash tree split and fell apart in front of his house in the 300 block of West Maple Street, he asked the city crew to leave a 10-foot-tall trunk of it intact. Discoloration patterns in the wood and the shape of the remaining trunk gave him an idea to carve a wolf as a 22nd-anniversary present for his wife.

Delorit had never tried carving with a chainsaw before, and he had to borrow one from a friend to rough out the shape. He then used an angle grinder and various bits for much of the shaping and texturing of the fur, and he likes that he got the proportions right on his first try.

In addition to his skills with metal at Fincantieri Bay Shipbuilding, Delorit has prior art training. He got interested in oil painting while growing up in Sioux City, Iowa, where his father, Denny, was based while playing professional fast-pitch softball nationwide and around the world.

Delorit studied graphic arts at a university, but he readily admitted that his main focus wasn’t school work.

“I went to college for baseball,” he said.

He continued using oil paints because he loves how vividly they can create light. Years ago, he had a few of his paintings for sale in his mother’s and sister’s Egg Harbor restaurant, Village Cafe.

Delorit said he’s not well acquainted with any other artists at the shipyard, but one of his work buddies, Toby Vandenberg, has been his biggest critic while watching him carve. The two enjoy playing guitar together, and Vandenberg offers support and encouragement to Delorit’s son, Johnny, a member of a band called The Coves.

Delorit said his wife and friends like his wolf, and he hopes the neighbors like it, too.

“The boys at the yard are super supportive of what I do,” he said.