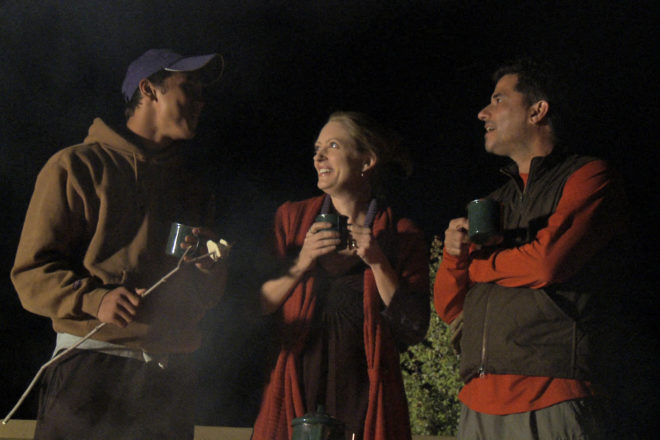 Door County is blessed with having amazing actors and actresses that visit for the summer to get involved with theater productions put on for tourists and locals alike. One of those actresses is Deborah Staples, who’s featured in Waterwalk, a film that’s screening in Door County July 29.

Staples is a theater enthusiast from Milwaukee who bounces around for productions in the Midwest, though she comes to Door County in the summer. In Milwaukee, she’s a Resident Acting Company Member and Associate Actor at Milwaukee Repertory Theater. She’s been a part of 120 shows total, and is on stage now at Door Shakespeare.

Theater isn’t her only forte. Staples been featured in multiple films, including 2012’s Waterwalk, as well as Baraboo and Pilot Error.

Waterwalk is a story about a father and son who try to reconnect through a canoe trip on the Mississippi River. Robert Cicchini and Chase Maser play lead roles as father and son, respectively. The film includes some other well known actors to Wisconsin including John McGivern, Lee Ernst, Torrey Hanson, Angela Iannone, Jacqui Troy, April Paul and Laura Gray.

The difference between being on stage for a live audience and working in film is quite different. On stage, it’s the actor’s job to direct the audience’s eye to certain things, while in film, you don’t have agency over your own performance, Staples said. You try to make possibilities for the editor, and you don’t see how it’s going to turn out until it’s finished.

In Coming Up For Air, another Michigan and Wisconsin-made film in the making, Staples takes over a lead role with her co-star Chase Maser. She’s also co-written the script for the first time with Roger Rapoport, who also co-wrote Waterwalk.

This film, expected to be released in 2019, is about a single mom who’s raising a son that’s working for a spot on the men’s Olympic diving team. He struggles under the pressure and starts to lose his grip on school and his sport. Like Waterwalk, this film includes actors familiar to Door County audiences:  Carrie Hitchcock, Mark Corkins, Torsten Johnson, Neil Brookshire and Doug Mancheski.

For Staples, the story has been a privilege to co-write, though she knew it would be at a personal cost. She knew she’d really have to pull it out of her soul.

Staples said that the most challenging part of making this film was its enormity. There were so many moving parts to it – locations, costumes and finding stunt doubles for dives. There was always lots to do, and sometimes it felt like they were fighting for survival.

Not only did it come as a personal cost as a writer, it also came as one as a person. Staples was filming and writing during a span of time that she was also participating in six different theater productions, including one in Door County.

“I would finish my show on Saturday night, drive down to Manitowoc, catch the SS Badger across Lake Michigan, wake up in the morning on four hours of sleep in Ludington, Mich., and we would film for the day,” Staples said. “Then I’d have to catch the ferry back for my show the next day.”

All of that’s worth it though – she’s had an amazing time working with director Robert Cicchini and co-writer Rapoport. They all cared so much about the creation of the film and they were a really tight team, she said. They’d be up till four or five in the morning after a 14-hour day and still be making decisions about the film.

When asked about her favorite part, she said, “Looking at them in those early morning hours and thinking, I’ve done something with these people and I’m grateful to them.”

Overall, she hopes that when people see the film, they will recognize themselves in it. It’s about stages of life, family and mental health. Her hope is that it will create and empathy and understanding in people that may have not been there before.

Waterwalk will be screened July 29, 12:30 pm at Björklunden in Baileys Harbor. For more information visit waterwalkthemovie.com.