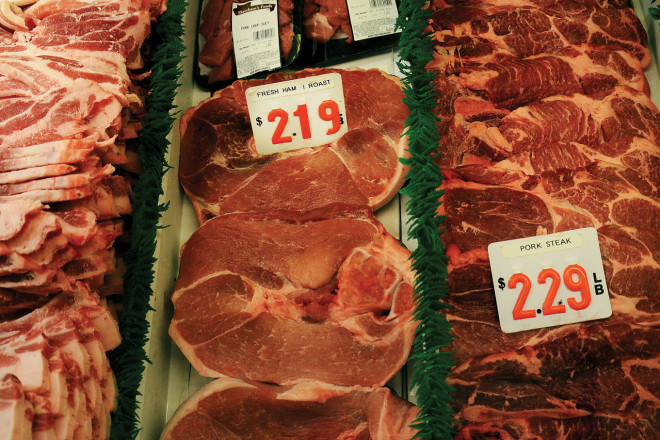 At Marchant’s Foods in Brussels meat processing is all about continuity, in multiple senses of the word. It’s not just about knowing where your food comes from and how it’s handled before it arrives in your refrigerator or freezer. It’s also about knowing who it’s being handled by.

“We’ve been coming here for 50 years,” says Jim Sisel of Casco, a Marchant’s customer who lived in the area, moved away, and then moved back again. “We love their meats.” 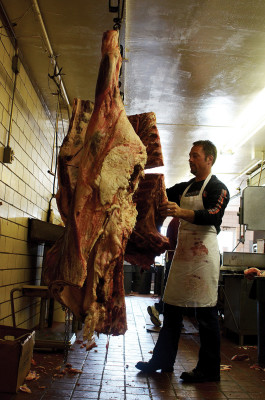 As Jim and his wife Daun stand in the back room of Marchant’s, where the meat is passed down a fairly tight row of six workers wearing aprons dotted with animal remnants and cut into whatever portions customers desire, they tell me they’re waiting on a side of beef from a cow Jim’s cousin gave them.

Daun says the quality of the meat and the cut is always fantastic, but it’s not the only reason she and Jim have kept coming back to Marchant’s.

“We like the way they do business,” she says.

Farmers have been bringing their pigs and cows to be processed by Marchant’s Foods since 1947, when the business was opened by Willard and Beatrice Marchant. In 1984, the meat processing plant and grocery store was handed off to Willard and Beatrice’s son Dave and his wife Sue.

“I grew up with it,” Dave says, as he effortlessly cubes some meat behind the grocery store’s deli counter. “I tell people that when I was knee-high to a grasshopper I had to start making sausage. It’s all I ever did.”

Sue says, about 10 years ago, the couple became concerned when small farmers in the area began going out of business. They thought it might mean the end for the meat processing side of Marchant’s. 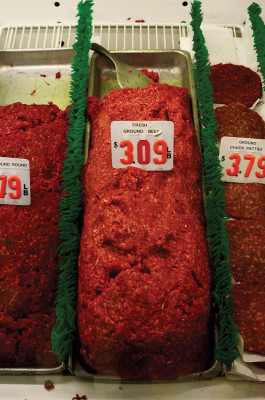 But as other processing plants went out of business and farmers from both north and south started to look for a new place to take their livestock, Marchant’s got the boost it needed to keep going.

“It has not quit,” says Sue. “If anything it’s gotten stronger.”

Farmers deliver their animals to Marchant’s on Mondays, and on Tuesday they’re slaughtered, cleaned, and hung in the plant’s giant meat locker. The meat sits in the locker for several days to tenderize before eventually being made into steak, sausage, hamburger, bacon, or whatever else a customer wants.

Sometimes the customer is Marchant’s itself. A portion of the meat that comes into the plant is slotted into the deli at the Marchants’ grocery store or put on shelves as flavorful snacks.

While some recipes – like the secret one for Marchant’s summer sausage – have survived from 1947 to the present day, Sue says there are definitely some things that have changed over the course of 65 years.

“We’re experimenting all the time,” she says, as she shows me a roll of beef stuffed with cheese and spinach, a.k.a. a cheddar-spinach pinwheel. “You get a demand, and you try to 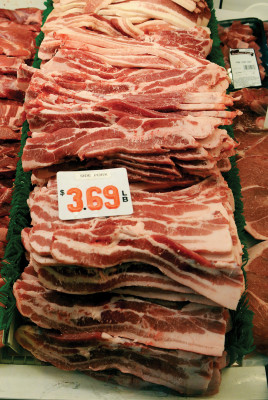 As demand for new products like the pinwheels has risen, demand for other products, like beef liver and bones used for soup, has fallen but not completely dropped off.

“Old-time people still look for this kind of stuff,” says Sue, showing off some of the more unconventional parts of the cow that Marchant’s keeps stocked in its coolers. “So we still have it out here.”

The continuity at Marchant’s is unlikely to break anytime soon, as three of Dave and Sue’s five sons are currently involved in the family business. One son, Mike, runs his own store in Sturgeon Bay and helps out at the store in Brussels. Two others, Mark and Craig, work in the processing plant and behind the scenes.

“I’ve been doing meat cutting for 26 years,” says Craig, echoing his father’s statements. “As long as the place is here, I’m sure I’ll be doing this.”