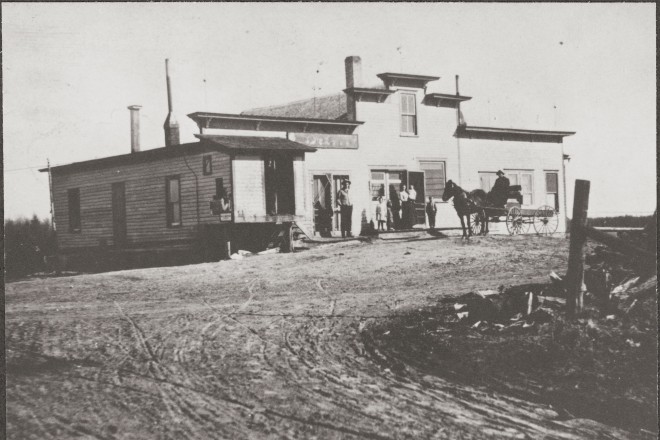 Little documentation survives from the hey-day of cheese factories in the early 1900s.

It seems that no matter how many yellowed pages are flipped back through the history books, Door County is remembered for growing fruit. However, cherry and apple blossoms are not the only agriculture to speckle the horizons of Door County’s history. Door County has had a rich, agricultural tradition over the years which includes contributing to Wisconsin’s image as The Dairy State.

Nowadays, Wisconsin’s reputation manifests in the form of foam cheese heads on Packer game days, but this wasn’t always the case. According to Cheese: The Making of a Wisconsin Tradition by Jerry Apps, “From the time of statehood (1848) until well into the 1870s, Wisconsin was a wheat-growing state, with few dairy cows. Dairy farming did not begin until the wheat farmers could no longer grow the crop.” Increasing numbers of dairy cows were the most obvious sign of this agricultural transition in Wisconsin’s history. Another prevalent sign was the cheese factories springing up throughout the state. By 1920, all but three counties throughout Wisconsin had at least one cheese factory.

Door County was certainly not one of these three. In fact, according to Hjalmar R. Holand’s History of Door County, Wisconsin: The County Beautiful Volume 1, originally published in 1917, “There are now more than sixty cheese factories in the county and new factories are fast being built all over.” It was discovered fairly early on that Door County was especially suited for dairying and cheese production because of its cooler temperatures, abundance of water, and vast fields of clover and other grasses. Apparently Door County also lacked certain milk bacteria “which interferes with the most successful fermentation and curing of cheese in other parts of the state,” says Holand. “Door County is rapidly obtaining the flattering reputation of producing the best American Cheese in the market.”

At one point there were a plethora of cheese factories in Door County – perhaps too many because not all of their stories were saved. Surely, oral accounts have been passed down through the generations about a majority of these factories, but few stories have lingered beyond dinner table discussions. Two factories have garnered some notable attention over the years, however, and have stretched beyond people’s memories and into some form of documentation – one for its location the other for its longevity.

The cheese factory on the corner of Town Line and Range Line Roads on Washington Island was chronicled by Cheryl Ganz, a relative to the original cheese maker, in an essay in the Door County Almanak No. 4. Her essay, “The Island Cheese Factory,” weaves the story of The Washington Island Creamery Company first writing to Madison in 1925 in search of a cheese maker, all the way through the closing of the factory’s doors around 1970.

The answer to that original query brought Andrew Justinger, Ganz’s relative, to Washington Island – a cheese maker who had been working in a Sheboygan Falls cheese factory. Justinger quickly established a life on the island and created his place within the island’s community and social circles. He married Myrtle Anderson and had three children, Herbert, Daryl, and Dudley.

In the peak season, Justinger and an assistant handled the supply from the 45 dairy herds on the island, collecting and processing 7,000 pounds of milk a day. Inhabitants of the island consumed 600 quarts of milk while the rest of the milk was used to produce butter and cheese – around 70 pounds of butter and 600 pounds of cheese. According to an REA newsletter quoted in Ganz’s essay, about 75 percent of the butter and cheese produced on Washington Island was consumed by islanders.

Eventually, Justinger purchased the island’s cheese factory from Pete Eiler. On May 5, 1949, mere months after Justinger officially owned the factory he’d established from the ground up, he could do nothing but stand by and watch it burn to the ground. Washington Island’s fire fighting capabilities at the time couldn’t save the factory; however, the spirit and sense of community on the island could. Within four days of the fire, the islanders pooled their resources together and Justinger was back making cheese in a makeshift factory.

After the cheese factory was rebuilt, there were quite a few more years of success before its slow spiral of decline started. When Dudley Justinger, the son Andrew was grooming for takeover of the factory, died from a ruptured appendix in 1958, there was no longer a clear path laid out for the island cheese factory’s future. When Andrew died a mere year and a half later, concerns about the factory shifted from the future back to the immediate present. Even though the farmers on the island incorporated and bought the dairy, The Washington Island Co-operative Dairy, Inc. was sold and dissolved less than ten years later after struggling with financial problems and cycling through seven different cheese makers.

The struggles of the cheese factory on Washington Island were not uncommon in Door County; in fact, only one cheese factory continues to operate in the county today – Renard’s Cheese. Howard Renard purchased the Rosewood Dairy located on County S between Sturgeon Bay and Algoma in 1961, and although he “officially retired” in 1994, he continues to help out with the daily operations of running a cheese factory. Howard feels “lucky to have someone to take over – otherwise we wouldn’t be here either.”

Renard’s Cheese has turned into quite a family enterprise over the years with three generations making cheese. Brian Renard, one of Howard’s seven children, recalls, “Making cheese was always a part of chores…coming home after school and making cheese and in the summer getting up at 2:00 am to help out.” Brian didn’t always anticipate following in his father’s footsteps. However, he and his wife Tina, along with his eldest brother Gary, Gary’s wife Bonnie, and Gary’s son Chris, now operate the family’s cheese factory as well as two retail locations in Door County.

Not only do the Renards have a formidable family tradition of making cheese that has contributed to their longstanding success, they also fill a niche in Door County’s retail market. Renard’s Cheese specializes in 12, 22, and 38-pound wheels of bandage-style cheese. There are less than ten factories in Wisconsin that make the type of cheese that Renard’s makes. Chris Renard asserts, “Renard’s is for show while other [cheese makers] are for bulk.”

Small, independent cheese factories like the one on Washington Island and Renard’s Cheese, along with the other 60 or so that once speckled the county have made an impact on Wisconsin’s reputation as The Dairy State. Each factory, whether people remember its story or not, has a place in history and has shaped the essence of Door County.