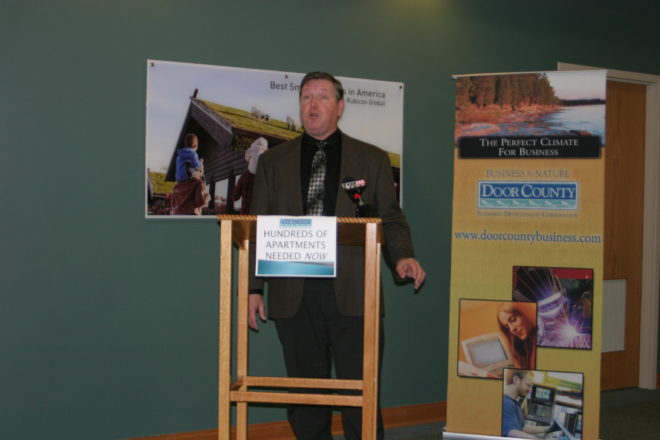 The first-of-its-kind analysis of Door County housing needs was unveiled at a Feb. 4 press conference at the Door County Economic Development Corporation (DCEDC) in Sturgeon Bay.

The study, conducted by the engineering firm AECOM, found the county has a workforce rental-apartment deficit of 470 units – 140 in the north and 330 in what was dubbed central Door County (Sturgeon Bay). Add to that another 100 rental apartments that will be needed by 2023.

There is almost an equal deficit for seasonal employee beds, amounting to a shortage of 455 beds: 50 in the south, 200 in the north and 205 in the central region. The future demand through 2023 adds another 115 beds for seasonal workers.

“People considering relocation to Door County over the past few years have experienced the challenge of finding housing, especially rental stock,” Schuessler said. “This analysis reveals just how far behind we are to meet the present demand. We need to grab a gear and get needed housing online.”

Here are other findings about future demand:

Schuessler noted that Sturgeon Bay has 164 apartments either completed or under construction, and Sister Bay will have another 40 apartments available by the end of this year, but they fall far short of the need.

The analysis determined that each 100 housing units can mean nearly $5.4 million in wages to the local economy, which amounts to a loss of more than $25 million due to the housing deficit.

Sturgeon Bay Community Development Director Marty Olejniczak was one of the officials on hand for the press conference. He said the next step will be up to each municipality to use the study for its own needs.

Jack Moneypenny, president and CEO of the Door County Visitor Bureau, mentioned that his organization runs the job-posting website jobsindoorcounty.com, where anyone can post a job opening.

“Jobs that have housing with them, those are always the very first jobs to go. Thousands of people are on there looking for jobs. The first question they ask is about housing,” he said.

Moneypenny also highlighted the unusual problem of living on a peninsula. Unlike most other counties, which can draw workers from neighboring counties, Moneypenny said Door County is essentially a cul-de-sac.

“We can only pull them one way up the street,” he said, “so we really need to be smart and clever about it.”

“The good news is that we have a lot of sites available,” Schuessler said, adding that DCEDC is going to organize tours of potential sites with local and regional developers.

DCEDC has already been working with several municipalities to develop potential housing sites, and Schuessler mentioned a Feb. 13 planning session with Liberty Grove to look at its housing issues.