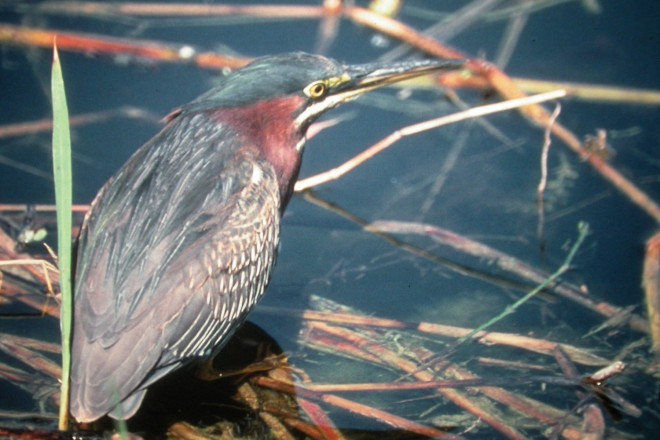 It’s quite logical to assume that Door County, having more miles of shoreline than any other county in the continental U.S., would be home to many herons in summer – or at least during spring and fall migration. Rocky and sandy shores surely do abound, but marshes, rivers, vast mudflats and sloughs, which are the preferred nesting and food-finding habitats for the wading birds, do not.

Fortunately, there are several good sites where the long-legged, long-necked water birds can be observed fairly reliably. The four herons and their heron-like relatives which do nest in Door County include the Great Blue Heron, Black-crowned Night Heron, Green Heron and American Bittern. If a fifth nesting species were to be found here it would be the Least Bittern, a small, very shy and difficult-to-locate bird of the marshes. One of the most natural and least tamed of the areas where these reclusive birds have occasionally been observed in past years is the Mink River Estuary.

Three other wading birds which have been seen in the county are the Cattle Egret, Little Blue Heron and, possibly the most commonly seen especially later in summer, the Great Egret. The one verified sighting of a Little Blue Heron, observed along the east shore of Baileys Harbor several years ago was what would be classified as strictly “accidental” (an occurrence of a bird in an area considerably out of its ordinary breeding range). The small Cattle Egret, having a yellow-orange bill and comparatively short legs, bill and neck, is a common nester at the famous Horicon Marsh (east of Waupun, Wisconsin), as is the tall stately Great Egret with its yellow bill and black legs. It is not uncommon for these birds to drift northward after the nesting season. The largest number of Cattle Egrets I observed in late fall, numbering nine, were feeding along the shore near the Gordon Lodge north of Baileys Harbor. The extensive nesting range of these small stocky birds extends into southern Canada.

The most widely-distributed and best-known heron of the U.S. and Door County is the Great Blue Heron. It is the largest and most majestic of these fascinating water birds. Invariably you will find these “loners” fishing in the shallows along the shores of rivers, marshes and other wetlands. Surprise it and you can expect it to voice its displeasure with several loud, hoarse squawks as it takes off and, perhaps to further display its resentment at your intrusion, will leave behind its long, chalky “calling card” of excrement. This habit of not only the Great Blue Heron but also other herons and their relatives led to their common nickname of “shitepoke.”

The extensive summer range of the Great Blue Heron stretches from Canada to the West Indies and Central America. These tough birds may winter in open water areas of central to southern Wisconsin. Our southern Door County Christmas counts in past years have turned up a few in the open spillway and shallows of the Ahnapee River below the Forestville Dam. The backed-up watercourse north of the dam can be a very good nesting and feeding site for the Great Blue Heron, American Bittern, Green Heron and the Black-crowned Night Heron.

Perhaps the reason that so many people overlook the Black-crowned Night Heron is that it closely resembles a gull when in flight. Its heavy body and short thick neck are also not very heron-like. Seen from below while this little heron is in flight usually means its black crown is hidden from view. Its yellow-to-orange legs are also considerably shorter than one would expect to see on a heron. Typical of other herons and their heron-like relatives, when flying it has a habit of folding its neck into an “S” shape and tucking it between its shoulders. This is also the bird’s hunting posture:  neck folded and cocked, ready to lash out in an instant, perhaps double or more than its folded length, as it spears its prey. A point to remember is that it’s the cranes that fly with their necks extended straight outward.

A wonderful moment of serendipity occurred a few years ago when my wife, Charlotte, and I were observing and photographing birds at Little Lake bordering Sturgeon Bay immediately north of Bay Shipbuilding. A Great Blue Heron had been holding down “center stage” until a Black-crowned Night Heron landed on a dead, partly-submerged branch very close to the Great Blue. Unknown to us, its colors blending well with the surrounding branches and aquatic plants, was a Green Heron. Having three of the four nesting herons of Door County within only a few feet of one another, and appearing on the same photograph, surely was a welcome surprise.

It’s the iridescent green feather color, which from a distance appears to be generally dark and more blue than green, that gives the Green Heron its name. One of its older names was the Little Green Heron. When asked how this name came about, our answer has been, “Because the bird has very little green on it.” Its flashy, colorful, chrome-yellow-to-orange legs are very distinctive as are its chestnut-colored neck feathers and its loud, far-reaching and descending “KEW” call.

It would be an unusual outing to the Mink River Estuary without seeing an American Bittern, neck drawn tightly between its shoulders while in flight. Here is a marsh recluse of the first magnitude, often caught off guard while you are canoeing or kayaking and frightened into flight. One of its other wonderful attributes, most often heard in the early morning or evening, is its strange “oonck-a-tsoonck” call, hardly resembling any other known living creature. One has to see it perform in order to believe this bizarre vocal outpouring is emanating from a bird. How beautifully the American Bittern can point its head skyward and virtually “freeze” in position, thereby blending remarkably well with its aquatic plant surroundings.

All herons and their relatives, for the most part, are steadily decreasing in number throughout their breeding range in North America. They can’t do anything to improve their deteriorating environment, but we can. To learn more about the effort, visit www.greatlakesforever.com. The herons and other creatures of the wetlands will thank you.