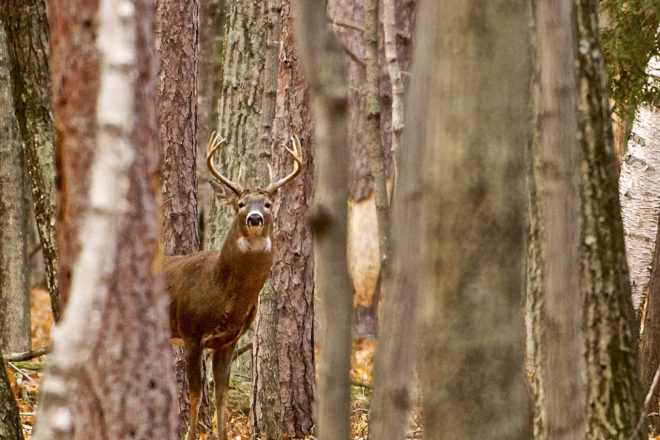 Hunters who want a shot at extra venison this season have plenty of days of blaze orange and camo to go.

By the time the last broadhead is fired during an extended bow and crossbow season Jan. 31, archers and crossbow users will have had 139 straight days of opportunities to be afield. Most gun hunters, meanwhile, will have had 32 days to try to fill tags, even more if a youth or disabled hunter.

Twenty-three straight firearm deer-hunting days ended Sunday, Dec. 9, but there’s more to come: Door and Kewaunee Counties are included in an antlerless-only holiday hunt Dec. 24-Jan. 1, and the archery and crossbow seasons in Door County have been extended to Jan. 31.

Through early December, Door hunters registered 4,168 deer, including 2,291 does and fawns. Even before the doe seasons, it was the seventh straight year of an increase in antlerless harvest here. Preliminary numbers as of Dec. 3 had the buck kill at 1,877. Even if it tops 2,000 after all seasons, that’s a big drop from last year’s Door buck-kill record of 3,200.

Dave Tupa of Jacksonport, chair of Door County’s delegation to the Wisconsin Conservation Congress, would like to see the county managed separately north to south.

“It’s embarrassing that Door County is the only deer-management unit in the state giving away five antlerless tags per archery/crossbow tag and five per gun tag, knowing that the deer population can’t support this management plan,” said Tupa, a science teacher and Northern Door hunter.

The County Deer Advisory Council (CDAC) had considered an antlerless-only deer hunt when it met last April, but the motion was defeated 5-2. Door’s 5,264 whitetails registered last year was an all-time record. The buck take included 2,366 with firearms, 486 with crossbow and 348 with bow. The antlerless numbers were 1,517, 323 and 224, respectively.

Door CDAC’s three-year recommendation completed in October, 2017, was to try to decrease the herd. But the group did not recommend a zone boundary modification.

A total of 151 members of the public submitted comments on the Door CDAC’s preliminary recommendations last spring. Seventy-nine people rated the antlerless quota as too high or much too high; 57 as about right and 11 as too low or much too low; four said they were unsure.

Using a mathematical formula that’s been in place for decades, it was estimated there were more than 1.3 million deer in Wisconsin after the 2017 hunting seasons. Door County’s herd was estimated at about 17,000, double what it was in 2009 (after four earn-a-buck seasons in a five-year period between 2004 and 2008).

County Deer Advisory Council members will work with their local biologist, forester and wardens to assess the situation before making recommendations for 2019 with the help of public input at meetings in March and April.

A summary of trip data from the first two years of mandatory reporting will be shared, along with lake whitefish survey and research updates.

More information and updates can be found at dnr.wi.gov/topic/Fishing/lakemichigan/GreenBayGuideInformation.html.

Entries are being accepted for the annual Great Waters photo contest and writing project. Top photos will be included in a 2020 DNR calendar.

Winners will receive the 2020 calendar by mail. Learn more at dnr.wi.gov/topic/GreatLakes/Contest.html.

The public can comment on a five-year draft of the Statewide Comprehensive Outdoor Recreation Plan used by the DNR for policy and planning decisions and grant allocation.