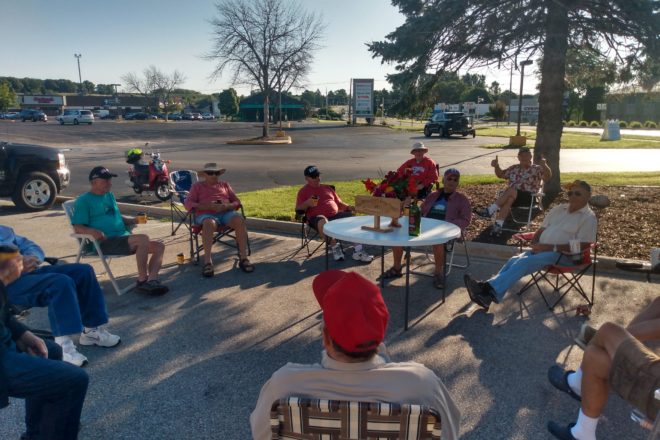 The gang. Those whose faces are visible (from left seated around the table) are Bill Rehman, Gary Bellin, Bob Gamble, John Berns and John Schiesser. Seated on the island are Mike Barry (left) and Richard Woldt. The back of the head in the frame belongs to Bill Karas. Photo by Michael Shaw.

Neither rain, nor wind, nor the threat of a potentially deadly contagious disease could keep these men from their appointed grounds – coffee grounds, that is.

Except for about the first month of Wisconsin’s coronavirus shutdown in the spring, the regular morning coffee klatch of senior-aged men at Sturgeon Bay’s east-side McDonald’s found a way to keep its daily get-togethers percolating. The fast-food restaurant’s dining room is still closed except for takeout, so the pandemic forced the informal club – like many a business and civic organization – to get creative by moving its gab sessions outdoors.

The group, numbering about a dozen members, has gathered steadfastly at breakfast time for about a decade, with weekends and major holidays that close the restaurant excluded. Pre-pandemic, some of the guys would show up almost as soon as the glowing golden arches were switched on at the 5 am opening time.

Motorists and dog walkers along the busy commercial street have no doubt noticed the group’s new alfresco digs, with its camp chairs arranged in a safely spaced circle at the east end of the restaurant’s parking lot. Over the nearest curb is a grassy traffic island, where a lone pine tree nestled in wood chips offers shade.

“I tell you, there are a lot of people who drive through here pretty quick,” coffee clubber Bob Gamble observed.

Keeping a wary eye on passing traffic is just one adjustment the fellows have had to make. Another was moving their meeting time to 7 am because during a Wisconsin springtime, the crack-of-dawn darkness and chilliness of their usual schedule just wouldn’t cut it.

Daylight or not, though, they should get credit for braving that unpredictable weather – just wear more layers, put on a heavier jacket and carry an umbrella if it rains. The club, nicknamed the Wisconsin Department of Conversation, has not missed a day since the band got back together in mid-April, even if it’s only three or four attendees on some mornings.

“We’ve got to clean up our own mess now, though,” Gary Bellin lamented.

The tidying is doubly important because a smaller women’s club has dibs on the group’s spot at 8:30 am. A couple of the men’s wives belong to the female coffee circle, so it’s not unusual for those men to join the women for some overtime chatter.

The curbside coffee drinkers weren’t even deterred when the McDonald’s closed for a short time in mid-May after an employee tested positive for COVID-19.

They simply packed up and joined a similar, but smaller, coffee convocation at the McDonald’s/BP Travel Center on the west side. That group sets up shop mornings and mid-afternoons on the green expanse between the gas station’s parking lot and Highway 42-57.

The members of the east-side group are debating where to reconvene when winter wind chills set in, and they seem to have settled on the early-opening Scaturo’s Baking Co. & Cafe on the west side, which has resumed indoor seating.

All of the men easily qualify for McDonald’s discounted, 79-cent senior coffee. The “baby” of the group is retired attorney Mark Jinkins, age 66; the oldest is Larry Petrina of Clay Banks, who’s 81.

The men also qualify for the free refills given to sit-down customers in the dining room – a perk that’s apparently been extended to include loyal parking-lot patrons.

Petrina, on this day, slipped on a face mask to head indoors for a refill run of fresh second cups and sometimes thirds. Returning with five drinks – one in hand and four in a portable cup holder – he did his best to sort out who ordered theirs steaming black from those who took cream. That’s easier to do with booths and tables than it is with to-the-chair delivery.

“It’s like Christmas, and I opened somebody else’s present,” Berns said as he peeked inside one of the lids. “I guess it’s mine now.”

This bunch is full of familiar county names and movers-and-shakers.

Jinkins, the lawyer. Door County Supervisor Dan Austad, a former county board chair. Mike Barry, a retired UW-Green Bay administrator whose son, Kevin “Butch” Barry, is a first-year assistant coach for the Green Bay Packers. Richard Woldt, one of Door County’s leading advocates for veterans. Gary Bellin, who went down in local history as the last driver of the Door County Library’s Bookmobile. And the unofficial toastmaster/emcee: the voluble and quotable Berns, a Sturgeon Bay High School baseball coach who’s won Packerland Conference crowns at two schools and took the Sevastopol Pioneers to state in 1995.

“The only difference between John and WDOR is you can turn off WDOR,” Austad said.

State Rep. Joel Kitchens is a semi-regular but had a previous commitment in Marinette on this day. Other attendees through the years have included Jerry Kain, a retired Sturgeon Bay school superintendent; and Jon Gast, a former Door County Advocate editor/general manager and Door County Maritime Museum director.

Another former city school superintendent, Joe Stutting, once made a personal pitch to the group about an upcoming referendum at the invitation of Barry, who sat on the school board at the time.

“He was nervous,” Bellin recalled. “It was probably the biggest group he had had in front of him [during those presentations].”

U.S. Rep. Mike Gallagher also paid a visit during a previous campaign. The guys aren’t sure how Gallagher discovered them, but they suspect that his fellow Republican lawmaker, Kitchens, clued him in.

Sports and politics typically dominate their talks. Before turning attention to their interviewer, the topics du jour had been that day’s primary elections and the rumored – later confirmed – cancellation of Big Ten college football for this fall.

Austad even took some grief from Jinkins for referring to the city’s Hudson Avenue as Hudson Street because a longtime community leader such as Austad should know that the main north-south roads are called Avenues, Jinkins said during his cross-examination. Austad also got some ribbing for his stylish chair: Instead of using a canvas, fold-up model like most of the others, he lounged and leaned back in an ergonomic patio rocker.

“The county paid for it,” Bellin quipped. “And the county got it right again. He asked for two cup holders and got none.”

The world’s problems did not all get solved during that one morning gathering, but that just means there will be plenty of gossip left for tomorrow’s open-air grist mill. Whatever the subject or opinion or wisecrack, the guys are sure to raise a cup and sip to that.