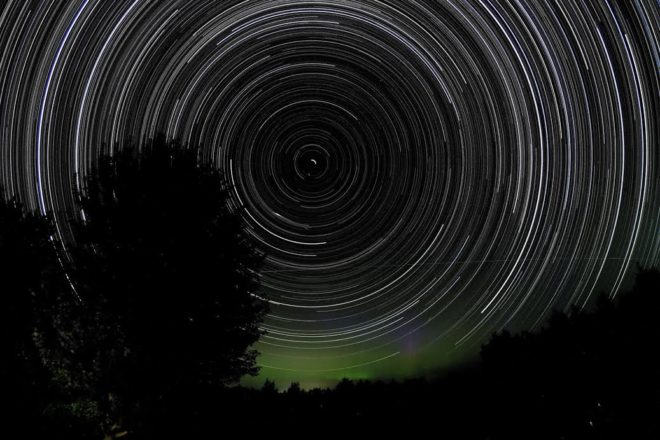 A time-lapse image that used 800 individual 30-second exposures stacked together shows how everything in the sky rotates around Polaris, the North Star. Image courtesy of Dave Lenius.

The Perseid meteor showers are upon us. The celestial event features an abundance of very fast, very bright, sometimes fireball-like meteors that streak through the nighttime sky at 37 miles per second from mid-July through August.

The Perseids are the most plentiful of the year’s meteor showers, according to NASA, with peak counts of up to 100 meteors per hour. They arrive when the Northern Hemisphere hosts warm, summer nights – perfect outside viewing from the comfort of a lawn chair. And that’s exactly the way they should be viewed, rather than through telescopes or binoculars: by lying back, looking up and scanning the sky.

“Human-eye viewing is the tool you use for meteor showers,” said Dave Lenius, president of the Door Peninsula Astronomical Society (DPAS).

The Perseids’ point of emanation, or “radiant,” is the constellation Perseus in the northern sky, next to Andromeda. This is not the source of the meteors, nor can they be seen only there. The radiant simply aids viewers in determining which meteor shower they’re viewing. The source of the Perseid meteor showers is a ball of dust, ice, rock and dark organic matter known as the Comet Swift-Tuttle.

“The Perseids result from Earth crossing the orbit of Comet Swift-Tuttle at about 130,000 miles an hour,” wrote Dr. John J. Beck, editor for the DPAS, in his column on August 2020 meteors.

“That’s why [the Perseids] are pretty much like clockwork,” Lenius said. “We know exactly when it’s going to happen.”

The meteors can be visible as early as 10 pm, but the best time to view them is after midnight or during the hours before dawn. Peak viewing was expected to occur this week, but it will be somewhat diminished during clear nights by the brightness of the waning, last-quarter moon.

“Still, many Perseids should be bright enough to be seen despite the moonlight,” Beck wrote. “A week later, some stray Perseids may still be seen, and the moon [a new moon on Aug. 18] will not be a factor.”