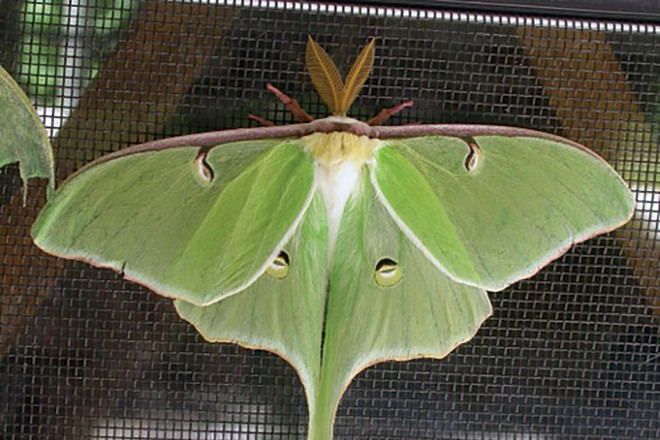 The world of darkness for a majority of people keeps them indoors, mostly in the comfort of their homes or perhaps at a restaurant, theater or concert hall.

It took several great nature writers and naturalists to introduce me to the insect wonders of darkness. The two people to whom I owe my deepest thanks were Sylvester “Suddy” Ziemer and his brother August of Kewaunee. August eventually went on to become one of the chief curators of entomology at the Field Museum in Chicago. 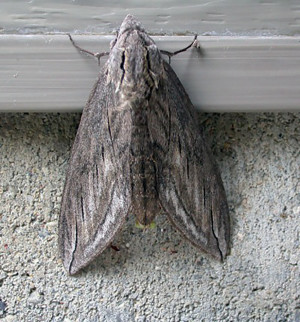 Don’t be led to believe that all moths are active only during the cover of darkness. Some of the most fascinating moths are day fliers and can be observed, for example, at flowers. My simple phenology tells me to begin looking for certain moths around the middle of June when lilacs and perhaps the verbenas are in bloom. I especially hope then to see the Hummingbird Clearwing Moth along with the Snowberry Clearwing Moth gathering nectar from the tubular florets.

I’ve had a few people in past years describe the peculiar little hummingbird they saw at their flowers. What confused these observers were the inch-long antennae on the little bird’s forehead. Yes, they were describing one of the intriguing Clearwing Moths. What’s especially wonderful about these trusting creatures is that you often can approach them to within a few feet or less for exciting observation or good pictures.

Surely you have come to recognize the tiny black and white Spear-marked Black Moth, that I simply call the Spear-mark, having a wingspan of only one and a quarter inches. Another very colorful day-flier, frequently seen resting quietly in the shade on a flat surface, such as the side of a building, is the Virginia Ctenucha (te-NEW-ka) Moth, thought to mimic wasps with its bright head and upper thorax colors.

Undoubtedly many of you readers garden and have picked Tomato Hornworms (caterpillars) off your tomato plants. This happens to be one of the more than 80 species of different Sphinx Moths that can be extremely destructive, yet so many of the Sphinx Moths, along with their caterpillars, are extremely beautiful. And that’s the feature of moths that interests me the most. 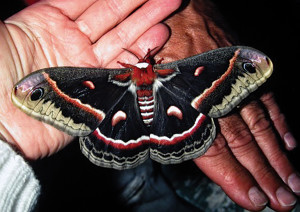 Many people raise their eyebrows when I mention the scarcity of moths as has happened during the past several years. Too many misguided humans feel that all moths are bad. I do realize that there are good and bad moths when it comes to growing various fruits and field crops. Fortunately, chemicals have been invented, which when used properly will effectively combat the larvae of the relatively small number of so-called bad moths. I wonder if the impossible could occur, with all of the roughly 11,000 species of moths in the United States casting their votes, to learn which people are good and which are bad for the moths’ environment – what the outcome would be!

It would be well at this point to list several characteristics that serve to distinguish the moths from butterflies. Most, but not all, moths fly commonly at night, have stout bodies, some spin cocoons, and their antennae are feathered or threadlike with no knob or expansion at the tips. Also they hold their wings flat or folded against their bodies when at rest.

Butterflies fly by day, have slender bodies, never spin true cocoons, and always have thin, wire-like antennae with a small “club” at the end. Their wings are held vertically over the body when at rest. 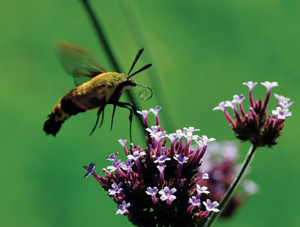 Some of the fastest flying are the Sphinx Moths, also referred to as Underwings or Hawk Moths. A number of them, such as the One-eyed Sphinx and the Big Poplar Sphinx, have colorful patterns on their rear wings, hidden when at rest but easily seen when both pairs of wings are extended. Most of these moths are quite readily attracted to bright lights as well as to “sugaring,” an easy method of capturing moths for further study or for collections.

Several reference books I’ve used extensively for identification and extended learning about this somewhat difficult group include Moths and Caterpillars of the North Woods by Jim Sogaard, Peterson Field Guide to Eastern Moths by Charles V. Covell, Jr., and the classic reference, The Moth Book, A Popular Guide to a Knowledge of the Moths of North America, by W. J. Holland. You may have to search in used bookstores for the last reference, but it is truly excellent in many respects.

I quote from the last reference, by Holland:  “I met the other day a friend, who, with quick step and alertness depicted in every feature, was hurrying along one of the avenues of the capital. I marveled at his gait, for I knew that the winters of fourscore and five years (85) rested upon his head. ‘How is it that you have found the fountain of eternal youth?’ I asked. ‘My dear boy,’ he replied, ‘I have found it by living near to nature’s heart, and by having my beloved science of entomology to refresh and quicken me in my daily walks.’” 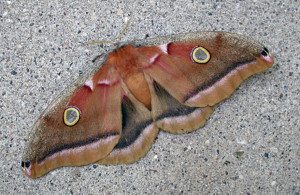 Years ago when I was about to begin teaching I decided to start a moth collection and used the simple method of “sugaring” to capture most of my specimens. I began by taking four pounds of cheap sugar and added one bottle of stale beer and several pieces of rotten fruit, such as bananas or peaches. This was thoroughly mixed and allowed to sit and “work” overnight. The following day(s) I took a wide paintbrush and painted a foot-long swath of it on several trees just before dark. I used some pieces of white cloth, tacked alongside each swath, to make finding them easier in the dark, rather than a bright flashlight, which tends to mess up one’s night vision. In later years I also used a so-called “black light” trap, it proved to be unusually effective.

Naturally the silk moths, including the Luna, Cecropia, Polyphemous and Promethea were exciting to capture or simply to observe. I always tried to be as judicious as possible and trap and collect no more than I thought I needed. Some people were very critical of my collecting. My answer to them was to look at the radiators of some cars in the morning after the cars had been driven during several very warm and humid nights. My guess was that the radiators of only two or three cars, (among thousands of others) held a hundred times more dead moths than I’d capture in a week’s time. End of accusations! 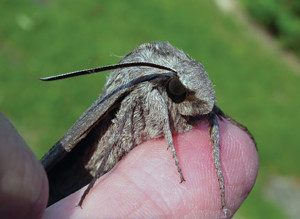 Too many of our wild creatures are being adversely affected by the actions of people today. Since moths in general are strongly attracted to light, there is concern that light pollution from man-made sources, especially sodium-vapor lights, may deter some of the larger moths, especially the Luna, from mating and may have a negative impact on their populations in urban areas. This is all the more reason for maintaining good wild places well away from city lights. Do all you can to keep Door County wild!

The more I’ve been able to photograph, study and admire the incredibly awesome life cycles of the moths, in particular those of the large silk moths, the more humble I’ve become – and the easier it is to respect all life.