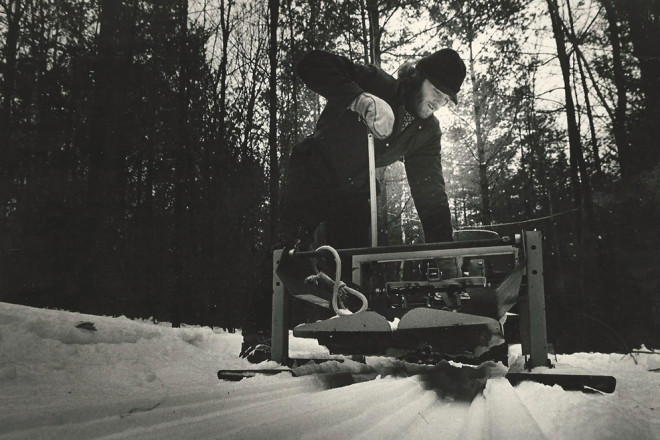 If you spend enough offseason happy hours at the Bayside or AC Tap, or work enough shifts at Husby’s or the Bowl, you’ll hear a lot of stories about the old days of Northern Door, and those old days will almost always be better than today.

You’ll hear about a time before people realized that it might be a good idea to be able to breathe the air inside a building, when many a man’s go-to move was to offer to light a woman’s cigarette at the bar, and the mark of a good bartender was keeping a clean ash tray.

You’ll hear people talk about crazy nights dancing at the Florian in Baileys Harbor and wonder if they’re talking about the same place you’re picturing in your mind. You’ll hear about the old Husby’s, when the bar was half the size and beer was a quarter. You’ll hear about bands at The Rock version 1.0, and about the lean of the Peninsula Pub before the fire straightened it out.

And eventually they’ll tell you about a place called the Omnibus, which sounds like anything but a bar, but was that and many other things from 1972 through the early 1980s.

“The Omnibus was the place to go,” recalled Digger DeGroot, who was a young actor and bartender when a hippie named Steve Kastner bought the old Nor Ski Ridge and opened the Omnibus there in 1972. “It was very ’70s. Ladies in long dresses, guys with long hair, kind of a communal feel.”

It was located at the bottom of the ski hill, about a mile south of Fish Creek, where the Little Sweden development stands today. Kastner bought the ski hill and lodge out of foreclosure to house the bicycle and cross-country ski shop he had started out on County Road F in Fish Creek, and began booking jazz bands.

“That’s what I wanted to do, but nobody else seemed to go for it,” Kastner said. 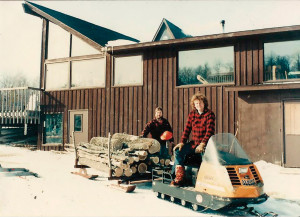 So he switched to popular music and began booking up-and-coming acts from Chicago, Milwaukee and Madison. The scene created in this bar at the bottom of the hill and the edge of the woods was perfectly in tune with a revolution taking place in the peninsula’s art scene. Artists, hippies and adults frustrated with the corporate grind were leaving the nation’s cities and going back to the land. For a few hundred in the Upper Midwest, that meant going to Door County. Many of them soon packed the Omnibus, in awe of the talent Kastner put on stage nearly every night of the week.

“Steve was way ahead of his time bringing the quality of live music to Door County that he was bringing,” said Steve Glabe, an Omnibus regular at the time.

An upstart band from Milwaukee called The BoDeans played there, Kegbelly got wild there, and Sweet Bottom would rattle the place with the occasional appearance from Daryl Stuermer, the touring guitarist from Phil Collins’ band Genesis.

A young pat mAcdonald played early gigs there, as did Uncle Vinty and the X-Cleavers, Corky Siegel, and local legends like the Booze Brothers Revue, Marvin and the Dogs, and Tony Brown. But before them all, Sigmund Snopek gave Kastner’s vision legitimacy.

“He was one of the reasons the place survived,” Kastner said.

“We played The Rock in 1967 and we were just struck by the beauty of the place and the mindset of the people in Door County,” Snopek said. “When [The Rock] closed, we were looking for another place to play up there and found the Omnibus. It was a tremendous place to play original music. People were really open-minded, you had all these young artists and creativity. It was a magical thing. We looked forward to it as one of the highlights of our year.”

Snopek wasn’t the only musician in awe of the place. Soon major acts from throughout Wisconsin and the Chicago area were drawn to the peninsula, pulled here in part by the meandering journey.

“Back then, there was no highway,” Snopek said. “It could take five hours to get there from Milwaukee. You had to go through all these little towns, Sheboygan, Two Rivers, Algoma. The remoteness of it made it feel special, too. It was really like going to another country.”

At the end of the road, they found a ramshackle combination of buildings pieced together through the years. The old ski chalet was attached to an A-frame, originally built as a roadside sign, that became a defining characteristic of the bar. Inside were cozy nooks walled with rough-hewn cedar and warmed by five wood-burning stoves and, in back, soaring windows framed the ski hill behind the bar, ringed by a massive deck.

“There was no other place like it,” Glabe says. “It was a gathering place when other bars were drinking places. There were plants, big windows, a lot of natural light. You’d hang out playing backgammon and Risk.”

Unlike many bars that earned their loyalists by never changing, the Omnibus earned its patrons by virtue of being a perennial work in progress. Kastner was an owner long on ideas and a little short on execution.

“Steve was always adding something,” Glabe says, doubtful that it was always permitted, but in 1970s Door County there weren’t many who cared if it was. “He always had another idea. He was a guy who was good at a lot of things, but not truly great at them.”

“I moved here from Illinois right out of college in 1970,” Kastner said. “I was a summer kid up ‘til then and just wanted to live here year round. The first couple of years the snow was up to our eyebrows. One year I lived on less than $500. We grew all of our food, rode our bikes. It was the whole hippy dream. I had no plan to be a businessman.”

Kastner was “this hippy selling bikes out of a barn in Fish Creek,” as he remembered. Cycling was gaining popularity, and Kastner said his lightweight European 10-speeds were flying out the door. The barn was located outside of town though, and he wanted to move his business to the main drag.

But it was the bar that took off and became the focus of the operation. In addition to live music, he brought in outlandish standup comedy acts. At one point he created an amphitheater in the valley of the ski hill, where Snopek debuted his first rock opera. And years before cross country ski trails zig-zagged through the county’s state parks, Kastner built a one-mile loop lighted cross-country ski trail on his land.

“Herbie Hardt was the first guy who thought to use the old horse trails for cross country skiing,” Kastner said. “Back then it was maybe me, Al Johnson and Roy Lukes who had cross country skis.”

Soon the bar flies were stepping into them, too.

“You’d have a beer, then go out and ski a lap in the night,” Glabe says. “It was incredible.”

In the summer, Kastner brought pro cycling to the county for races and organized impromptu local races as well, years before anyone used the phrase “silent sports” as a marketing tagline.

The innovations earned a dedicated following, but not everyone loved the place. After a couple of seasons, Kastner sold the unprofitable ski lift, marking the end of the Nor Ridge Ski Hill and earning the ire of many locals.

“It was tough to make money on a ski hill back then,” DeGroot recalls. “Snow-making equipment wasn’t what it is today, and the hill faced the wrong way. It was designed facing west, so the snow melted every day. Plus, there wasn’t much open up here back then besides the Bayside and the gas station. There weren’t too many winter visitors. After Labor Day you could sit naked in front of the Bayside and nobody would notice.”

“Probably half the county resented him for closing the hill,” Glabe says.

“People hated me because I was the guy who tore Nor Ski down,” Kastner recalls. “But it was never profitable. I didn’t want to sell the lift, but it was the only way to survive.”

Had the hill faced east, and had it lasted another 10 years to see the explosion of snowboarding in the winter and mountain biking in the summer, perhaps it would still be ferrying people up the hill. Door County will never know.

It’s a testament to what did survive, however, that so many still look back on the Omnibus so fondly. While many of Kastner’s sidelights have faded from memory, the bar and the wild nights had there have not.

“It was a pretty loose affair as far as permissiveness,” Kastner recalled. “As long as people did whatever they did discreetly, we didn’t police them. In nine years, we didn’t have one bar fight. There would be 300, 400 people dancing, partying, and at the end of the night, somehow people got home safely.”

“It was such a laid-back place,” Glabe says. “And as much as I respect and love our local musicians, it was really incredible to be sitting in a Fish Creek bar and see the music he would bring up here.”

But as it goes for so many bars, the glory days didn’t last. By the early 1980s the bar scene was changing (“When Reagan became president, the country became a lot more conservative,” Kastner said. “The whole culture changed.”) and the peninsula was changing, becoming more polished with less room for quirks and characters. In the midst of this, Kastner battled his own personal hurdles.

“My whole life blew up in 1982,” he said. “My mom died of cancer. My dad, who was my business partner, was lost. My second wife was having an affair with my bartender.”

“The Omnibus ended kind of with the end of an era,” DeGroot said. “Cross country skiing had been huge, but it died for a while. Steve turned off some locals when he shut down the ski hill. Bands got expensive, and the party atmosphere changed.”

By the fall of 1982, Kastner and his dad decided to sell, and a month later they accepted an offer.

The Omnibus existed for a couple more years, but it wasn’t the same, for better or worse. Eventually the building was offered to the Gibraltar Fire Department to burn in a training exercise, and with it, a remnant of Door County lore was gone.

DeGroot said the demise of the Omnibus left a huge hole in the music scene for years.

So do a generation of folks who remember a bar that was very much a reflection of the changing sensibility of the peninsula.