When Louie Sohns was a little boy on Maple Grove, he’d come home from school in spring and collect maple sap from the trees he had tapped, filling two milk cans he hauled in his little red wagon. He’d hitch up his dog, pull his load along the road to Walter and Bertha Reinhard’s sugarhouse and dump his sap into their 5 by 16 foot wood fired evaporator. The Reinhards kept track of his contribution, paying him back at the end of the season with finished maple syrup.

“They always gave me more syrup than my sap would have made,” Sohns recalled. “They got a kick out of it, of me and my dog.”

Now, more than 60 years later Louis Sohns is still tapping trees on the land where he was born and boiling down sap to make maple syrup.

Louis and Betty Sohns’s children, Steve and Evelyn, were raised with this spring tradition. Steve, who manages Hammersmith’s in Sister Bay, still helps out when he is needed, as does his wife Sara and their three-year-old daughter Gwendolyn. Evelyn, who is the secretary in the Gibraltar High School office, and her husband Charlie Eckhardt are actively involved in the syrup production, too. 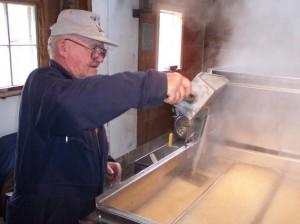 Louis Sohns checks the readiness of maple syrup in the final stage of the evaporator.

“I do this because it is a part of who I am,” Evelyn said. “I might get home from work and be crabby, but give me an hour, and I’m out gathering sap with my family, and I understand why I’m doing it, and it all makes sense!”

She especially likes the spirit of family and community that she experiences during the maple syrup season. “At night people see the smoke from the sugarhouse and know we’re working,” she continued. “They’ll stop in, sit around, talk and tell stories. Sometimes we’ll make pancakes. It’s a social thing. You never know who will show up. It’s pretty special!”

Maple trees are tapped in the spring when temperatures are below freezing nights, but rise above 32° during the day (ideally 20° / 40°) for then the sap flows. “In the past we never tapped before the 20th of March,” Sohns said, “but with global warming that’s changed. Now we tap if we see cold nights and warm days in the forecast.”

The operation is weather dependent. Once the Sohnses tapped trees in late February. The season has been as brief as a week and as long as six weeks. “It’s never long enough!” Evelyn said.

When the maple trees begin to bud, the season is over. The “buddy sap” is stronger and has an off-taste. “My wife says to shut down when she can smell the aroma of buddy sap,” Sohns said.

This year the family tapped over 700 trees from which they will gather about 4,000 gallons of sap that will boil down to about 100 gallons of syrup. While the ratio on average is one gallon of syrup from 40 gallons of sap, the sugar content of sap will vary.

Although Sohns’s father Walter made maple syrup for his family’s use, the Reinhards were his mentors in commercial production. Reinhard collected sap from 3,000 taps in their maple trees when Louie was a boy. Sohns still uses 1940s era taps and sap buckets that he acquired from Reinhard.

Sohns’s operation is a blend of traditional operations along with the selective use of modern technology. For example, many of the maples on his farm are hung with galvanized 12 quart buckets, a green strip painted halfway around one side and a red one halfway around the other. On the “green” day when a pail is dumped into one of the 55 gallon plastic drums located about the woods, it is reversed to red and returned to the tree, letting the sap collectors at a glance keep track of the emptied buckets.

While the color-coded bucket system dates from the Reinhards, they would be astonished by the system of plastic tubing that Sohns uses in another section of his maple grove. A network of tubes attached directly to taps in the trees leads to collection tanks, streamlining the process.

Sohns uses a 4-wheel drive truck mounted with a 400-gallon tank, along with a boom and a vacuum device that he created by modifying a sump pump, to gather the sap. “It really works slick!” he said. Sap is suctioned into the tank on the truck from the various collection stations.

The one-car garage sized sugarhouse Sohns constructed from new and salvaged materials. The building has been expanded and remodeled over the years as the operation has become modernized.

The sap in the tank on the truck is pumped into another tank on a roof-high platform at the sugarhouse for gravity flow into the Patriot Raised Flue Evaporator.

“I remember three years ago when our little evaporator was getting bad,” Evelyn said, “and my dad asked, ‘What do you want to do? I’ll get rid of it unless you want to keep the operation going.’”

She made the commitment, in part because of her niece Gwendolyn who said she wants to become a part of the operation like Aunt Evie. Sohns purchased the new evaporator that he installed with the help of his son Steve.

“Bertha Reinhard lived to be 103,” he laughed. “I have to live to be older than Bertha!”

The evaporator is fired with wood, an efficient airtight chamber with a rheostat to adjust the airflow and keep the boil at a constant height, evaporating about 75 gallons of sap per hour.

A float box regulates the flow of sap from the platform tank into the flue pan where the sap is circulated through flues, the first stage of the evaporation process.

The second stage occurs in the flat pan where the denser sap is circulated over an “accordion” surface until a “32” reading on a hydrometer indicates that the sap has become 100% maple syrup.

Sohns recalls that Walter and Bertha Reinhard used a drip test to determine the proper viscosity of the syrup. “We’d test it with a hydrometer,” he said, “and it would be right!”

The finished syrup is drawn from the evaporator, filtered into a collection container and then stored in milk cans to await the canning process during which it is reheated to a temperature of 180-200 degrees in a canner. Next the syrup is drawn off into a water-jacketed filter tank from which heated bottles and cans are filled for the final step of the canning process. When the syrup cools, a vacuum seal is created.

Before the syrup is canned, the product has been filtered five times.

“We have customers from all over the United States,” Sohn said. “They come back year after year because they like the taste of our syrup.” When the Sohns Sugar Bush sign is displayed on Maple Grove East Road, maple syrup is for sale; when it is taken down, the syrup has been sold.

The distinctive taste results because of the choices Sohns makes in the production of his syrup. He shakes his head at the practices of some large commercial syrup makers who pass sap under an ultraviolet light that acts as a preservative for storage before the boil; or who use an osmosis machine with very fine filters to remove about half of the water content in the sap before it is boiled; or who use a vacuum along with the tubing system to draw the sap directly from the tree roots.

“People ask me, ‘Why does your syrup taste so different?’” he said. “It’s because I’d rather do it the way the Indians did.”

Louis Sohns is a resourceful traditionalist who was born in the house where he now lives, the son of dairy farmers Walter and Ella Sohns. When Louis became a welder in the Sturgeon Bay shipyards, he raised beef cattle on the family farm, and then, after 38 years, retired as superintendent of the welding department at Bay Ship.

And during all of this time he has been making maple syrup each spring, beginning as a boy with two milk cans, a little red wagon, and a dog, and ending, he laughs, not until he is 105!

Maple syrup is not just for pancakes and waffles.

(1) Maple tea. The Sohns family makes maple tea by steeping a teabag in a cup of sap that is about 40% evaporated. The ambience of the sugarhouse adds to the enjoyment of the hot beverage, which can be approximated at home by sweetening hot tea with maple syrup.

(2) Maple sundae. For a special treat, the Sohns family will take a carton of ice cream to the sugarhouse and make sundaes topped with hot fresh maple syrup. Make this at home by heating maple syrup in your kitchen and closing your eyes while you imagine the sugarhouse.

(3) Cereal. Both Louis Sohns and his son-in-law Charlie Eckhardt sweeten their morning cereal with maple syrup.

(4) Snow cone. Traditionally warm maple syrup has been dribbled on fresh clean snow. Make a similar confection by substituting ice pulverized in a food processor for the snow.