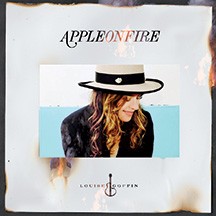 The song could have been about a guy coaxing someone back to new life after a failed relationship, or it could have been about offering someone an acid trip (“Take a giant step outside your mind.”). That second option certainly seemed the case when the song was covered that same year by Los Angeles band Rising Sons (featuring Taj Mahal and a 17-year-old Ry Cooder). Mahal went on to record a completely different folksy take of the song on his 1969 double album Giant Steps/De Ole Folks at Home.

And now it has new life as the lead tune on the new EP Appleonfire by Louise Goffin, the daughter of the Goffin/King songwriting team. She invests her parents’ song with new meaning and dignity. It opens with grand piano rather than jangly guitars, and Jakob Dylan joins her on vocals. Compared to previous versions, hers has a compelling dirge-like quality that invests the tune with mystery.

“It had a lot of depth to it that had never been expressed,” Louise said recently by telephone from Los Angeles. “Maybe because it’s my resonance with my father and his lyrics. Every word seemed to mean more to me than a pop vision of doing one of his songs.”

Which makes sense when you know that Appleonfire is a tribute to her father, who died on June 19, 2014, just a few days after Louise had returned from the Steel Bridge Songfest to start touring and promoting her new CD, Songs from the Mine.

“At that particular Steel Bridge, I had brought my kids and they were writing, too,” she said. “I remember the final day was Father’s Day and I was trying to reach my dad on the phone, and not being able to get through in any meaningful way, meaning a couple of words passed. It’s all a little bit foggy to me. There was Steel Bridge, then I came home and my father died.”

She learned of her father’s death just as she was about to go to Austin to promote her new record with a radio interview and a house concert.

“I ended up going to Austin anyway, and I played ‘It’s Not the Spotlight,’ which I had never played before. I sat at a piano and learned it. It’s a song he sung. He wrote it with Barry Goldberg and recorded it in the ’70s at Muscle Shoals on an album called It Ain’t Exactly Entertainment. People loved it. It felt really emotional and meaningful. And then I came back to LA and there was a memorial that was held. Barry Goldberg, who was his co-writer on that song, was there. I said, ‘Hey, Barry, I just performed your song, and he said. ‘We should record.’ So that’s how it started, that conversation and that song. Songs from the Mine hadn’t even come out and I was ready to start an EP. To make two records in one year is a real changing pattern from what it has been.”

After more discussion, she and Goldberg decided to co-produce four songs.

“I suggested we do a Goffin and King song,” she said, and “Take A Giant Step” was the one she chose to do.

“I asked Jakob to sing on it because we had a great sound when we sang a Goffin-King song at MusicCares in January of 2014,” Louise said.

The two other songs slated for the EP were two Louise had just co-written at the Steel Bridge Songfest, “Higher Than Low” and “Everything You Need.”

She pulled together a band of some of the best-known session players, including Jim Keltner, Bob Glaub and Val McCallum.

All she needed was a studio, so she stopped at Jackson Browne’s.

“But he wasn’t there,” she said. “An assistant said Jackson was on the road right now.”

She explained that she was doing a tribute EP to her father and would like to record at Jackson’s studio while he was on the road.

“They were going to find a day for me,” she said.

Louise decided to call one of her Steel Bridge songwriting partners, Chris Aaron, to tell him she was going to record the song they wrote, “Higher Than Low.”

“He goes, ‘Jackson’s sitting right next to me. Right now.’ That was just crazy synchronicity. He had played a show in Madison. Then I got the call the next day from the studio manager saying there was one day when nobody was using the studio. It was really miraculous because all the musicians gave me their crazy busy schedules, and it all overlapped on that one day where we could all get in. It was really meant to be. It was that little Chris Aaron moment. (Chris Aaron died suddenly on Oct. 15, 2014.) Who knew that when I called Chris he would be sitting next to Jackson? It was pretty amazing.”

The four songs were cut mostly live with just a few overdubs.

“We had the four songs and I just kept thinking, it’s not really an EP with just four songs. I needed two more songs,” Louise said.

For the fifth, she picked a song she was unaware of until someone posted it on YouTube the day her father died, “If I’m Late.” The YouTube posting was of a demo her parents had cut of the song.

“I asked Joseph Arthur, who I had never met, if he would sing on it,” she said. “Went to Brooklyn. We had a very harmonious day.” They made a video while recording the song, which was released on Feb. 11, 2015, which would have been her father’s 76th birthday.

The final song became the most problematic.

“It’s a song I had written with my father in my 20s, ‘I’m Not Rich, I’m Not Poor.’ It was just sitting on a shelf. It was a forgotten song. I said to him we should do something with it. He said, ‘Yeah, let’s demo it.’ But we never got around to it. He was talking about demoing it in the last year or two.

“I spent more time recording that song and it has the least amount of music on it,” she said. “The reason being, I had gospel singers come down and I thought I would do it like The Temptations. Even though they are amazing singers, it just sounded wrong. Then I thought I’d put strings on it. The track kept kicking everything off of it. The only thing that stuck was my vocal, the piano and a keyboard and percussion. The version you have, I was listening to that and I thought ‘It’s not done. It’s not done,’ so just last night I remixed it. Now I think it finally does what it needed to do.”

“I’m really happy with it,” she said. “I’m glad I did this in the midst of my grief and didn’t over-intellectualize it. It wouldn’t have been so honest. It’s a very honest record.”