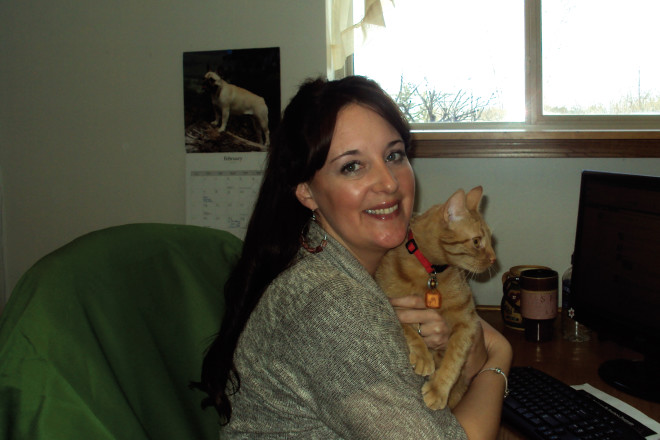 Carrie Counihan’s office is fairly typical:  a large desk with a few stacks of paper, a framed photo of her and her husband, Dave, a couple of blue cushioned chairs, and…cats. There are cats just lazing about. A grey one lies asleep on a file cabinet, a tan one stretches on a carpeted structure, and a black cat speckled with orange, Eddie, daintily leaps from the window sill, pauses by my ankles before jumping into my lap with sleepy green eyes that say, “You’re cozy. I’ll sit here.” Soon she is purring and I am falling in love.

How does a staff member of the Humane Society accomplish any work with literally dozens of cats and a handful of playful, adoring dogs in the work place? But Counihan, the Executive Director of the Door County Humane Society, has been surrounded by animals since her childhood in Kentucky.

“The moment I was born, they were just there,” she said. “We always had cats and dogs. My mom had horses. It surprises me when people say they are not animal people. Animals are just in my life.”

Not only is Counihan surrounded by animals in the workplace, but also at her home, where she and her husband (who is allergic to cats) have a Chihuahua/Maltese named Bucky, a black lab named Allie, a French Bulldog named Gunnar, and a rabbit named Rex.

However, her position calls for her to care and connect with not just animals, but also people. The Door County Humane Society is “a network for everyone who loves animals,” she says. “We love animals, but we love people just as much.”

With enthusiasm, she stresses the importance of the society’s staff and volunteers:  “They do a little bit of everything. Some help with just fundraising, some clean, some sit and play with animals. We want to find something they are most connected to. [The volunteers] help the staff survive. They are amazing!”

Surrounded by dedicated people, Counihan has time to focus her attention on her duties. “I manage staff, manage the facility…fundraising…contacting donors and letting them know what’s going on…school programs, media…managing budget,” she says, adding, “Working for a nonprofit is a lot of time and energy, around the clock – you really have to find something you connect with. You put in a lot of hours.”

Counihan attended the University of Kentucky to earn a degree in nonprofit management. While attending college she volunteered at animal shelters and participated in theater. Animals and theater were her two passions. After graduation, she lived in Chicago and worked at the famous Steppenewolf Theatre.

“I could never could get over animals,” she says. “I wasn’t feeling satisfied. I want to feel like I’m making a difference.”

Counihan had visited Door County, and “fell in love,” she says. “I saw the job in the Door County Advocate. On a Thursday I sent my résumé. Friday they called. Saturday I drove up to Door County and next Thursday I took the job. I haven’t regretted it for a second.”

This July will mark her sixth year as executive director. She admits she “didn’t know what to expect” when she took on the position. “I am always learning something new,” she says. “I knew it was the right match.”

Tom Bronsky, Vice President of the Door County Humane Society’s Board of Directors, agrees. “She has had such an impact,” he says. “Public awareness and support has increased tremendously. It’s a credit to her leadership. She deals with real issues with her head squarely on her shoulders…squarely. It would be difficult to find someone else to take her place.”

Counihan reflects on the variety of emotions she encounters on a day-to-day basis – whether someone is dropping an animal off they can no longer care for, the facility receives mistreated animals, or a family is searching for an animal to take into their lives. What makes her position rewarding is “when an animal is going to a home,” she smiles. “When an animal leaves, we all plaster against the window and watch when they get in the car.”

During our interview, with a cat snug and warm on my lap, I admit that I consider whether or not I could take an animal home with me that very day. There are 21 cats loose as I tour the facility, designed in 1999 to house 28 cats. “We have 70-something cats right now,” says Counihan. “Lil crowded, but we make do.”

Silver kennels with cats and kittens line the front entrance of the building. “It’s all as one,” she says. “The adoptive space and the business space.”

For all the cats, kittens, dogs and puppies that pass through the halls and live in the building, it might surprise one that the space smells so clean, like fresh laundry (blankets and towels are washed everyday) and bleach (they go through about four gallon-sized containers a day). Most of the supplies are donated, to keep costs at a minimum, and “everyone is cross-trained,” says Counihan, as she leads me through the building. “We do as much as we can by ourselves. We’re very self-contained, but we work very closely with all vets in Door County.”

“The shelter is running 365 days a year,” she says. “There is staff on site from 7 am to 9 pm everyday.” The facility relies on 15 staff members, a volunteer board, three coordinators, and, of course, volunteers, along with over 700 members and supporters.

As we continue on our tour, we encounter Shirley, an energetic Bluetick Coonhound, propping her front legs over a partition. She is in the staff’s dining room. Again, the facility is a quite cramped.

“We keep the dogs out of the cage as much as possible,” says Counihan. In the next room over is Bear, a sweet little pug, who presses her scrunched face against the plastic partition.

While we stroke Shirley’s long, floppy ears, Counihan explains how well the staff gets to know each of the animals, and therefore provide a good match based on what the families say they are looking for.

“In traditional shelters they found that pacing in front of the dogs really stressed them out. So, we have a Family Room, where families can meet dogs they are interested in. That’s what’s best for the animals and the families really see dogs at their best.”

Every day, the staff exercises the dogs by taking them on long walks or pairing them up with a buddy and letting them loose in the back yard.

After the tour, Counihan pulls out a folder detailing their Capital Campaign. “We know where we need to go,” she says. “I’m very impressed with how much we’ve accomplished. We can’t make that next leap without going forward and expanding.”

The expansion would double the space, providing an education room, a volunteer center, more space for cats, a kennel viewing area, and more.

The project will be quite the undertaking, but Counihan maintains her optimism, adding, “Whenever I’m feeling stressed, I can just pick up a cat. You leave here smiling.” (And, in my case, I leave analyzing the pros and cons of bringing Eddie and Shirley home with me.)