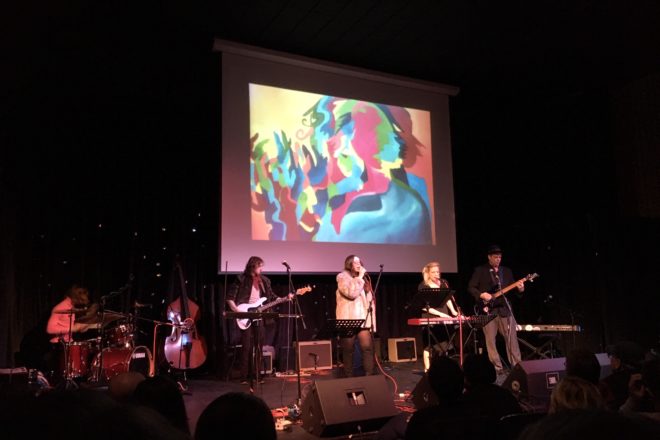 “Love on Holiday” was a magical experience. Photo by Celeste Benzschawel.

Songwriting is not always easy. In fact, it can be pretty hard. There are moments when you can whip out a chorus in 10 minutes, but also times when you spend days hung up on a single word.

As someone who’s been on that side of the songwriting page, I was completely mystified during the Feb. 8 Love on Holiday performance because these challenges were not at all apparent among the songwriters. My only regret after attending was not having attended before.

This show truly had it all, and it brought me close to tears. (I would have sobbed if I hadn’t been in public.)

Orchestrated by the Holiday Music Motel, Love on Holiday is a songwriting collaborative that brings together a group of musicians to write songs based on works of art created by community members and beyond.

The writers have a week to come up with a minimum of three songs created jointly with three different groups of three people. They arrive on a Sunday from all over the country to spin a bottle to determine who will be in their first group. Then they spin again on Monday and Tuesday, forming their final two groups.

The trios then spin an additional time each to be paired with a piece of art that will inspire their songs of love, love gone awry and love gone away.

But it doesn’t end there. Each song is then professionally recorded in one of three studios – either in the motel or the Tambourine Lounge building – to be released to the public for purchase a year later.

Before attending the Feb. 8 show, organizers melaniejane and pat mAcdonald invited me to sit in on a listening session in the Tambourine Lounge on the Thursday prior, when all of the writers gathered to listen to some of the recordings that had been done that day or since the previous session.

The atmosphere in the room was brimming with a sense of family and friendship. Writers walked into the lounge laughing about inside jokes that had come out of the week and huddled together to listen to the work of their colleagues.

No one spoke during the playbacks, except for a “Yeah!” here or an “Oooooh!” there. People mouthed the lyrics to their own songs. Listeners nodded their heads with the rhythm. The support was almost palpable.

Then the three writers behind each song had an opportunity to share who was featured on the track, which piece of art inspired the song, and what their particular songwriting process was like.

I was in awe even during the listening session, and I couldn’t wait to link more faces to the songs at the show.

The Feb. 8 performance began at 7:30 pm and went until 10:30 pm, with one intermission. It was a long show, but it didn’t feel that way. Every song had people on the edge of their seats.

Love on Holiday’s Saturday shows also have a history of weaving in extra songs that didn’t make it into the lineup during the performance the night before, or songs that were written outside of the bottle-spin groups, and a few of those treasures were played later in the night.

Audience members around me cried, laughed, clapped and praised their way through the show, and it all came to a final hurrah with the last song. Near its end, every writer, plus melaniejane and pat mAcdonald, got on stage to sing and play together in a giant send-off.

It was a truly magical experience, and I walked away feeling more inspired than I have in a long time. I’m counting the days until the CD release and keeping my fingers crossed to hear some of these tunes – and tunes past – on Steel Bridge Radio.