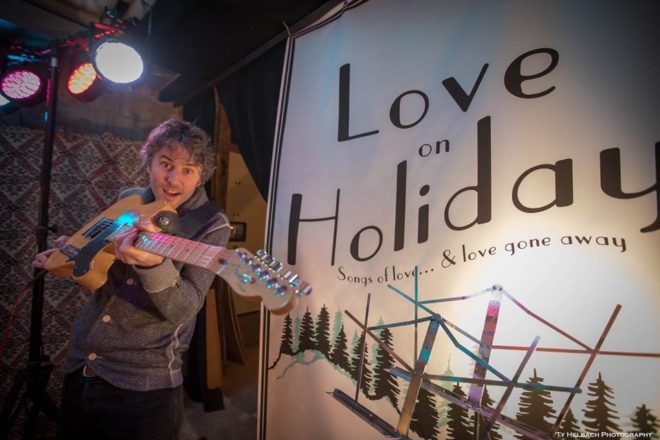 Vincent Gates in the Tambourine Lounge during 2019’s Love on Holiday. Photo by Ty Helbach.

When pat mAcdonald was songwriting with Japanese composer Ryuichi Sakamoto (The Last Emperor; Merry Christmas, Mr. Lawrence; The Revenant) during the 1990s, he had to translate Sakamoto’s lyrics into English.

Instead of seeking a literal translation, Sakamoto provided mAcdonald with pictures to better capture the essence of what he was going for. It made it easier for mAcdonald to write an English version.

The experience inspired mAcdonald to incorporate visual-art pairings into the annual songwriting event Love on Holiday, for which he serves as the creative director. This visual-art pairing is what sets this event apart from its sister events, the Steel Bridge Songfest and Dark Songs, all hosted by the Holiday Music Motel in Sturgeon Bay.

As with the other two musical events, Love on Holiday musicians spin a bottle to be placed in groups of three to write together over the course of a week. Their goal is to write songs about love and love gone away, then perform them at Third Avenue Playhouse in Sturgeon Bay on Feb. 7 and 8.

For this event, however, songwriters spin the bottle an additional time to be paired with a piece of art that they will write about. The song basically writes itself after that, mAcdonald said. Instead of starting from scratch and staring at a blank page, the art piece forces writers to pull out its story. It’s like a puzzle, he said.

The songwriters were initially wary of the idea of adding art to the mix.

“At first, the whole idea of writing with art was a thing that nobody had done yet of the people who come here, and they were a little scared at first,” mAcdonald said. “Or thinking, ‘Oh, it’s going to complicate things. We love what we’re doing. This might be a fly in the ointment.’ But they ended up loving it.”

The art element was also a way to draw more people in. Love on Holiday takes place during a slow time of year in Door County, yet the theater is expected to be filled: With a collaboration between the arts community and the music community, the seats fill themselves. Not only is it a thrill for the community, but it’s addictive for the participants, said melaniejane, the event’s organizer and art curator.

“It’s such a profound experience,” she said. “[Artists] come to the show, and they’re like, ‘That song came out of my piece.’ They want to do it every year.”

A lot of musicians do return every year to join the new faces. It’s an opportunity for many to write with people they’ve never met outside of their predominant genre. It takes writers out of their comfort zones, and they learn a lot.

“You learn a lot from a lot of people,” mAdonald said. “It’s like all of a sudden you’re learning by osmosis.”

How does one prepare for such an event? For mAcdonald, it’s about getting into a songwriting frame of mind. Though he doesn’t jump in with spinning the bottle, he works with groups when they’re stuck and might need an outside perspective.

Make Keene, who’s participating in his second songwriting event after 2019’s Dark Songs, said, “Now that I know the group, I’m less nervous, but I guess the only way you can prepare is by practicing. These events are things you have to be invited to in order to participate, so you want to bring the goods and leave the ego at home.”

This sense of collaboration prevails on the art side, too: The work is found through submissions, searches and community recommendations.

“It’s all about connections and bringing more people together,” melaniejane said. “We bring the musicians together so they form connections with each other and with the community, but to take it to another level and bring in another art discipline is really rewarding.”

This year, there will be artwork created by a 10-year-old, three local high school students and established artists such as Fred Stonehouse. The artwork will be displayed at the new SWY231 Gallery next door to Third Avenue Playhouse, and audiences can view it before each show on Feb. 7 and 8.