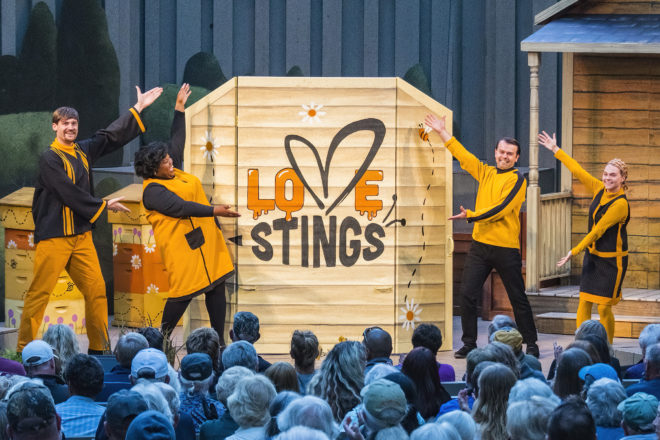 To open its 52nd season, Northern Sky Theater has debuted the world premiere of Love Stings, a new musical comedy based in Door County. With toe-tapping music and jokes about County Roads E and EE, it’s a family-friendly delight that makes you feel right at home, whether Door County is home all year long or just for a weekend.

The musical takes place on a 1960s bee farm, where a trusting, idealistic Bill Zapper, played by Doug Clemons, is planning a surprise wedding for his bug-hating actress fianceé, Claire Fairweather, played by Molly Rhode.

Bill spends time with the farm’s owners, Nutty and Elizabeth Boyd, played, respectively, by Zachary Thomas Woods and Claudia Dalhman (the understudy for Corrie Beula Kovacs). Bill chose their bee farm as the wedding venue to secretly give them an uncle’s misplaced inheritance.

He feels too guilty to keep the money and needs an extravagant wedding to hold on to his fianceé, so he combines the two. But, time away from Claire and the city makes him doubt whether marriage is what he wants or what he should want.

Love Stings is 90 minutes of laughter and earworm songs. It’s heartwarming without taking itself too seriously and has lovable, engaging characters. And, although sandwiched between conga lines and many bee puns, seeing the characters come to terms with who they – and the people around them – are leaves a lasting impression.

Through the lens of bees, honey and a science-fiction fever dream, the play explores the difference between the person you’re told to be and who you are, the person you’re told to love and whom you do love. And although, initially, it’s an easy, fictitious musical, it covers very real, modern topics such as parental pressure, financial security versus happiness, and the stigma that still exists for single working women.

The descending night at Northern Sky’s iconic outdoor amphitheater in the depths of Peninsula State Park makes for an unforgettable experience, and it also makes the audio and lighting design that much more impressive.

The set, though simple, is impressively detailed, and the costumes practically buzz. With the live band, the music isn’t flat or rehearsed to death either. Instead, it’s as lively as the characters.

The answering-service battle between Bill and the operator, played by Lachrisa Grandberry (who also plays Jeri Nichols), captures his anxiety and her disbelief flawlessly. Not to mention the arrogant conga line of Doc Dudley, played by Alex Campea.

With catchy music, talent galore and a backstage crew that knows how to put on an outdoor show, Love Stings is a performance that’s as sweet as honey.

The show will run until Aug. 26 on Mondays, Tuesdays, Thursdays and Fridays, 7:30 pm, with a fireworks-friendly performance July 4, 6 pm. Find more information and ticket details at northernskytheater.com.